On Thursday morning, the Prep School came together during Reveille to honor Pearl Harbor Remembrance Day with a Memorial ceremony.

The following was read off by a group of C/C's. 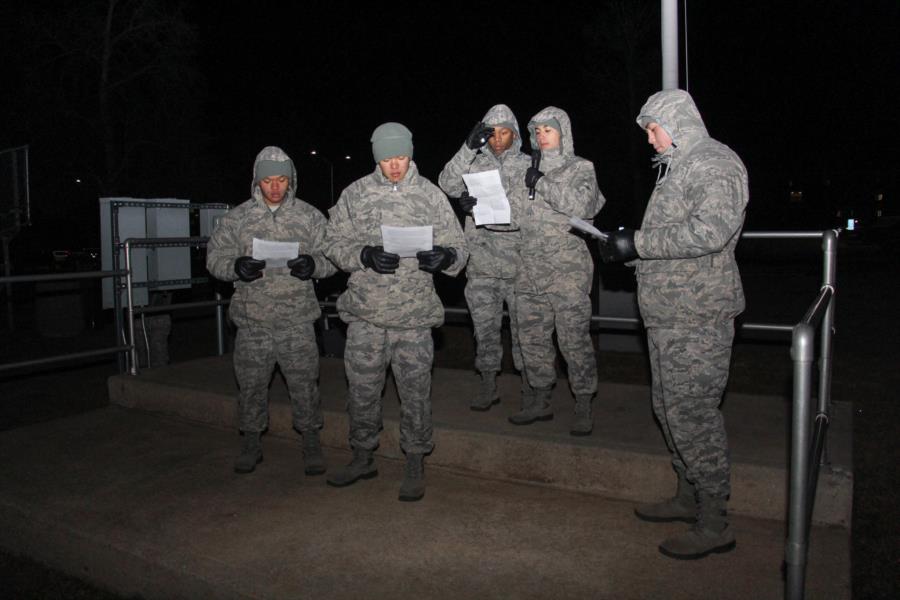 "While the timing and location of the Japanese attack on Oahu was a surprise, Washington and the U.S. Army planned for a war with Japan that might begin at any time. The War Department viewed the Philippines as the probable target of any early Japanese strike. An attack on Hawaii appeared much less likely. Hickam’s wings therefore sent a portion of their aircraft to the Philippines. Further, believing that the most likely threat against U.S. forces came from Japanese agents or sympathizers, not a direct attack, Army officials ordered an alert meant to guard against sabotage, not an air or naval strike.

Before the alert, the Hawaiian Air Force had dispersed its aircraft for quick take-off in case of an attack warning, but the sabotage alert stipulated that aircraft at Hickam, Wheeler, and Bellows Fields park wingtip-to-wingtip for security. Units moved ammunition for antiaircraft emplacements and aircraft guns to central bunkers, where it could be more easily guarded.

Thus, U.S. airfields held easy targets for the Japanese planes that appeared just before 0800, first over Wheeler Field, the headquarters of the Hawaiian Air Force fighter command. Japanese bombers and fighters caught dozens of P-36s and P-40s on the ground, unarmed and unprepared for take-oft; over half were lost. Facing no resistance, Japanese fighters came in fast and low, only 50 to 75 feet off the ground. Colonel William Flood, Wheeler base commander, said, “you could almost hit them with a rock.”

“The roof of the barracks was burning, there was smoke everywhere and the smell of burnt powder in the air. The airplanes on the hangar line were burning, there was debris and dirt from the bombs scattered everywhere. I turned and saw a man from our squadron named Bernard Mulcahy. He looked at me and I said, ‘Bernie, I can’t believe what is happening!’ He replied, ‘It’s happening. We lived more in the past two hours than we did in our last nineteen years!’”

A short time later, dive-bombers and fighters struck Hickam Field simultaneously with the attack on Pearl Harbor. The Japanese bombers attacked Hickam’s hangar row and flight line first, blasting the B-l 7s and B- l 8s, which were parked so close together that one hit caused several planes to burst into flame. Bombs and bullets also struck the Big Barracks, killing men at breakfast or still waking up that morning.

“I’m laying there with my nose in the dirt just praying, and as I look up these Jap planes are fish-tailing and spraying the area. You could see the bullets as about every fifth one was a tracer. I just prayed, God how I prayed.”

The attacking planes also did considerable damage to the rest of the base. Hangar 35, Hickam’s largest, was gutted, as were several others. Japanese bombs breached the main water line for the base, so fires burned uncontrolled for much of the day. Numerous support buildings, including the entire Engineering and Aero Repair offices, were destroyed.

“We looked up and saw several bombers in formation coming towards us from about the Hawaiian Air Depot and coming across the old baseball field, water main, big barracks and large mess hall. . . as the bombs came closer and hit I just dove for the ground.” 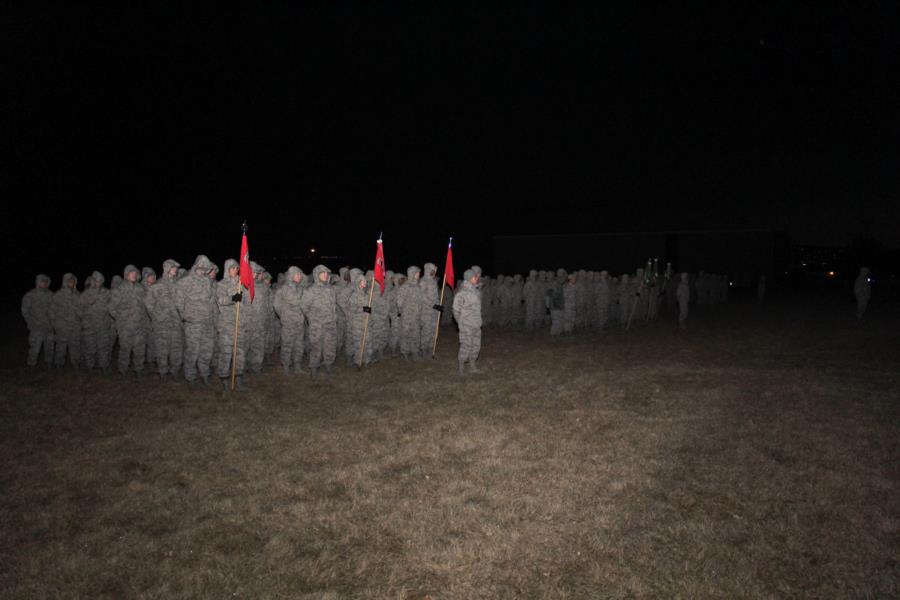 By coincidence, a flight of new B-l7Ds was due to arrive at Hickam that morning. The arrival of the bombers was not an everyday occurrence. The first trans-Pacific flight of bombers (from Hamilton Field, California to Hickam) had taken place only in May, when the first B-17s had arrived in Hawaii. Captain (later Lieutenant General) Gordon Blake, Hickam’s base operations officer, had been in his office in the operations building since 0700 preparing for the arrival of the new aircraft. As the Japanese dive-bombers began their attack at Hickam, Gordon's first thought was to get up to the control tower to get the incoming B-l7s down safely. Blake recalled, “We put some of them down at Bellows, and one of them on Kahuku Golf Course. I don’t remember where all of them landed, but we only lost one.” For his part in saving B-17 crew and aircraft, Captain Blake received a Silver Star.

“I saw a B-17 coming in to land with gear down and a Japanese fighter on his tail shooting at him. The B-17 was trying to outrun the fighter and was going too fast to land, so he pulled up and went around for another approach with the fighter staying on his tail firing a burst whenever he was in position to do so. The B-17 landed hot and as it was just braked to a stop a burst from the fighter set it afire just ahead of the vertical stabilizer. The crew ran from the plane as it burned in two and sagged in the middle.”

A handful of American pilots, despite being heavily outnumbered, flew against the Japanese from Oahu's airfields. Six planes from the 14th Pursuit Wing took off from Wheeler after the first attack. Another six, based at the small, undamaged, Haleiwa Field on the North Shore, scored several kills. They included Second Lieutenants Kenneth Taylor and George Welch, young P-40 fliers just out of pilot training. Three other pilots were shot down as they took off from Bellows Field by a wave of Japanese attackers.

“I kept hearing loud explosion after explosion! I could hear bombs, machine guns, and the whine of diving airplanes. . . I got in my car and went to the hospital, where they were very short of help. It was bedlam with hundreds of wounded arriving along with the dead—all these wounded for less than fifty beds! The severely wounded were sent to Tripler Hospital. The corpses got stacked in the halls. We all did what we could for the wounded. . . we lost all track of time.”

The Japanese suffered a small number of casualties from their attacks on Hickam, Wheeler, and Bellows Fields. These included the first prisoner of war captured by the United States, the commander of a Japanese midget submarine caught in the surf off of Bellows Field on the morning of 8 December. On the U.S. side, the losses of men and equipment were sobering. Casualties among the three fields included 163 men killed, 43 missing, and 336 wounded, of which 121 killed, 37 missing, and 274 wounded were at Hickam. Of the 231 planes of the Hawaiian Air Force, only 79 remained usable.

Soon after the 7 December attack, Hickam transformed into a hub for U.S. forces moving into the Pacific while at the same time preparing to meet further attacks. Airmen swiftly camouflaged the base, established blackout procedures, and placed dummy planes all over Oahu. They also deployed large numbers of new fighter aircraft rushed from the mainland and assembled at night, as well as repairing and overhauling B-l7s returning from duty in Australia.

Hickam's own 18th Bombardment Wing served in combat soon after the repair of its aircraft. Its two groups, the 5th Bombardment Group (Heavy) (BG), and the 11th Bombardment Group (Heavy) participated in the Battle of Midway, flew out of Guadalcanal’s famous Henderson Field in support of the U.S. Marines in the Solomon Islands, and ended their wartime missions at Okinawa. Between 1942–45, several other bombardment groups, such as the 30 BG, the “Atoll Busters,” operated from Hickam before moving to one of the forward airfields ringing the shrinking Japanese Empire.

Hickam’s role as a maintenance and deployment center grew enormously until the end of the war. In addition to overhauling B-l7s, the base modified B-24 Liberator bombers and the twin-engine B-26 Marauder bomber. Temporary buildings sprouted all over the base, and even so, supplies, ammunition, and even sensitive electronic equipment was stored in the open air because of the lack of storage space.

Hickam also served to transport such supplies, and troops, to and from every battlefield in the Pacific. The Air Transport Command South Pacific Wing Headquarters at Hickam Field flew hundreds of cargo aircraft, such as the C-39 (the first cargo transport at Hickam), C-46 Commando, C-47 Skytrain (nicknamed the "Gooney Bird"), and C-54 Skymaster. General Dwight Eisenhower credited the C-47 (along with the jeep, the bazooka, and the atomic bomb) as one key to winning World War II.

The C-47s not only delivered personnel and equipment but also took on a new mission, that of aeromedical evacuation. By 1945, aeromedical planes were evacuating the sick and wounded at a rate of almost 100,000 per month. Many C-47s arrived at Hickam carrying patients on their way to the Army's Tripler General Hospital, located just a few miles away.

Not surprisingly, later in the war Hickam developed into a temporary command hub for U.S. Army Air forces in the theater. The organizers of the Twentieth Air Force's B-29 bombing campaign against the Japanese home islands planned their strategy from Hickam, which underwent a new wave of construction to accommodate headquarters units and B-29 support units. As units organized for service on Guam, Tinian, or Saipan, they often deployed first to Hickam, then to their forward bases." 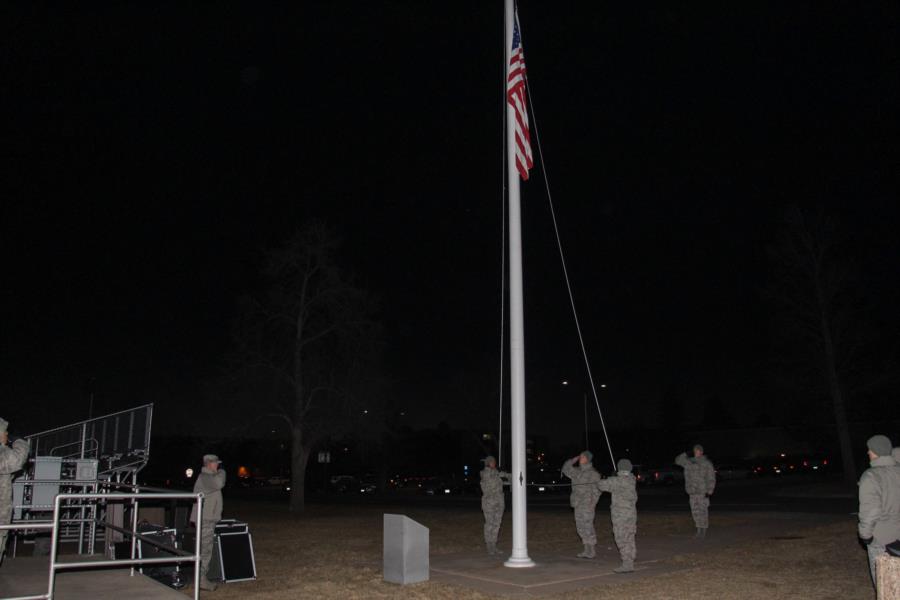 To view the rest of our glimpse into their Memorial ceremony go to; Classes - Prep School - Military Training. Or click the link below.