**Just about all of the pictures from Sunday's TX Events are currently uploading into the TX Gallery! We will be uploading the Night Evasion event with Monday's coverage after we edit the rest of TX! Click the link below to get to the first page of Sunday's coverage! Thank you again for your patience in our getting the pictures up!**

Hey Prep Families! Today was Day 3 of Prep TX, by this time tomorrow your C/C's will have completed TX and will be getting ready for Graduation! Today the C/C's had the Amazing Race, a Talent Show and a Night Evasion event.

The morning was lowkey for the C/C's, they had time to relax and take some "me" time.

This afternoon was the big event of the day - the Amazing Race.

This race consisted of a series of 12 different stations that each team had to complete in whatever order they wanted to.

Every team received a team packet where they found a signature card that needed to be signed complete or incomplete by the staff member after each event, a map of location of events, and a description page of each event. Once the packets were distributed, every group then had 5 minutes to choose their team captain and discuss a strategy before starting the competition. Once the team captain and the strategy was figured out the staff started the clock and the C/C's were off!

Because this event was so spread out we sadly weren't able to catch every station but below are highlights and descriptions of the stations we did make it to!

Trivia Pursuit
Each team had to travel down the Stairway and back up to begin. Once they got back up to the top they were asked a series of Air Force Athletic trivia questions and began with a total of 500 push-ups. How did they begin with 500 push-ups? Well that's the catch - each question equalled 100 push-ups. So if they got a question right, they could subtract 100 push-ups from their total and if they got all 5 correct than they didn't have to do any push-ups. They were only allowed one answer for each question. Some teams got all the questions right, some teams had to a lot of push-ups. 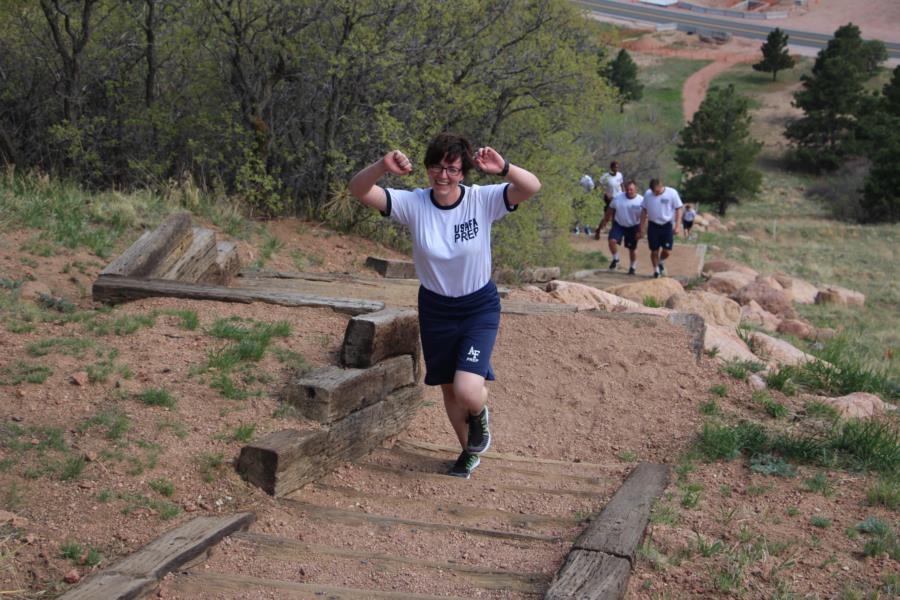 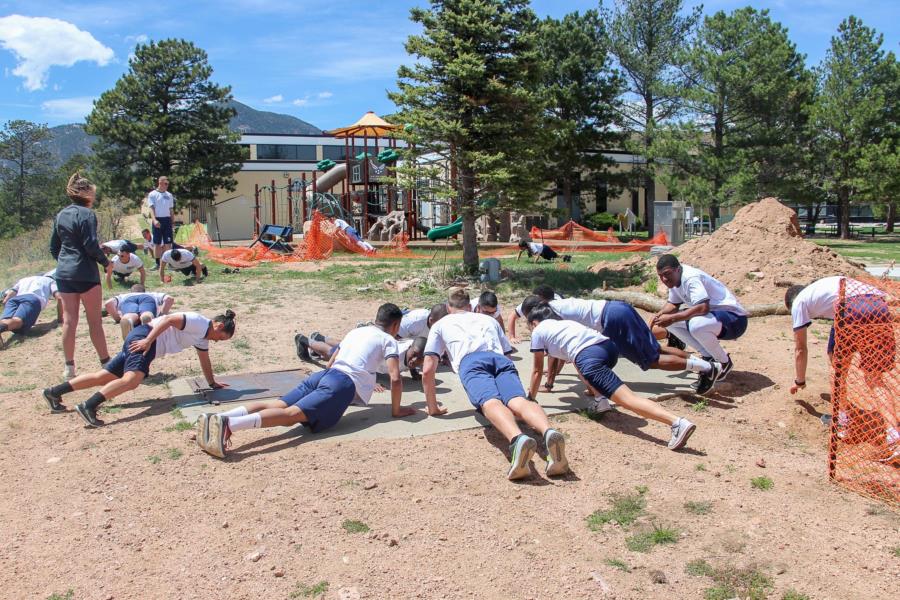 Cutball
Each team had to push the “cut-ball” up the Hill a total of 5 times.  At the completion of the 5th rep, they were asked to come up with a joke (long or short.. group’s choice) that creates laughter from the instructor and if they didn't make the instructor laugh then a penalty of a 6th rep occurred. 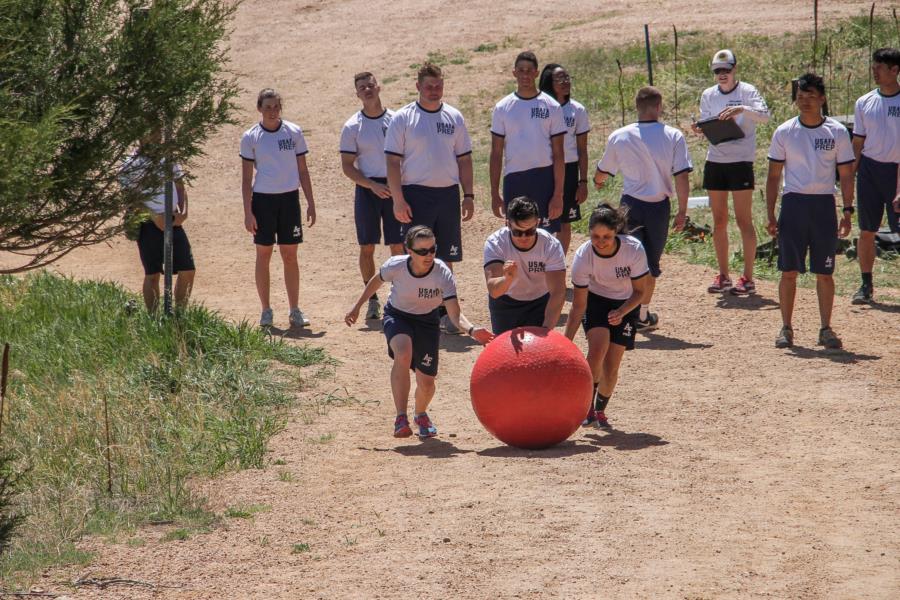 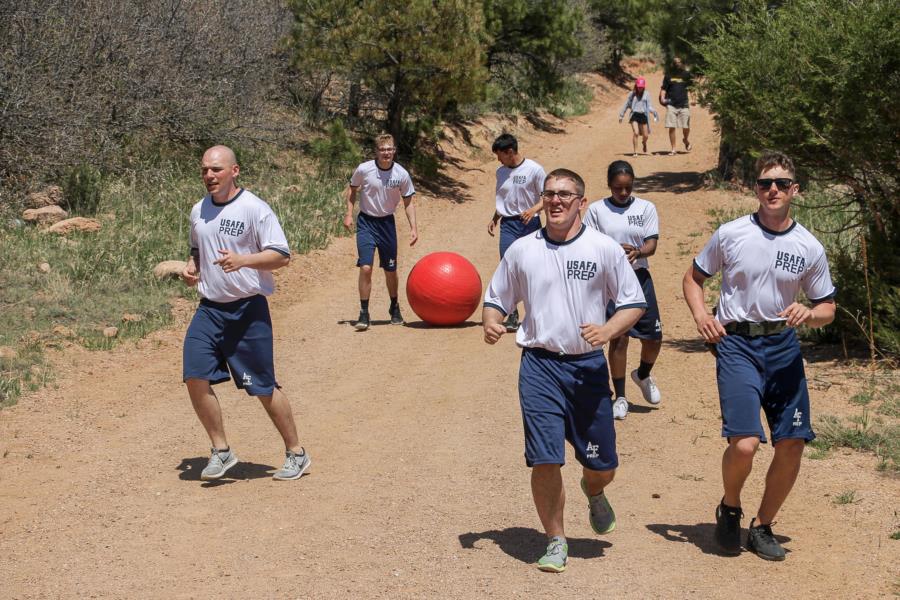 I AM
Each team was asked a series of questions, for every question answered correctly they only needed to do 120 pull-ups and for every question answered incorrectly it was a total of 150 pull-ups. They were allowed to use up to 3 pull-up bars at the same time and each of the groups participants could go as many times as they wanted after everyone attempted it at least once. 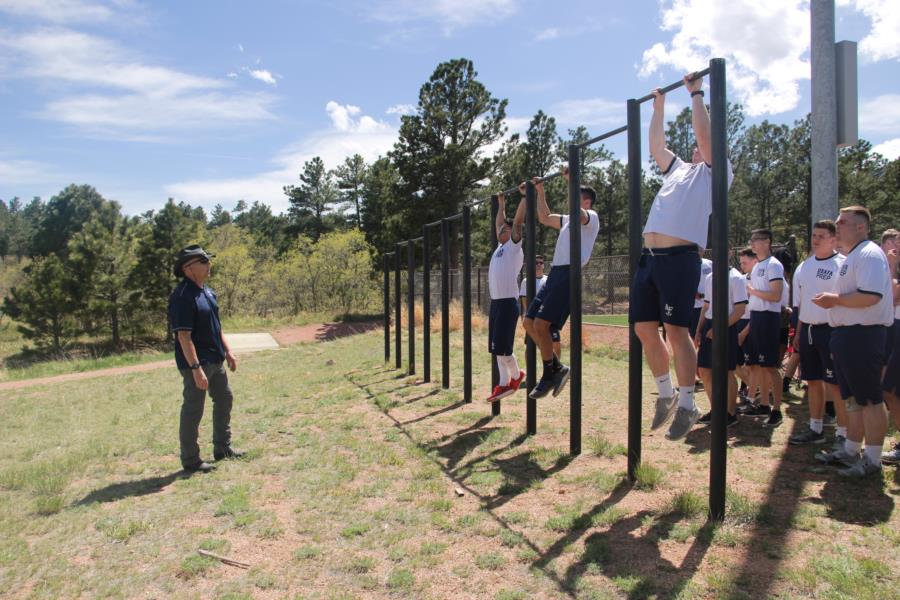 Volleyball Challenge
Each team started with several volleyballs, and 10 targets set up at various spots on the other side of the covered net - the C/C's could not see through it to the other side.  The team starts out the station with owing 100 flutter kicks per person.  They were allowed to send one person across the net to sit on a target of their choice which would become the team’s current target. The rest of the team then had to serve balls cover the covered net until the person seated across caught one without dropping it.  Once this happened, the “target is achieved."  Each target achieved subtracts 10 flutter kicks from the 100 owed. With The event was complete and time stopped when either all 10 targets were achieved, or all flutter kicks were completed as a group. 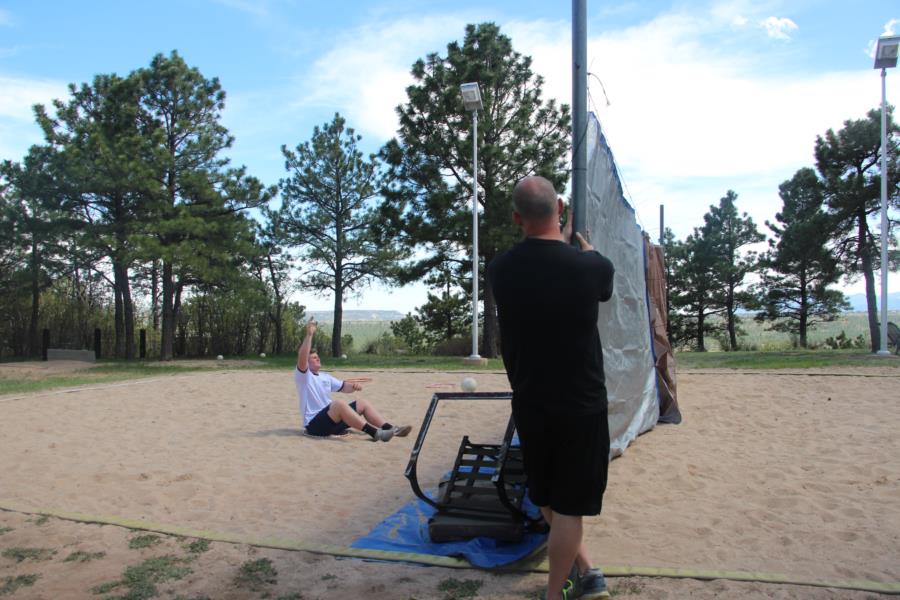 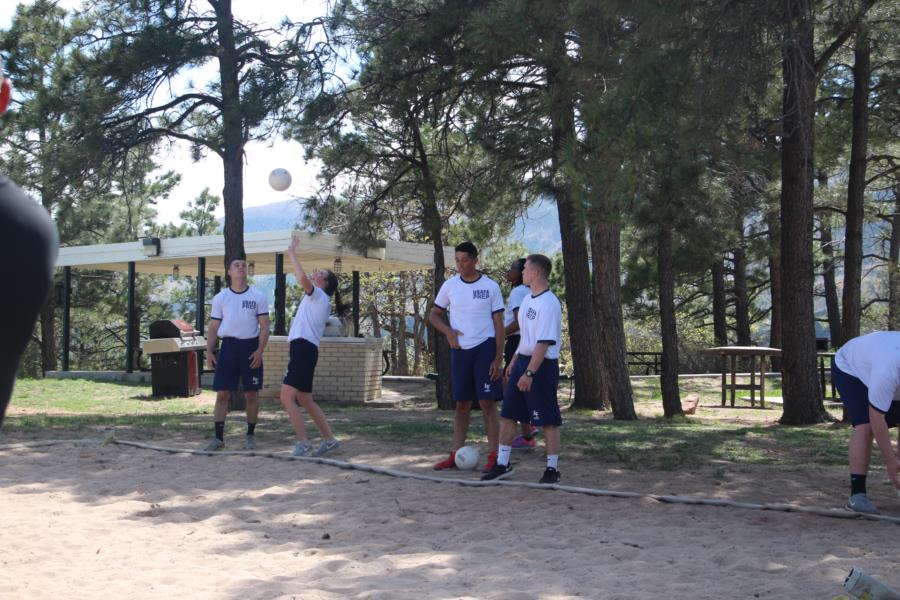 Water Balloon Toss
Each team had to spread out across the softball field on specific points and toss a water balloon to each other without popping it. If it popped they would have to start over. Once every team member either threw or caught the water balloon the event was complete but if a member breaks the balloon then the entire team will complete punishment before restarting. The punishments were; 1st break: 300 push-ups at 30 per member, 2nd break: 300 sit-ups at 30 per member, 3rd break: 300 squats at 30 per member, 4th break: a lap around the field to discuss event approach. If they broke all 4 balloons they failed the station. 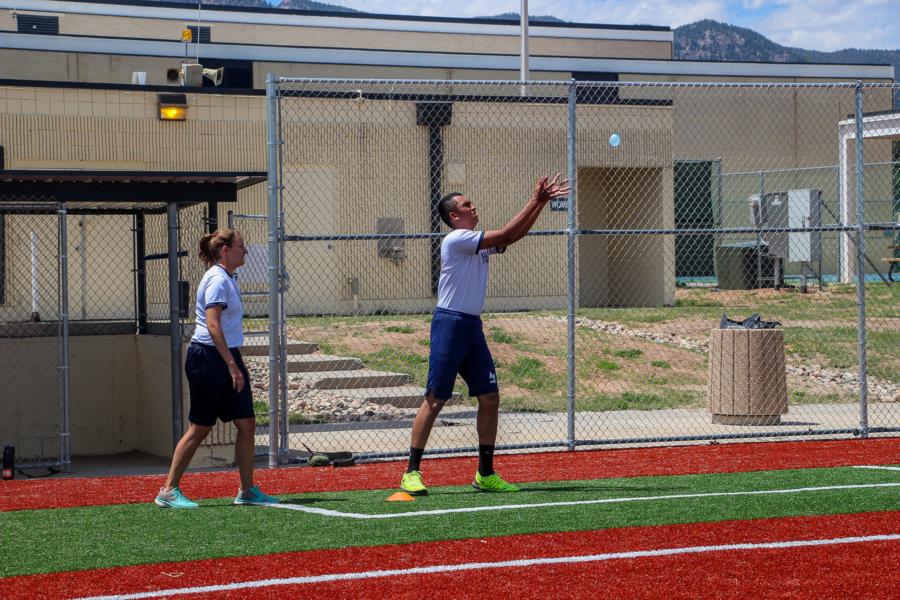 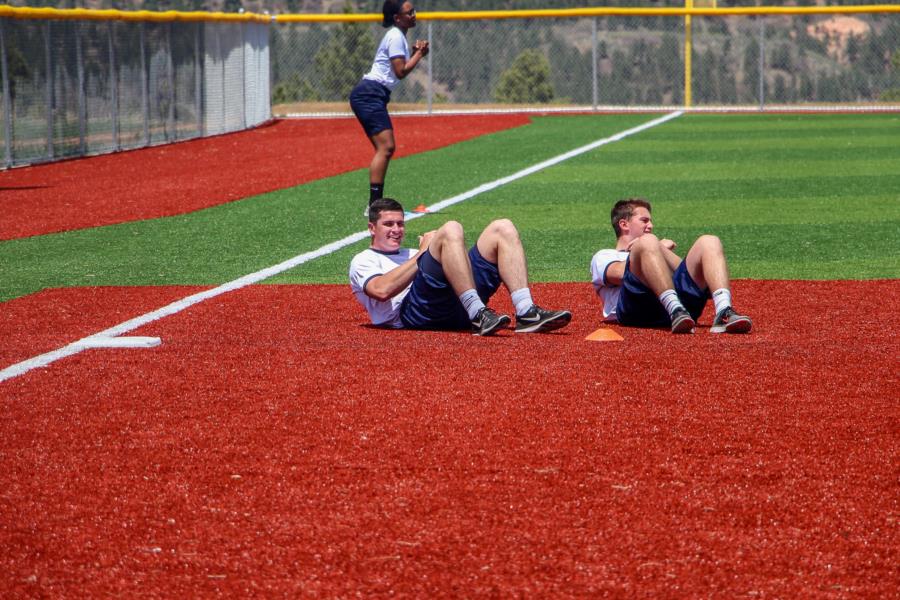 Sponge In A Bucket
Each team had to take a sponge, soak it in water in the "dunking area" and then sprint 50 yards across the football field to another bucket. Once at the bucket the team member then had to squeeze the sponge filling the bucket as much as possible. After squeezing as much water as they could out of the sponge they then ran back to the dunking area and passed the sponge to the next team member. This was repeated with every team member until the bucket of water reached the task completion level. 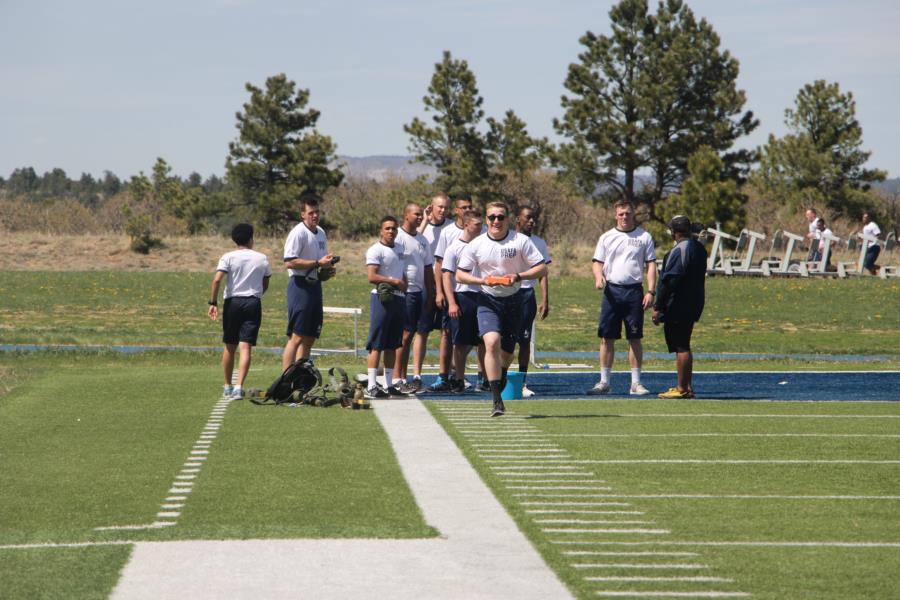 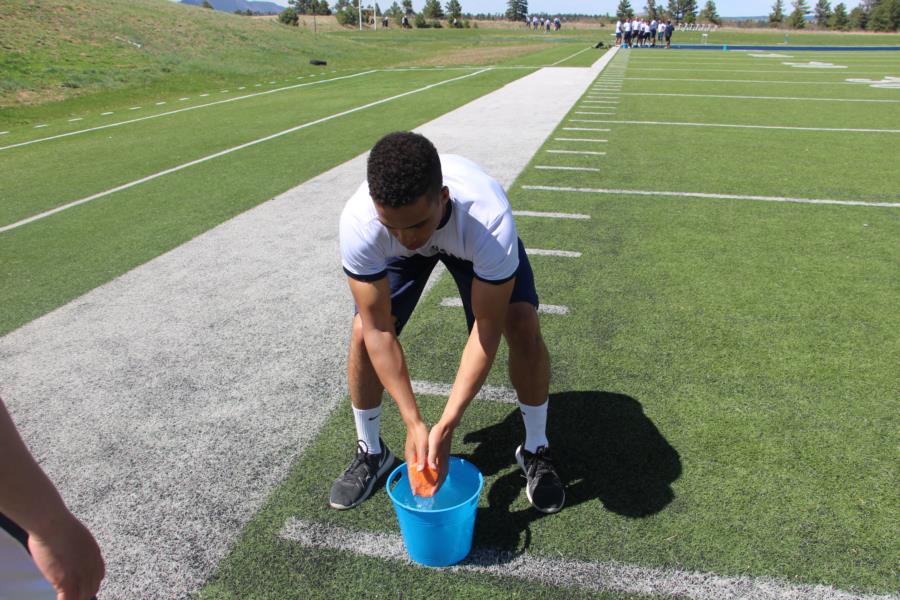 Football Throw
Each team had to "Bear Crawl" on all fours across a pre-measured distance to the "finish line." Once at the finish line, each team member would attempt to throw a football through a tire suspended from the goal post. Each member were given 3 attempts to throw the ball through the tire, if they did not succeed within those 3 attempts they had to run back to the starting point and bear crawl with another member of their team to the finish line again. Once everyone successfully threw the ball through the tire, the task was complete. 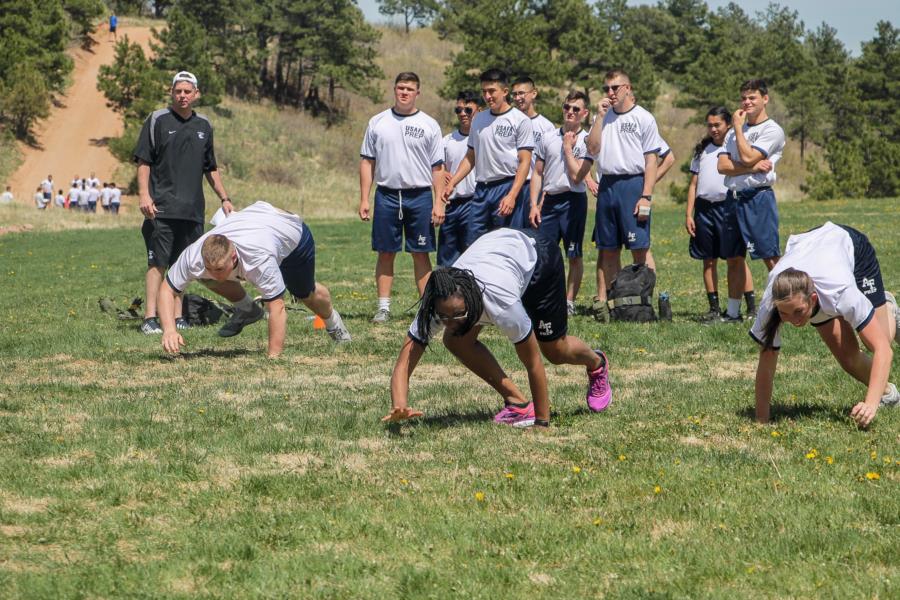 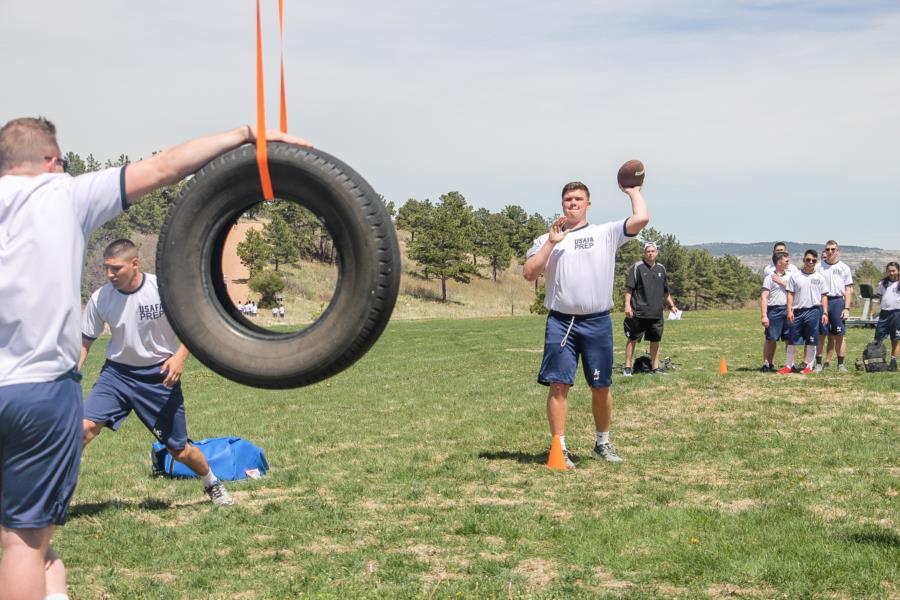 Bowl-A-Thon
Each team had to nominate 3 of their members as the bowlers and another member as the spokesperson. They then had to bowl for a strike, spare or 8 pins. Once a member bowled, they were asked a trivia question. If the answer is correct then they have completed the task but if incorrect they must bowl again until they answer correctly. 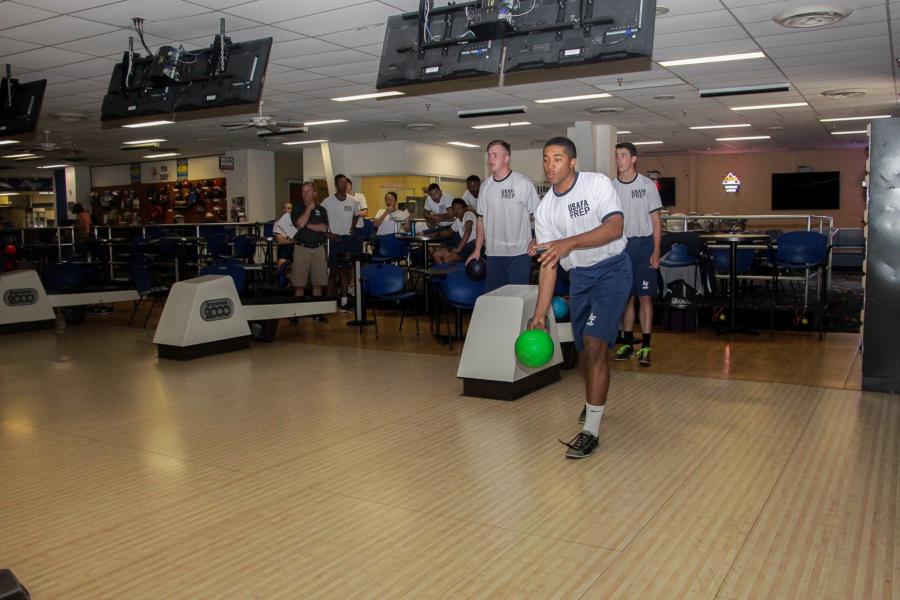 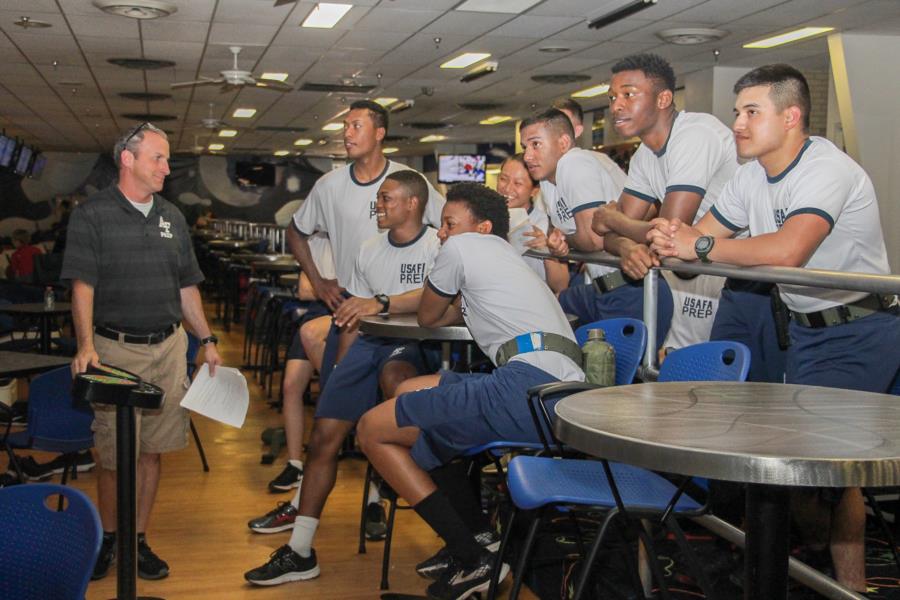 Bear Pong
Each team needed to make 3 balls into the barrels from 15-20 feet away. If they missed then that person had to completed an exercise given by the instructor. If the shot into the barrel is made, then that bucket would get taken away. To complete the task they had to make all three before time was up. 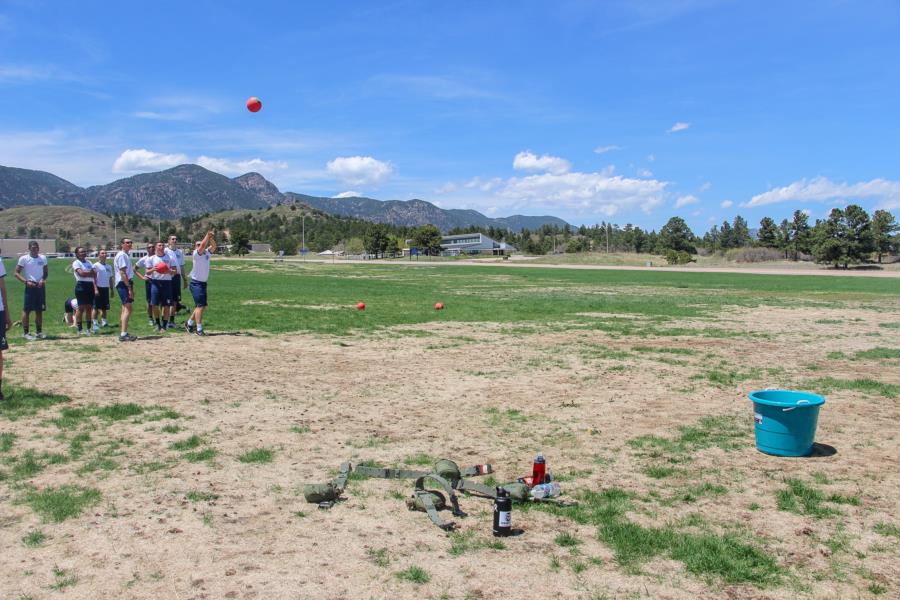 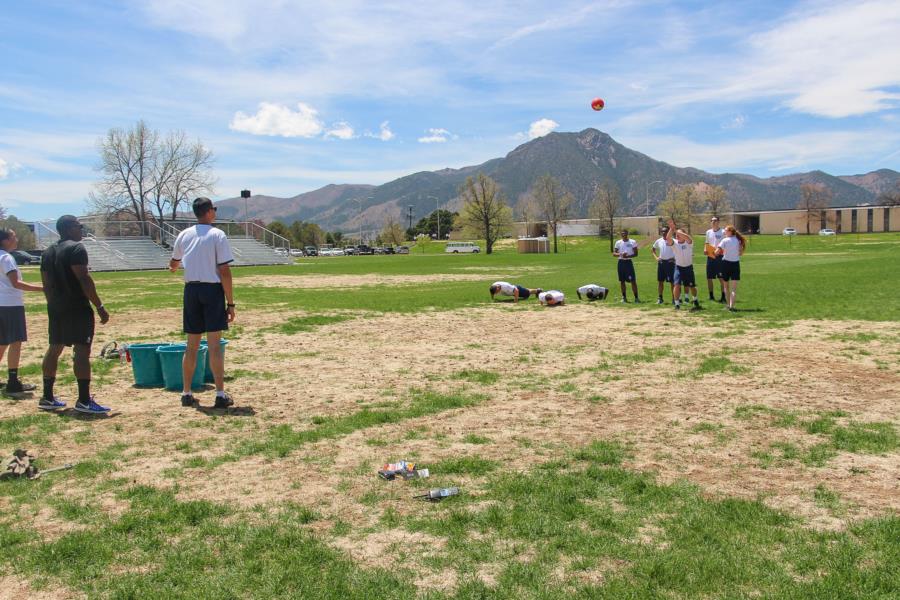 After dinner, it was time for the Talent Show. Some of the Prep Staff and several C/C's performed - there was singing, a skit, and some instrument playing too! 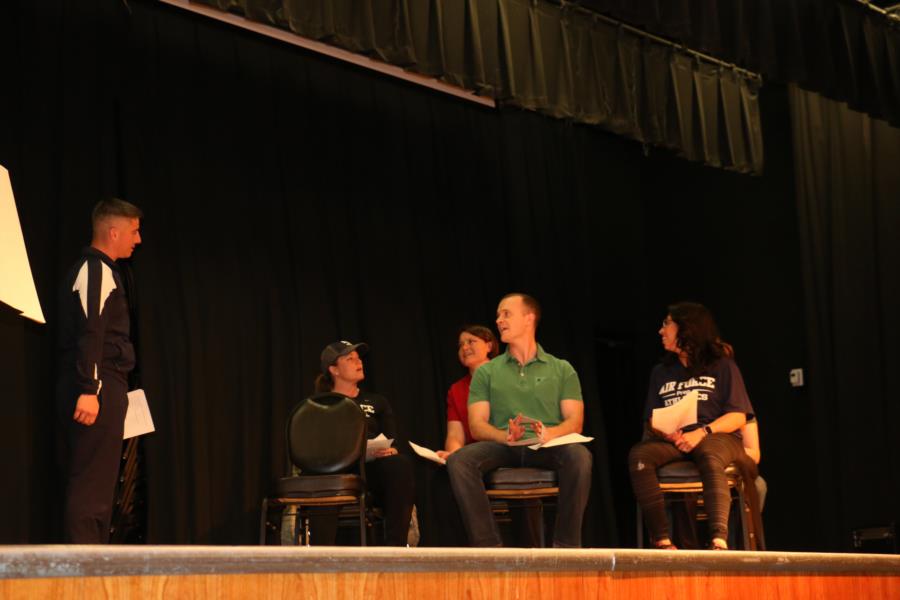 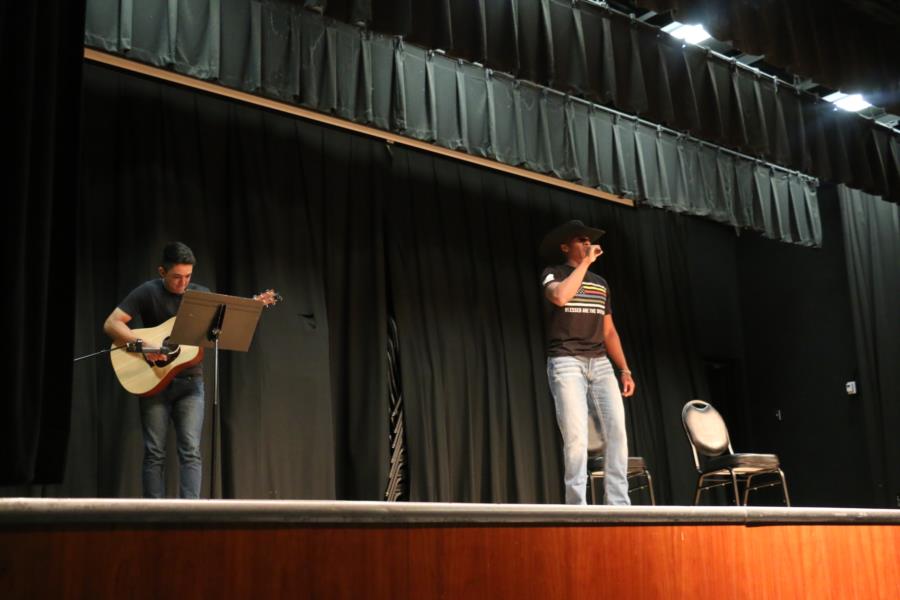 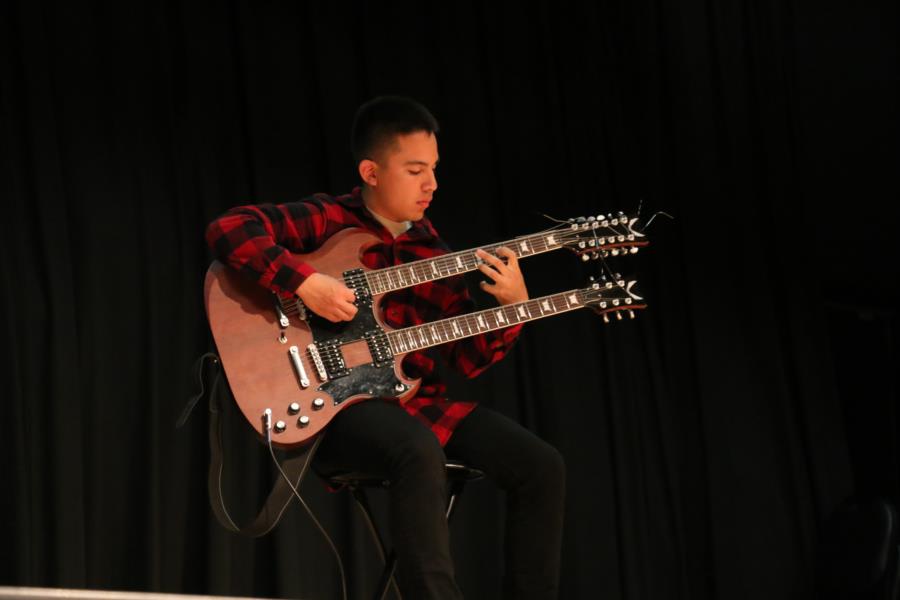 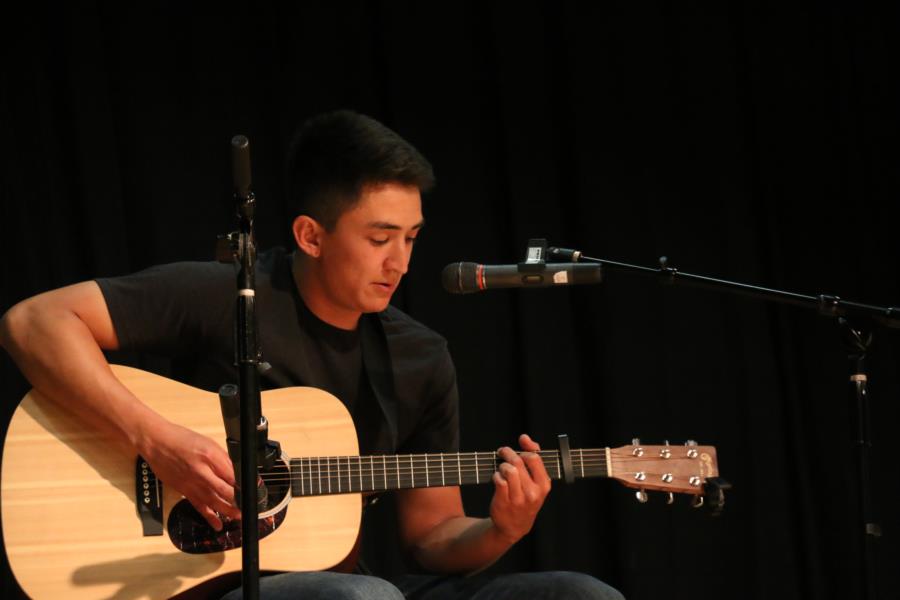 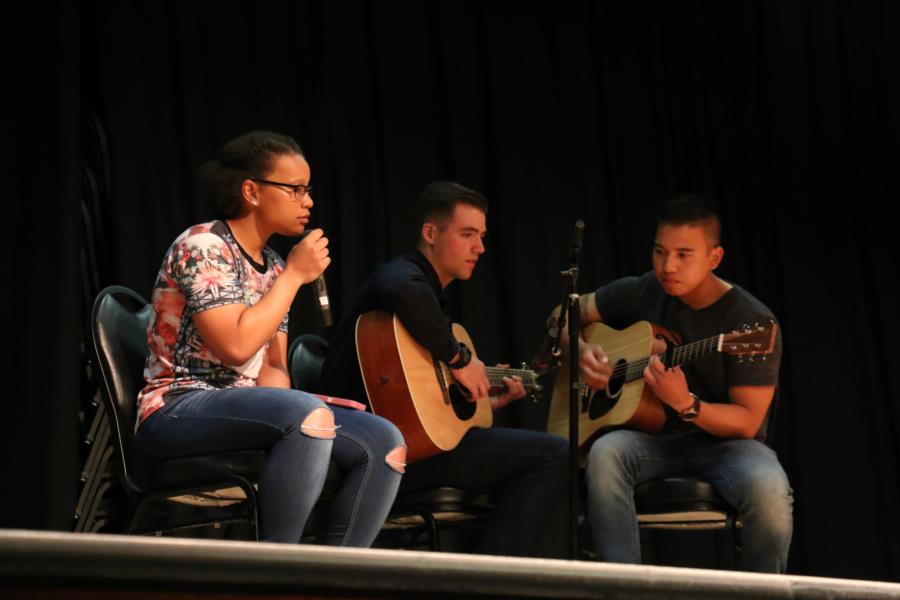 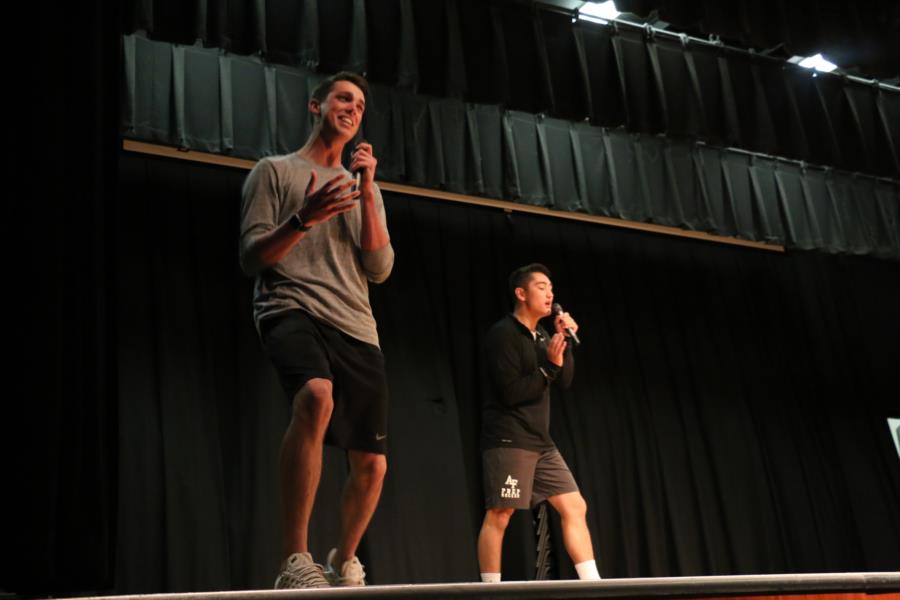 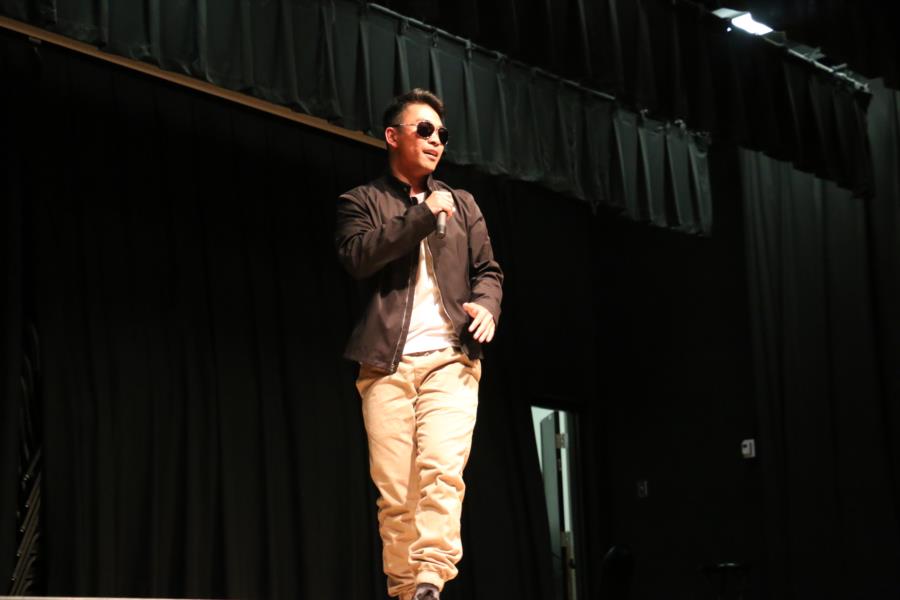 After the talent show, the C/C's had to get ready for tonight's Night Evasion event, we had a photographer out getting pictures but with the event going past the sun setting we were only able to catch the beginning of the event. You'll have to ask your C/C's what they had to do during it! We'll have highlights from the portion we were able to catch tomorrow, after TX is complete!

If you haven't seen our update about pictures from Friday's coverage of Prep TX, be sure to check out the Prep School Gallery under Prep TX because we uploaded that earlier today! We are hoping to get the rest of the pictures up over the course of the next few days. All of our editors/photographers will be out again tomorrow with the C/C's from sun-up to sun-down as they go through all of the events so be sure to check back in the evening tomorrow for an update of the days activities!