On Tuesday this week the C/C's had the opportunity to hear from an Astronaut Panel; Lt. Gen. Susan J. Helms and Col. (Ret) Gary Payton. 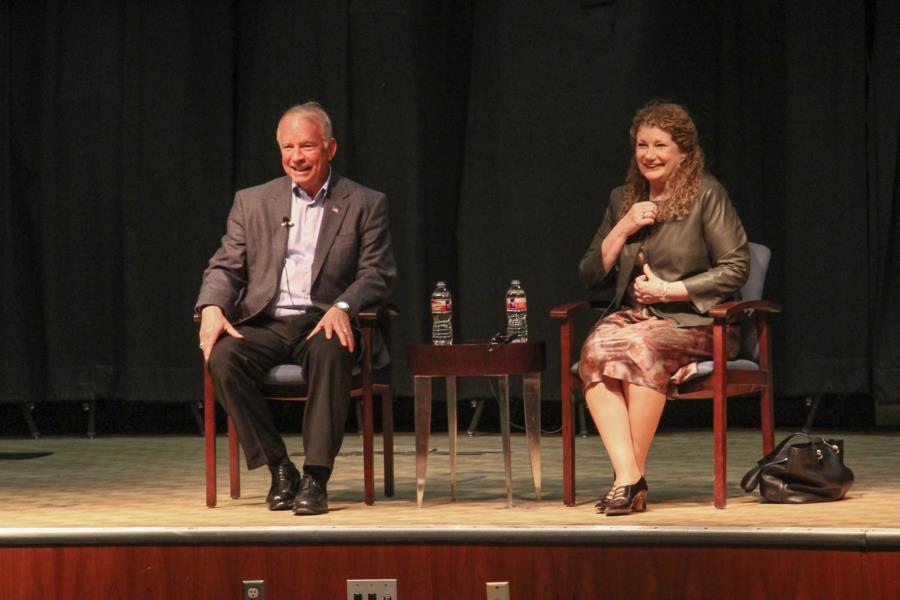 Below is some background on both visitors; 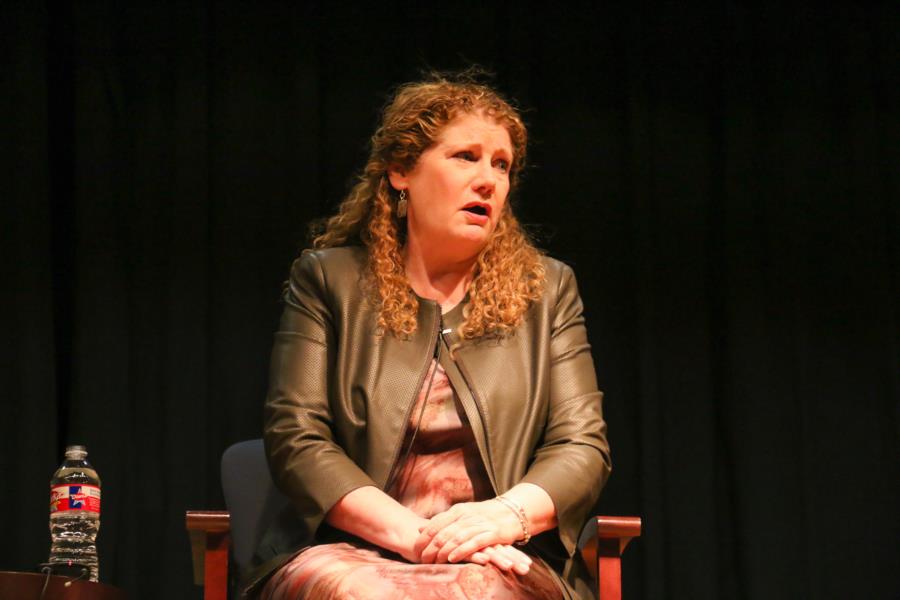 Lt. Gen. Susan J. Helms is Commander, 14th Air Force (Air Forces Strategic), Air Force Space Command; and Commander, Joint Functional Component Command for Space, U.S. Strategic Command, Vandenberg Air Force Base, Calif. As the U.S. Air Force's operational space component to USSTRATCOM, General Helms leads more than 20,500 personnel responsible for providing missile warning, space superiority, space situational awareness, satellite operations, space launch and range operations. As Commander, JFCC SPACE, she directs all assigned and attached USSTRATCOM space forces providing tailored, responsive, local and global space effects in support of national, USSTRATCOM and combatant commander objectives. General Helms was commissioned from the U.S. Air Force Academy in 1980. She has served as an F-15 and F-16 weapons separation engineer and a flight test engineer. As a flight test engineer, General Helms has flown in 30 types of U.S. and Canadian military aircraft. She has also served as project officer on the CF-18 aircraft as a U.S. Air Force Exchange Officer to the Canadian Aerospace Engineering Test Establishment. Selected by NASA in January 1990, General Helms became an astronaut in July 1991. On Jan. 13, 1993, then an Air Force major and a member of the space shuttle Endeavour crew, she became the first U.S. military woman in space. She flew on STS-54 (1993), STS-64 (1994), STS-78 (1996) and STS-101 (2000), and served aboard the International Space Station as a member of the Expedition-2 crew (2001). A veteran of five space flights, General Helms has logged 211 days in space, including a spacewalk of eight hours and 56 minutes, a world record. General Helms commanded the 45th Space Wing at Patrick AFB, Fla. Her staff assignments include tours at Headquarters Air Force Space Command, Air Education and Training Command, and U.S. Strategic Command. 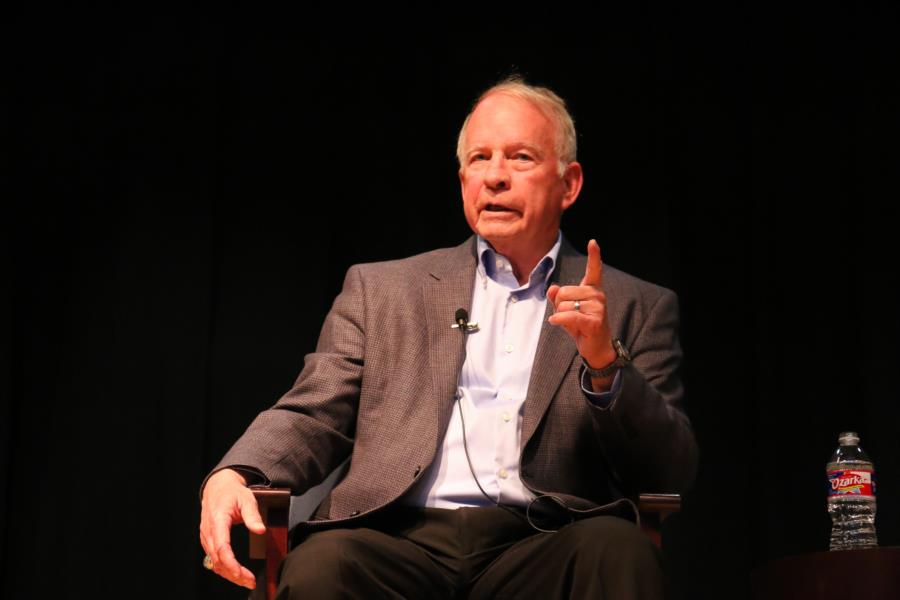 Professor Gary Payton serves as a Distinguished Visiting Professor in the Schriever Chair in Astronautics at the U.S. Air Force Academy. He teaches in the Department of Astronautics. Prior to becoming the Schriever Chair, he was the Deputy Undersecretary of the Air Force for Space Programs, Washington, D.C. He provided guidance, direction and oversight for all Air Force space and space related acquisition plans, and strategies for research, development, test, evaluation and space-related industrial base issues. Prof. Payton earned his Bachelor of Science degree in astronautics from the U.S. Air Force Academy in 1971 and his Master of Science degree in aeronautical and Astronautical engineering from Purdue University in 1972. As an Air Force officer, he served as a pilot, instructor pilot, spacecraft operations director and space technology manager. In 1985, he flew as a payload specialist on STS-51C Discovery (January 24-27, 1985) which launched from and returned to land at the Kennedy Space Center. STS-51C was the first dedicated Space Shuttle mission for the Department of Defense. After his flight on Discovery, he served in the Pentagon in a series of increasingly more responsible positions in the Air Force and the Office of the Secretary of Defense. He retired from the Air Force with the rank of Colonel after more than 23 years of service.  Mr. Payton has also served as NASA's Deputy Associate Administrator for Space Transportation Technology where he initiated, planned and led the Reusable Launch Vehicle technology demonstration program, which included the X-33, X-34, X-37 and DC-XA flight test projects. His responsibilities included program formulation, budget preparation and program advocacy with Congress, the White House, the Department of Defense and the media. For two years he was the Senior Vice President of Engineering and Operations for ORBIMAGE, a leading global provider of Earth imagery products and services. Additionally, he served as the Deputy for Advanced Systems in the Missile Defense Agency. There he led the MDA technology program to enhance ballistic missile defense sensor, weapon and battle management capabilities.

They each talked about their careers as Astronauts and leading up to them becoming Astronauts.

Lt. Col. Susan J. Helms was the first woman in space, and also is one of two people with the world record in space walk which occured during her last mission.

Col. (Ret) Gary Payton's shuttle flight was one of the first of NASA's Military Flights and was also one of the first to have an Air Force and a Military career in space. He has traveled over 1.2 million miles in 48 Earth orbits, and logged more than 73 hours in space.

When it came time for questions, one of the C/C's asked;

What it was like to see earth for the first time?

Payton: During a launch everything is working like mad. But when they were in between Hawaii and California flying upside down they were able to open the doors to the most gorgeous deep blue ocean. He said it literally takes your breath away.

Helms: The first time she flew in space she was downstairs and not near windows because her job was to start getting the bottom part of the ship ready. She was the only rookie on this mission. When she got up to into the flight deck to see earth she said it was absolutely stunning. Helms had the chance to help film an IMAX movie called "Space Station." Helms said the weather is absolutely dominant from the outside rather than the green you see on land. Astronauts are always challenged getting certain shots of land because of weather.

What is your concept of time, in space?

Payton: In the space shuttle your first day in orbit is a long one. Payon said he discovered he was a morning person because he noticed that the darkness made him tired, and he worked better in light. On the shuttle you have a tight schedule - the crew timeline has segments 2 minutes wide which are fully scheduled the entire time in space. "You lose your track of time, he said, "because of working inside. When sleep came it was hard to do, because they were behind on work or because of the sunrise." There is a lot of adapting you have to go through.

Helms: When you are in orbit, you travel around the earth in 90 minutes. You have 45 minutes of darkness and 45 daytime back to back and can see sunrise/sunset 16 times a day. The Space Station was more of a marathon than a sprint like the Space Shuttle atmosphere. She had daily tasks instead of back to back tasks and usually Sunday there was no list of tasks because they would get the day off. Pace of life was extremely comfortable and not tightly scheduled.

After the Q&A segment of their visit two of the C/C's presented Lt. Gen. Susan J. Helms and Col. (Ret) Gary Payton with gifts on behalf of the Prep School. 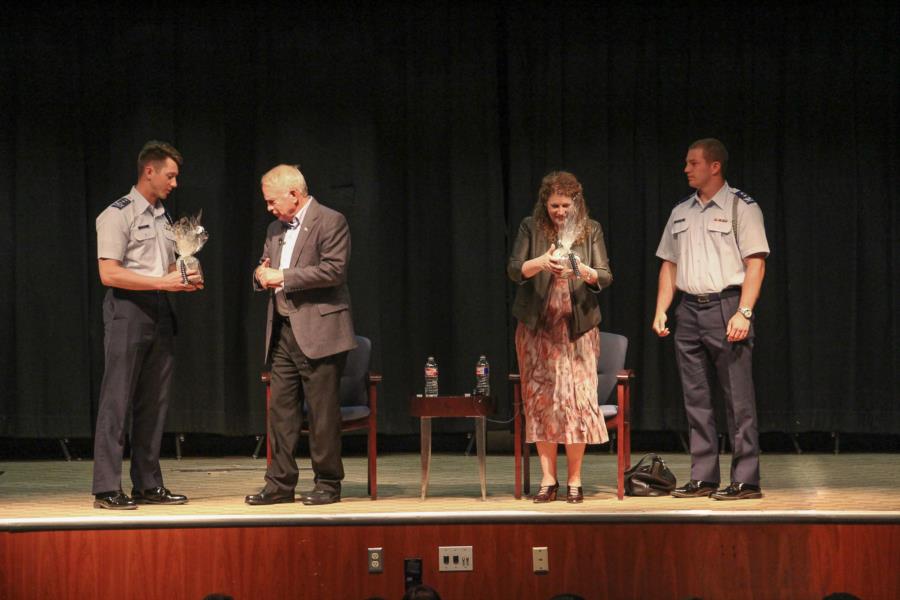 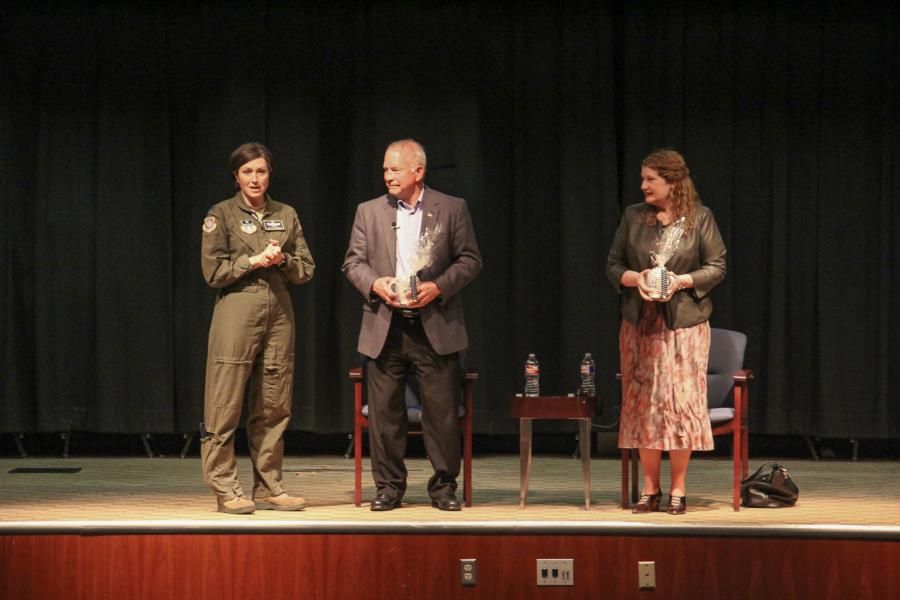 Afterwards the C/C's were able to have one on one conversations and even picture opportunities with Lt. Gen. Susan J. Helms and Col. (Ret) Gary Payton. 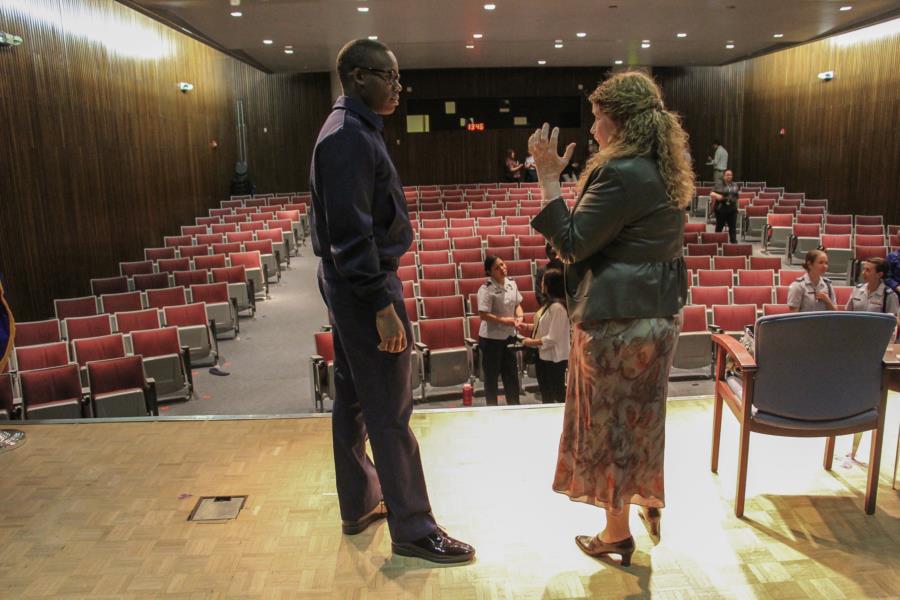 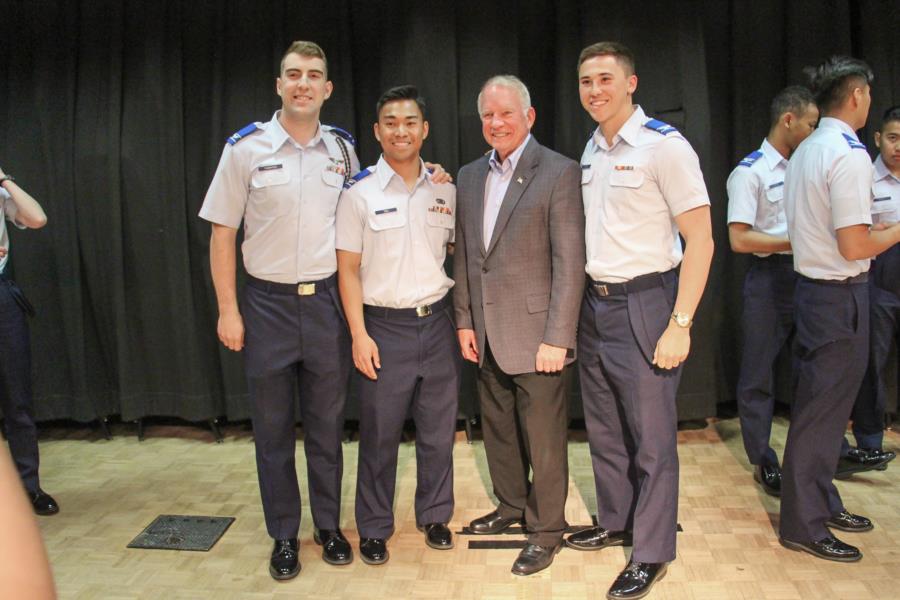 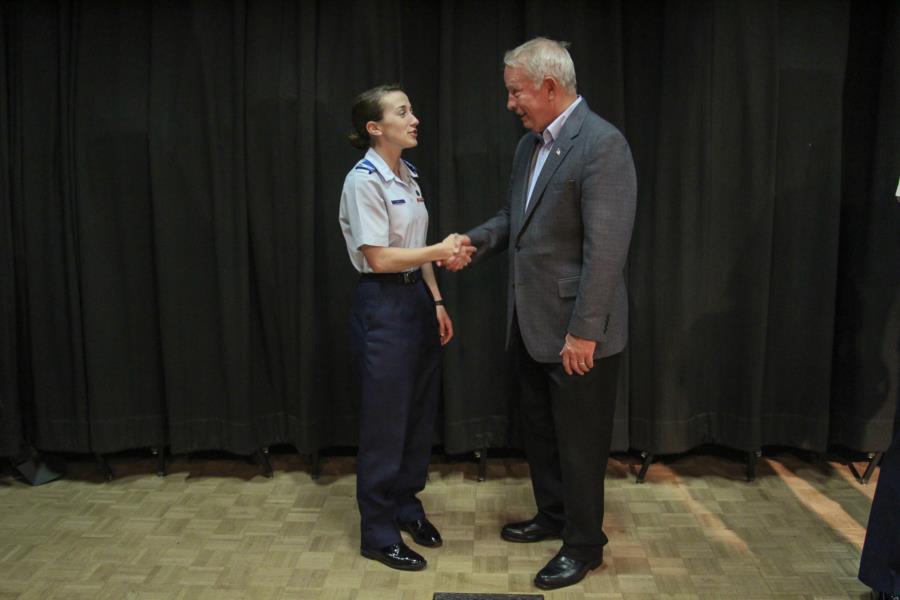 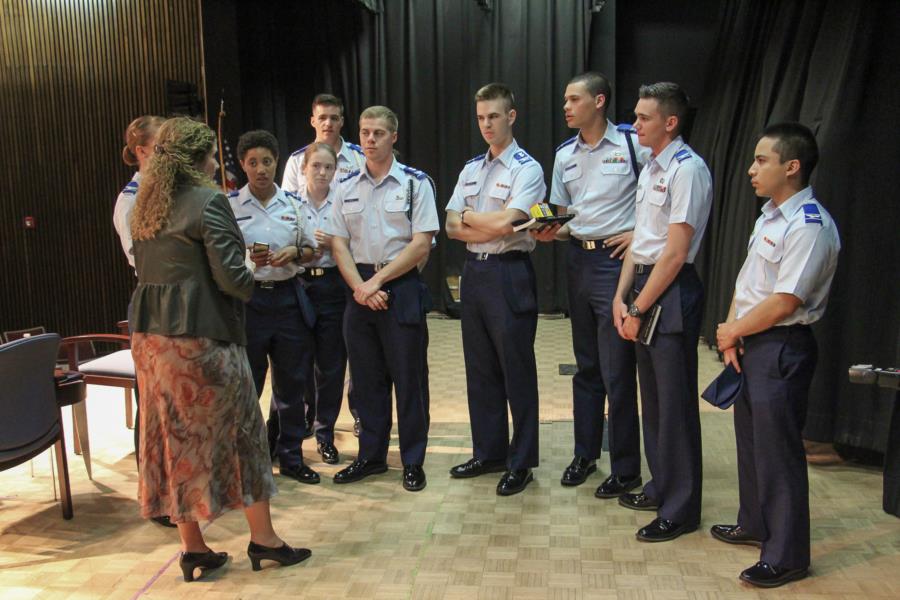 To view the rest of our glimpse into the Astronaut Panel go to; Classes - Prep School - Prep Life. Or click the link below.