The academic year is coming to a close and with that, Intramurals. Earlier today we attended the Intramural Banquet, celebrating and recognizing Cadets and Squadrons who participated in this year's Intramurals.

Sadly, we were not able to make it to the last Intramural Championship of the season. We want to give a huge shout out and thank you to the Athletic Department who shared pictures of the two winning Squadrons with us, you can also find these pictures in our Public Gallery! The winning Squadron of the 2nd Go for Volleyball was Squadron 32 and for Softball was Squadron 35. Congratulations to both teams! 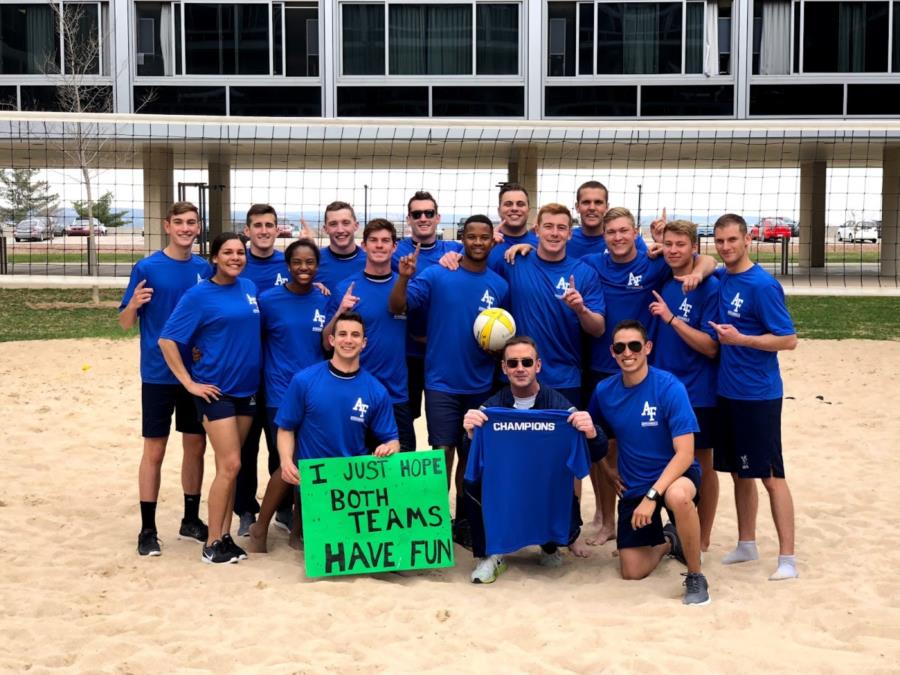 The MC for the Intramural Banquet was Capt Brian Corcoran, the Director of Intramurals. 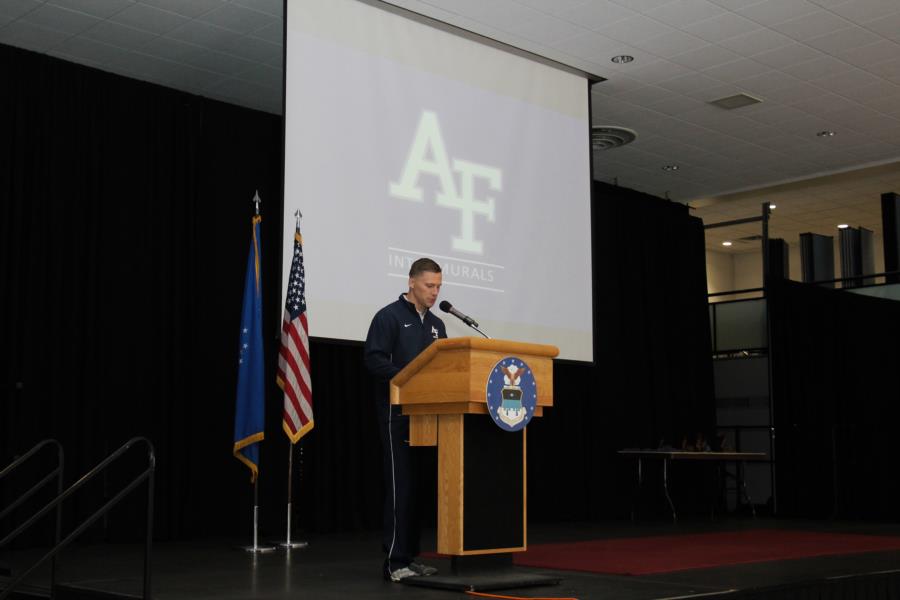 Chaplain Deluise provided the invocation for the Luncheon and the host Col Jarvis Baker, the Vice Director of Athletics gave a few opening comments. 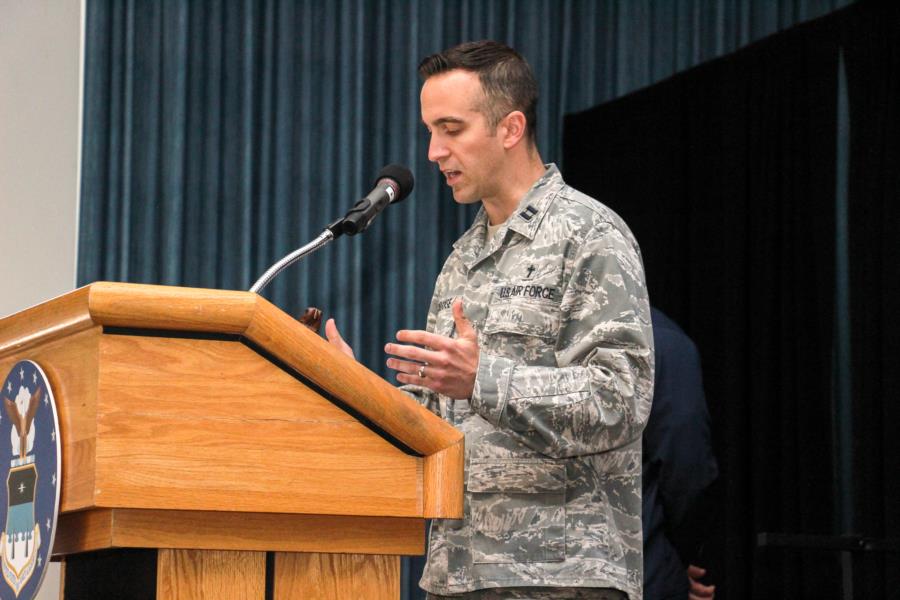 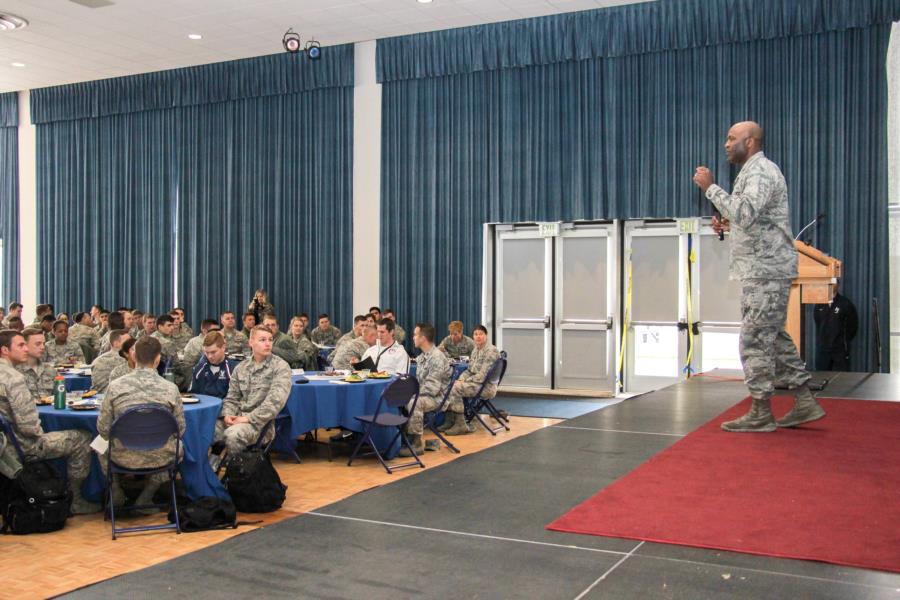 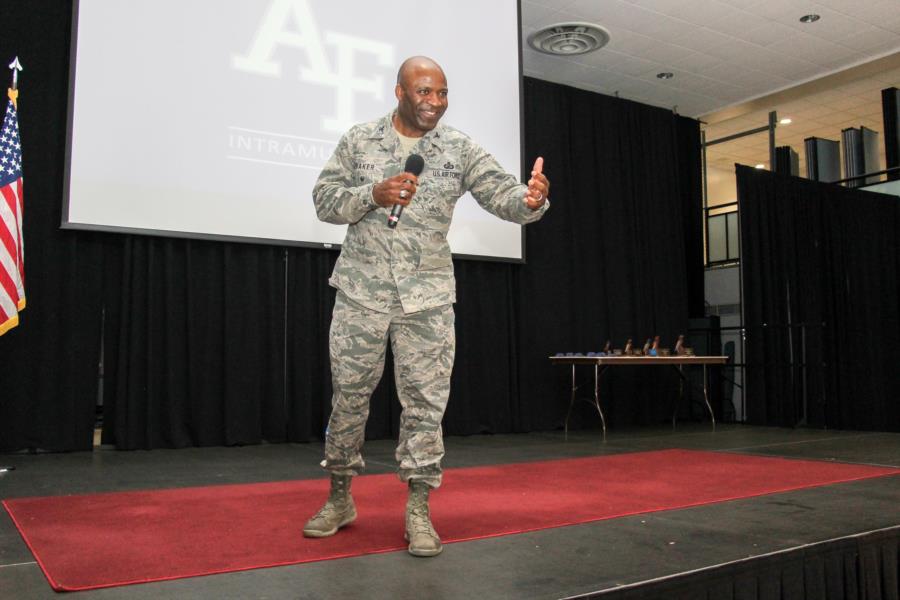 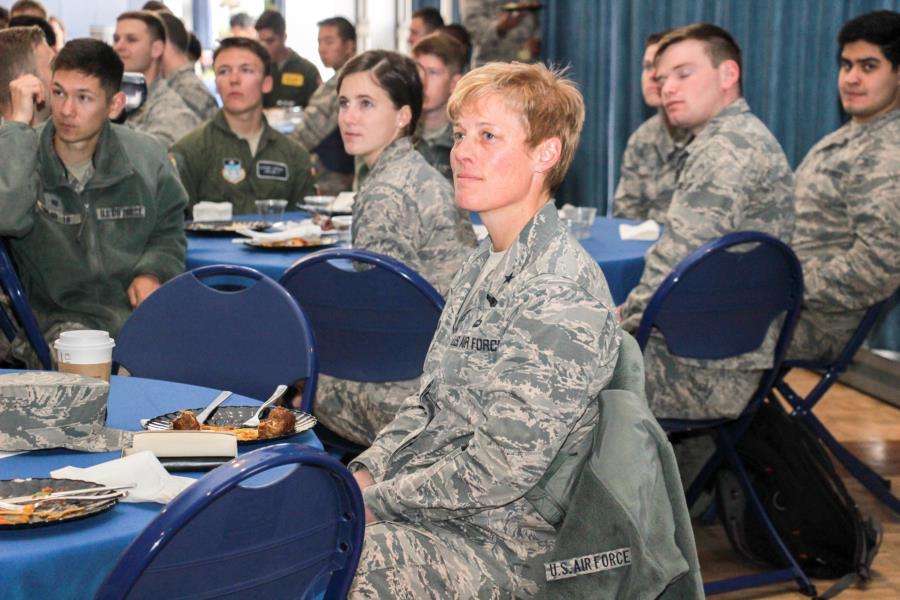 The Guest Speaker was Sergeant 1st Class Nate Weber. Sgt 1st Class Weber is a Colorado native from Thornton, Colorado. He joined the U.S. Army in 2005, serving with the Special Forces in multiple combat deployments to Niger, Cameroon and Afghanistan as a Green Beret. He also is a member of the United States bobsled team. In 2012, he started training as a bobsled pusher, in Lake Placid, New York, motivated by the American bobsledder Justin Olsen. He then went on to compete in the four-man event at the 2018 Winter Olympics. 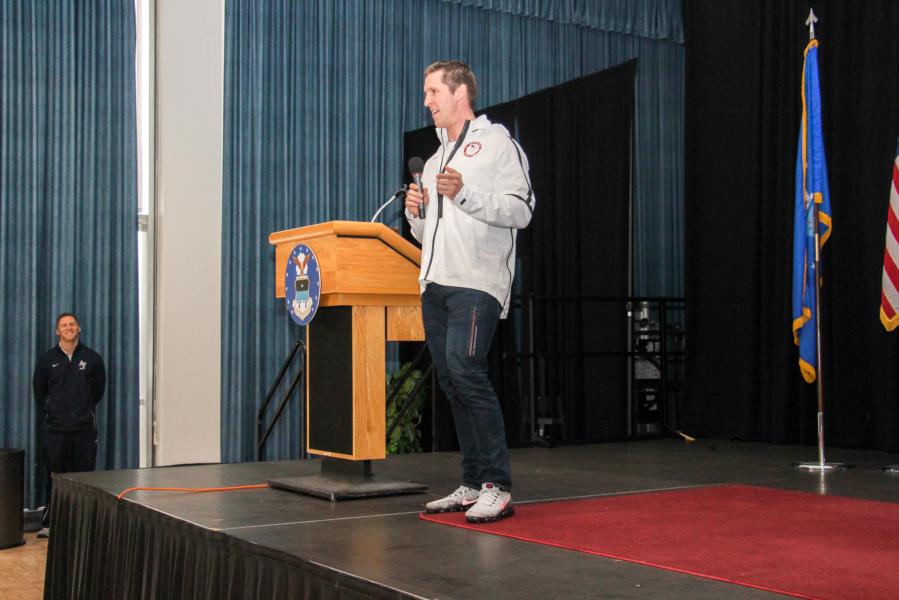 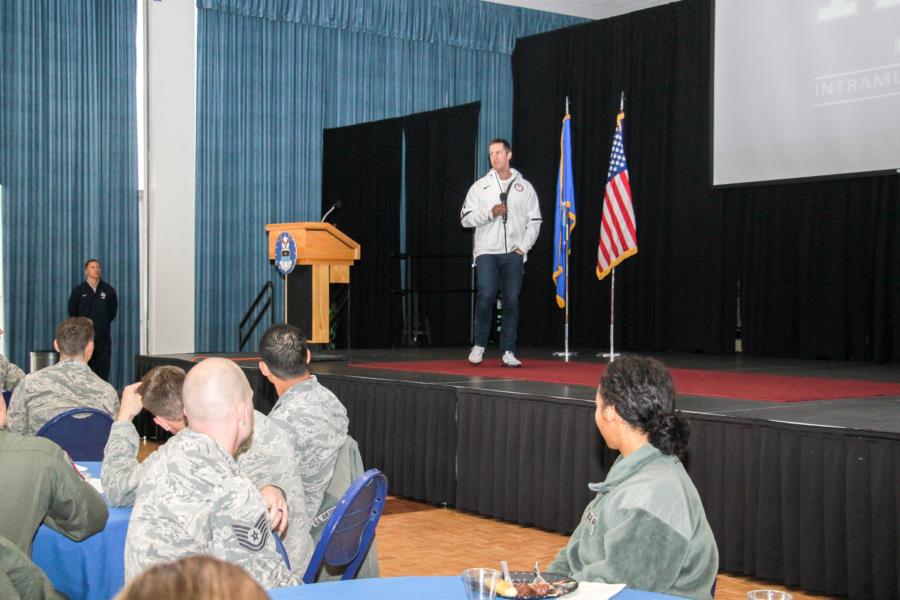 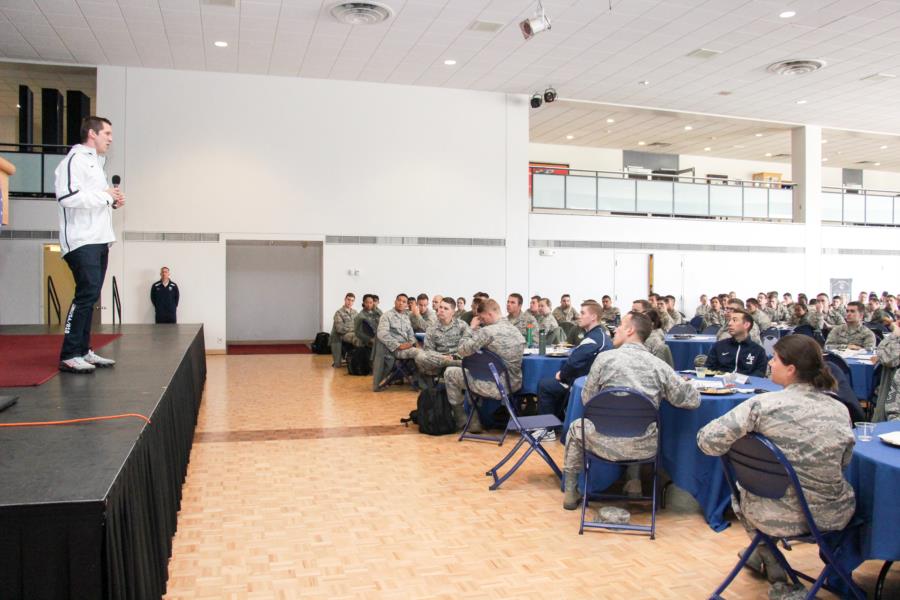 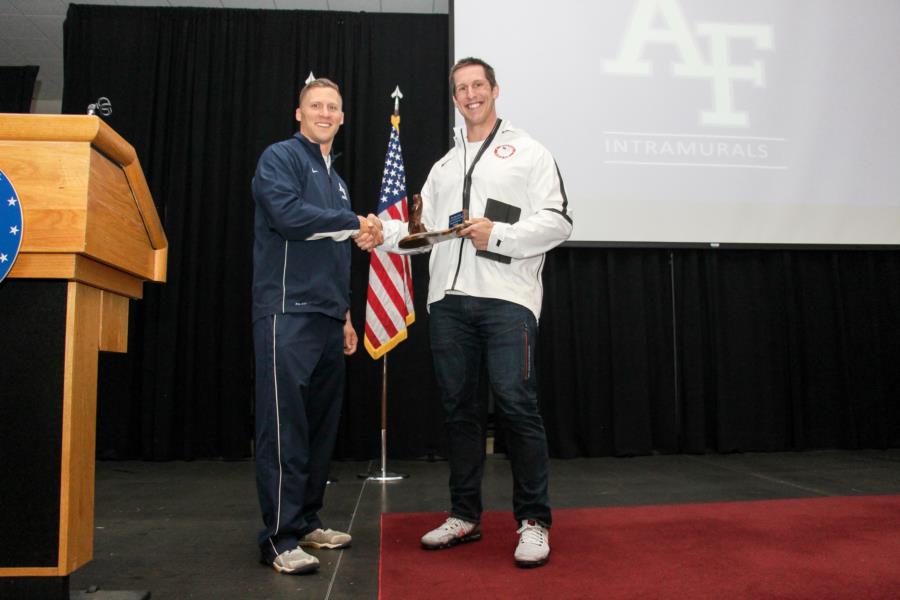 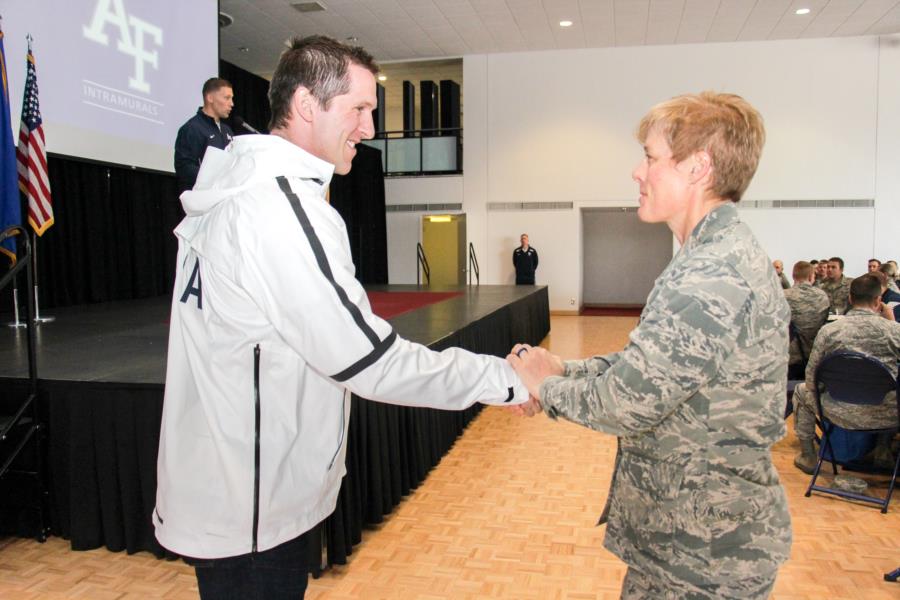 To recap the Squadron winners of each Semesters sports, the team captain/coach came to the front of the stage and received a Squadron Intramural Champions Patch. 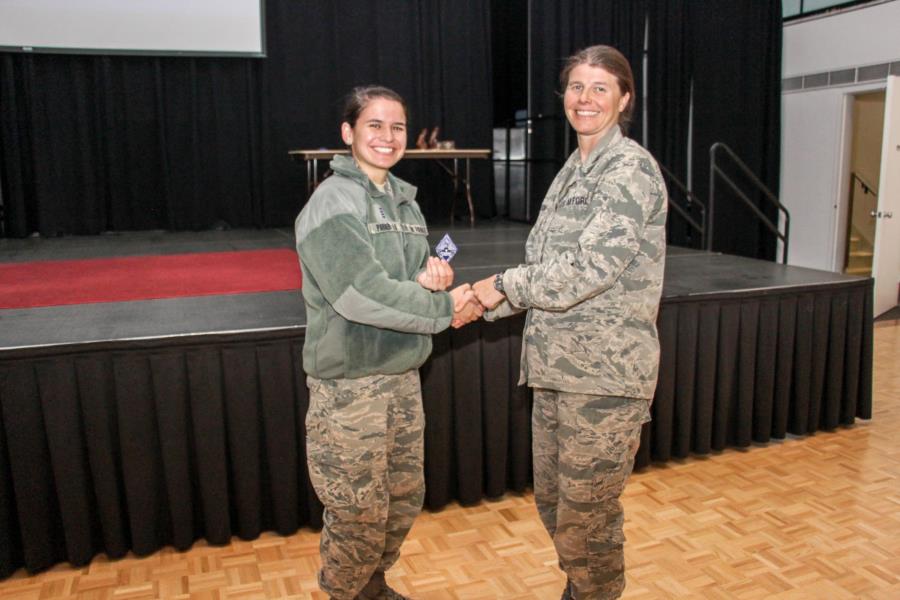 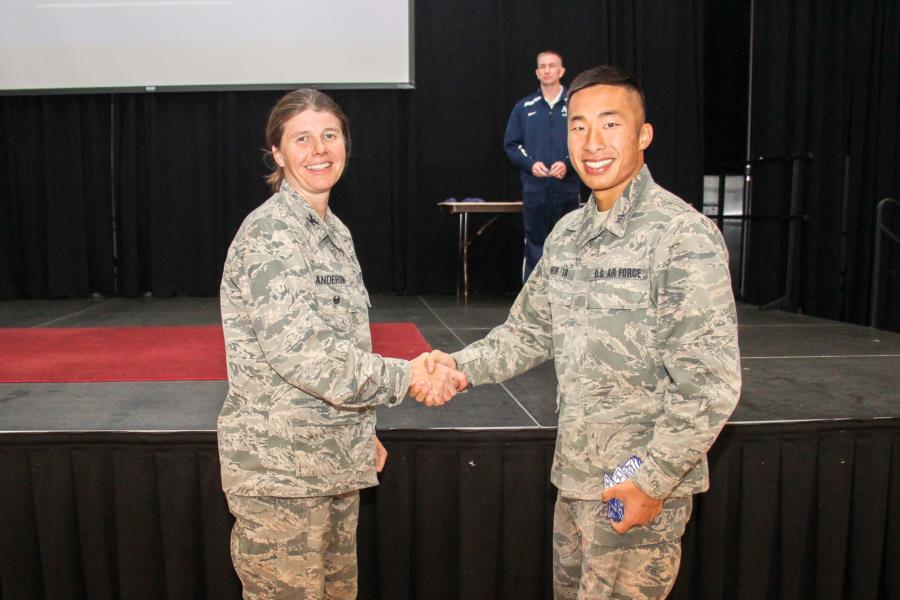 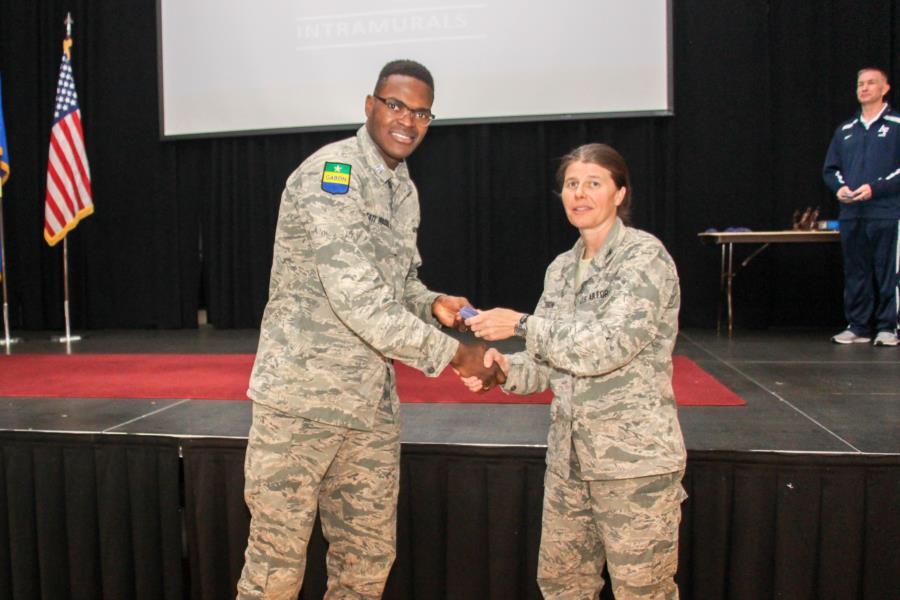 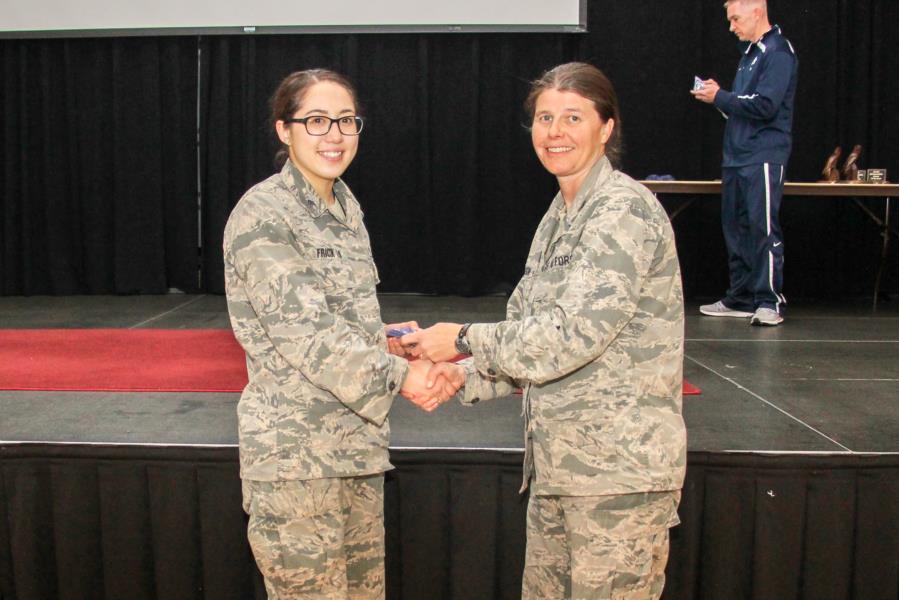 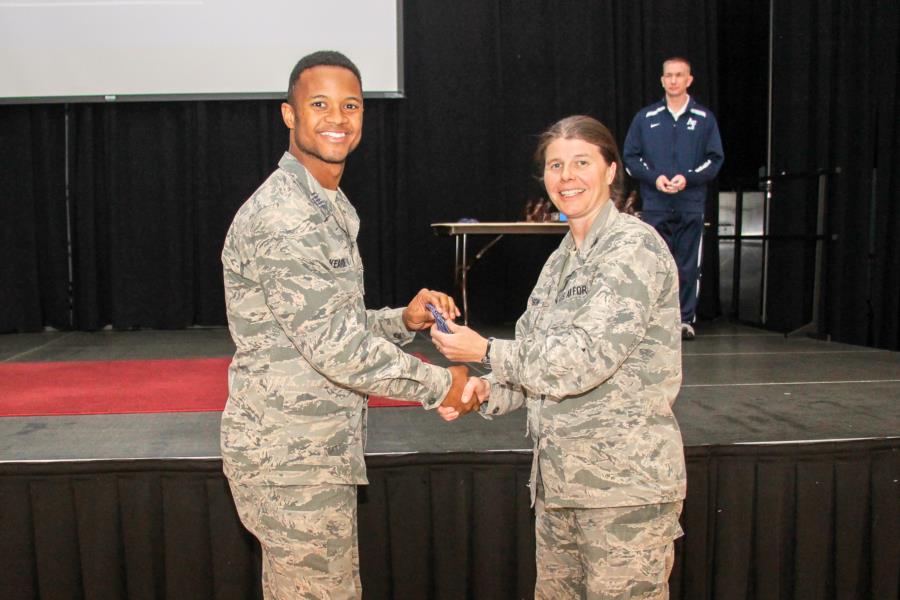 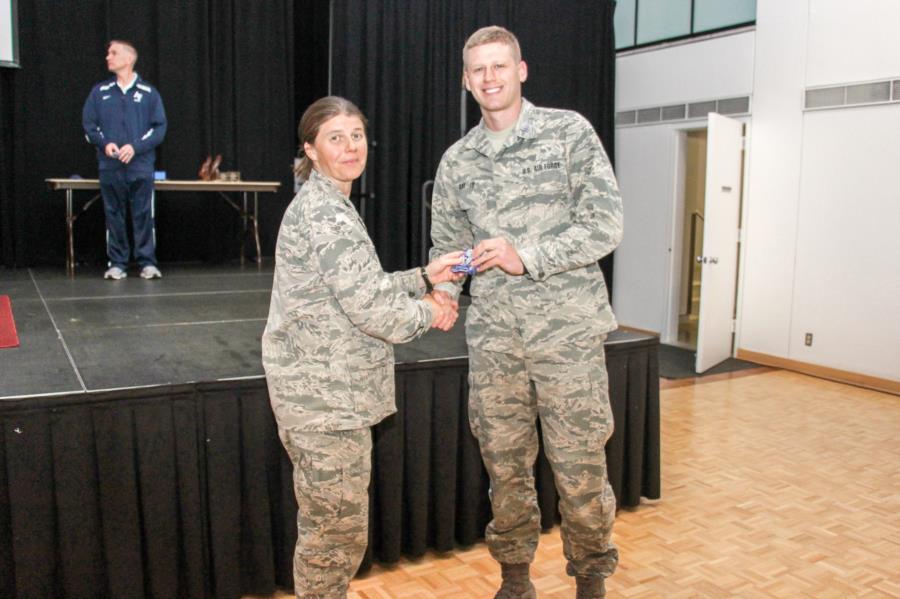 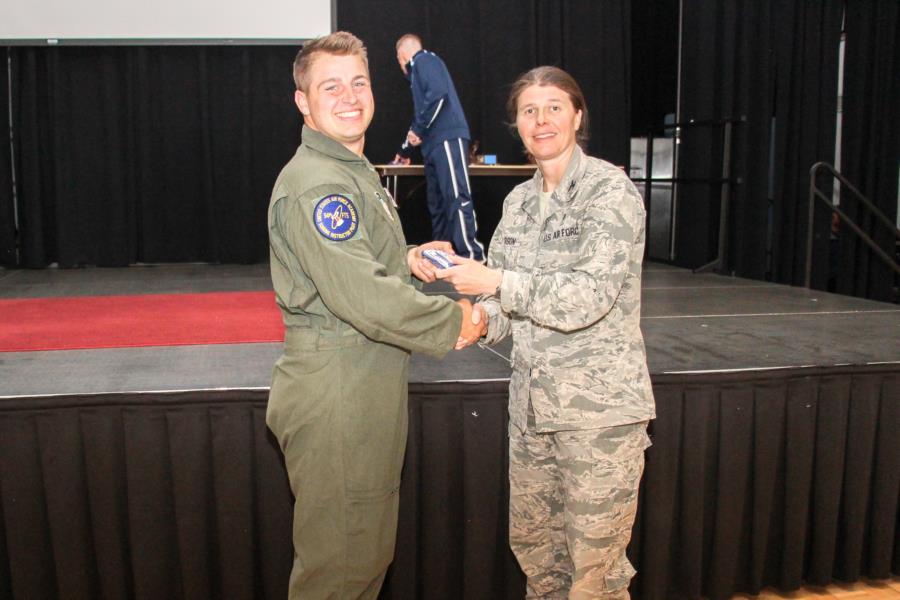 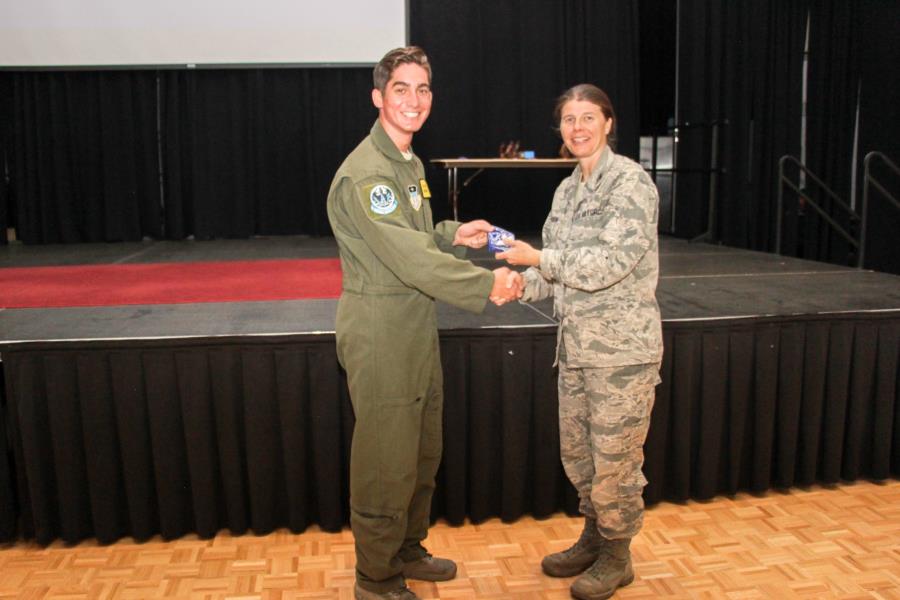 The first award given out was the award for the Intramural Squadron of the Year. “This award goes to the Squadron whose performance has exceeded all other Squadron’s throughout the first 5 sports played in the Fall and the most recent 4 sports played in the Spring. The Athletic Department also took into consideration the Squadron’s involvement as Intramural staff, cadet accountability and total Intramural games won. With a total score of 292.5 Intramural Malanaphy Trophy Points, beating 2nd place by over 40 points, the Intramural Squadron of the Year goes to Cadet Squadron 34!” 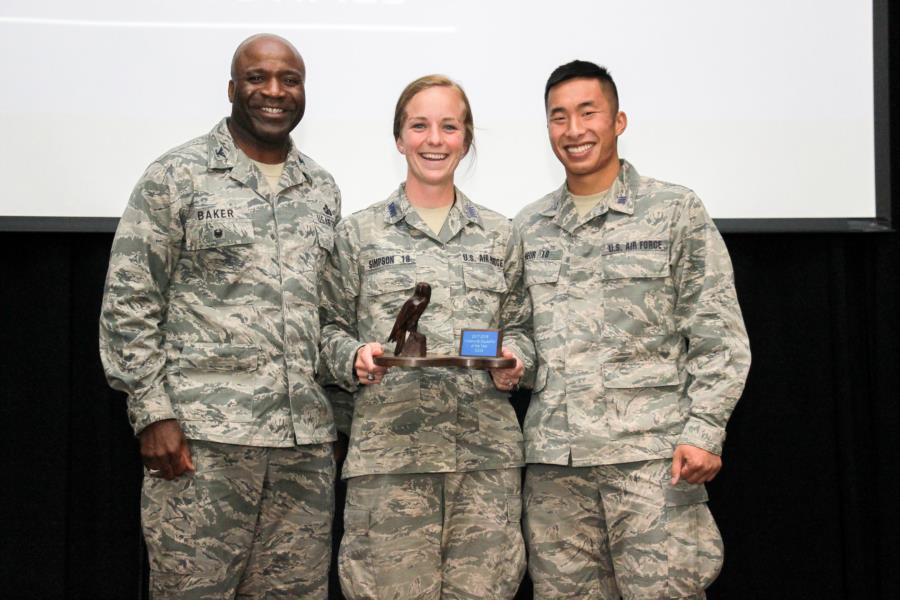 The individual award winners were next.

First up was, the Squadron Athletic Officer of the Year award.  “The SAO is the link between the cadet squadrons and the Athletic Department. They are responsible for the athletic side of the squadron such as setting up intramural rosters or PFT improvement programs, etc. One SAO was selected amongst 80 of his/her peers as the SAO of the year for 2017-2018.”

Next up was the League Sports Manager of the Year award.  “The LSM is the commissioner of his or her sport and is the primary authority for assigning duties and managing over 500 cadets through an 8 game regular season and 4 round post-season.  Their hard work and dedication to the intramural program made this year a success and we cannot over state how vital all LSMs have been to the execution of our Intramural program.  We have been fortunate to have an absolutely outstanding cadet staff that exceeded all expectations.  Every year we recognize one LSM as the LSM of the year, this cadet was selected for their all-round excellence, leadership, and dependability.  That LSM is:” 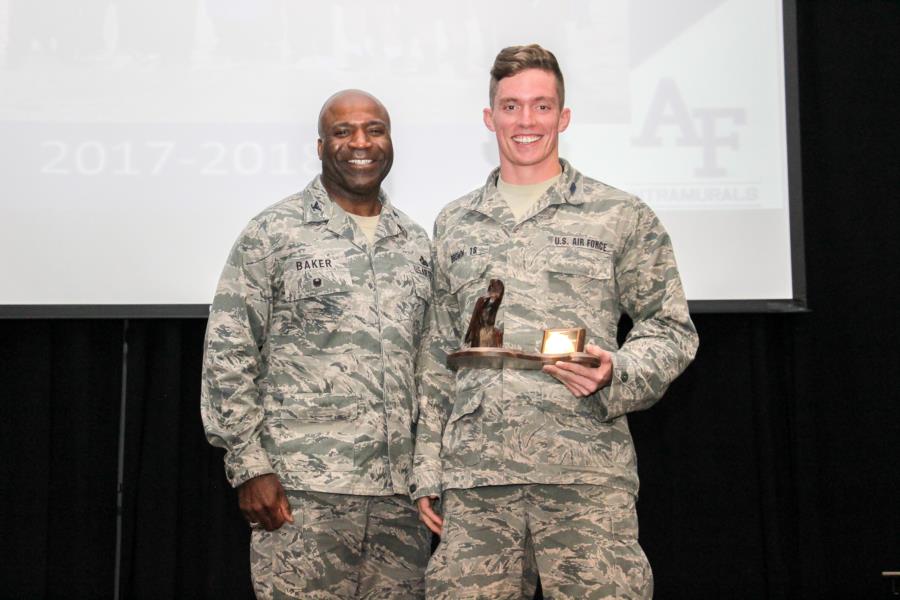 Now for the Male/Female Intramural Athlete of the Year award. “You often hear that every cadet is an athlete. Since individual teams recognize MVPs during their season, we would like to recognize a male and female athlete who have performed above and beyond this year in the realm of intramurals and extramurals. Criteria for this award is fairly simple, they have to have a PEA of 2.7 or higher, a MPA of 2.5 or higher and a GPA of 2.5 or higher and have played in at least one intramural season this year. We take into consideration any extramural games they have competed in as well as how they helped their squadron during intramural play.” 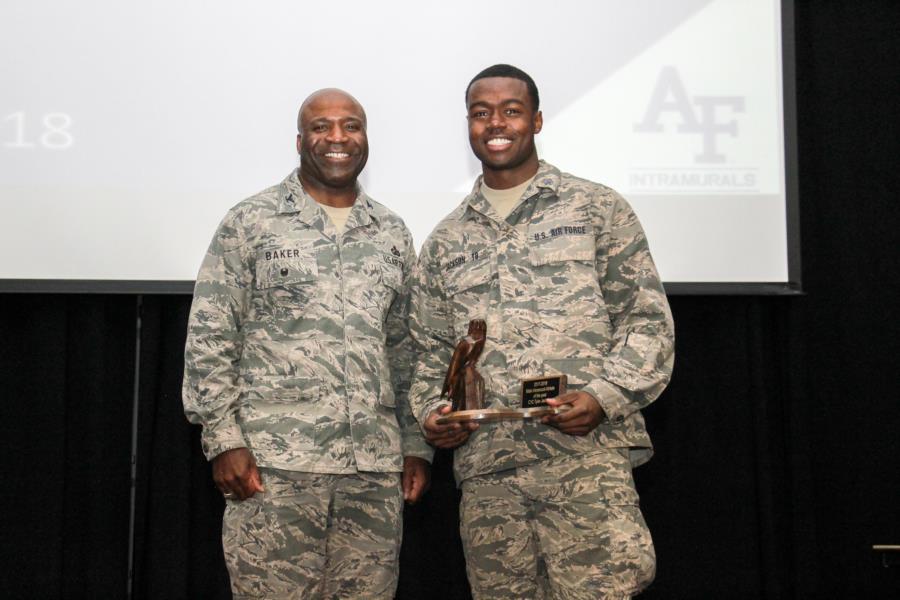 “She has help lead her Squadron’s Intramural Soccer team to the Quarter finals in the Fall and has also played on her Squadron’s Basketball team in the Spring. She played Mid-Field on the Women’s Extramural Soccer team, helping lead that team to the NISRA National Championships. She was instrumental in her role as Point Guard on the Women’s Extramural Basketball team, helping lead that team to win the Denver Invitational, place 3rd in the NIRSA Regional Championships as well as qualifying for the NIRSA Women’s Basketball National Championships.” The winner of the Female Intramural Athlete of the Year award goes to: 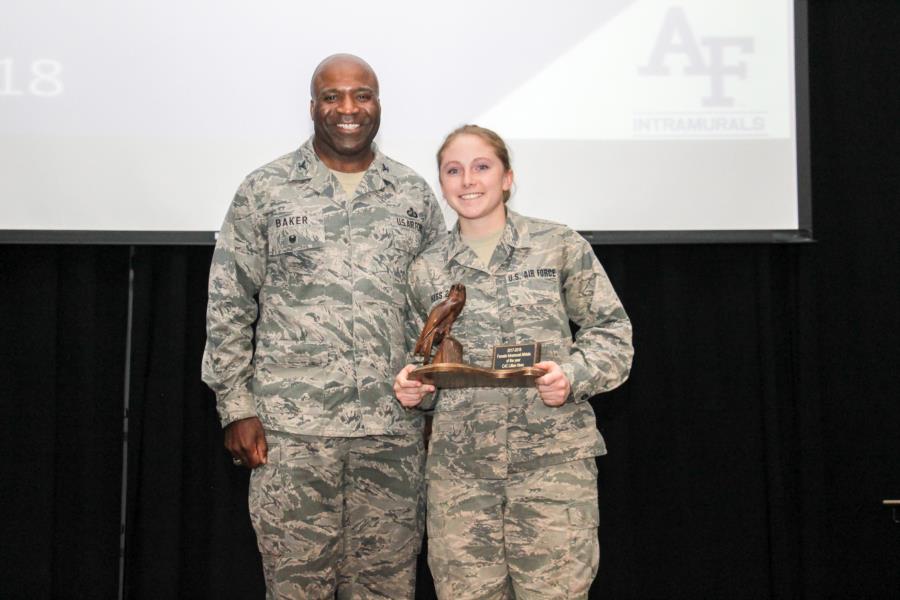 Congratulations to all of the award winners from this year’s Intramurals!

To view the rest of our glimpse into this afternoons banquet go to; Galleries – Extracurricular – Intramurals. Or click the link below.