This week, USAFA hosted the 27th Annual National Character and Leadership Symposium.  This event was first held in 1993 and has grown to be a national/international symposium.  It is held every February at the Air Force Academy and the two day event features speakers from all over the country and some international speakers as well.

Each year the symposium has a theme that is selected based on the overall mission of the Academy.  The theme this year was Valuing Human Conditions, Cultures, and Societies.  Cadets were encouraged to attend as many speakers as they would like and their schedules would allow.

We were able to attend a couple of events during the symposium.  The speakers included Ishamael Beah, Major General Michael A. Fantini, John Urschel, Joel Neep, and Mastora Azero 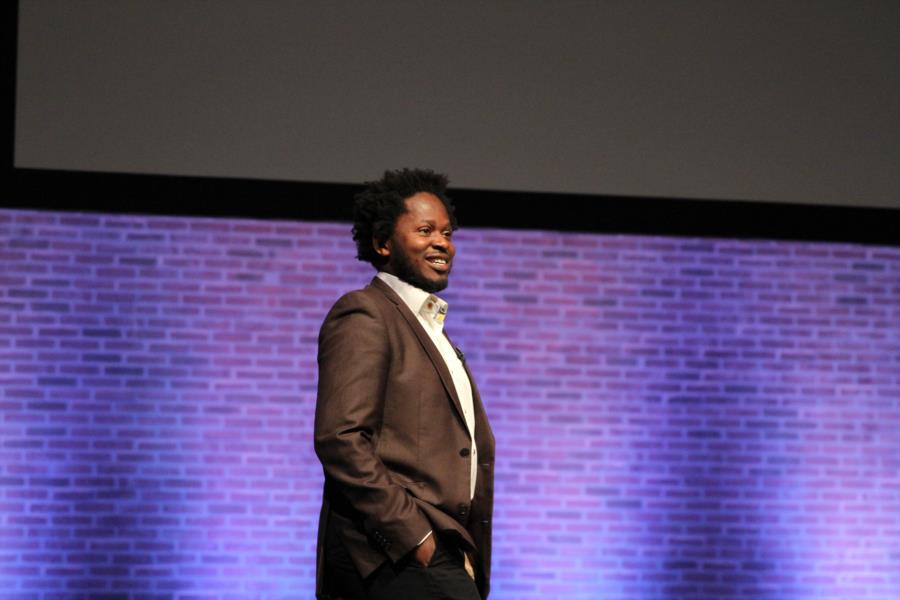 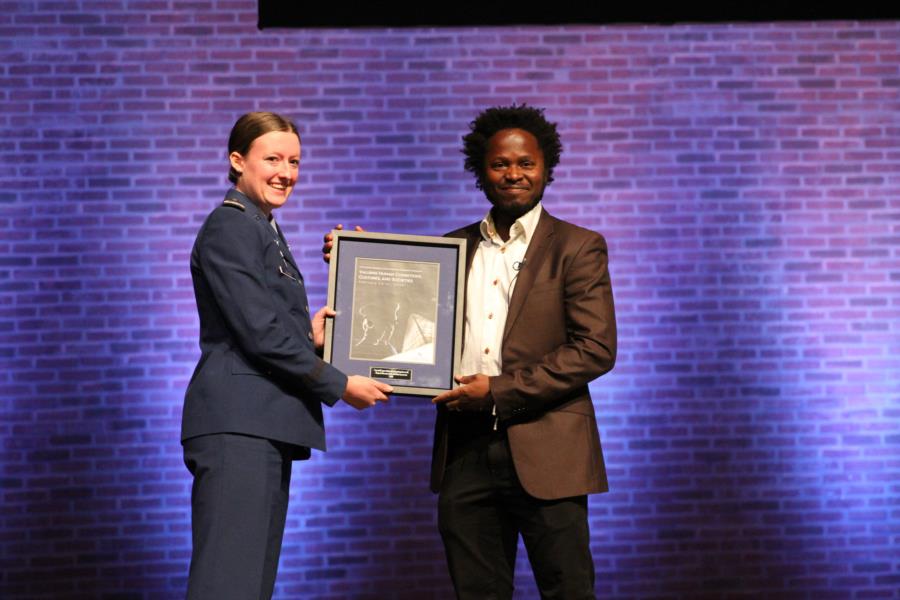 One of the most inspiring speakers was Ishmael Beah, a boy soldier during the war in West Africa that started in 1991. He is from Sierra Leon and was forced as a 12 year old boy to fight in the civil war that was ravaging his country. He lost his entire family to the war.  He was later adopted by a Jewish family and was brought to the United States where he still lives today. His message to the audience was 'If you are alive, there is hope for a better day and something good to happen," which was something his father told him often.  He states that your past does not define you and that we all have the ability to change our lives for the better.

Below is his bio provided by USAFA.

New York Times bestselling author of A Long Way Gone, Memoirs of a Boy Soldier and Radiance of Tomorrow

Ishmael Beah, born in Sierra Leone, West Africa, is the New York Times best-selling author of A Long Way Gone, Memoirs of a Boy Soldier and Radiance of Tomorrow, A Novel both published by Farrar Straus & Giroux.

His Memoir has been published in over 40 languages and was nominated for a Quill Award in the Best Debut Author category for 2007. TIME Magazine named the book as one of the “Top 10 Nonfiction books of 2007,” ranking at number 3. His novel written with the gentle lyricism of a dream and the moral clarity of a fable is a powerful book about preserving what means the most to us, even in uncertain times. Already available in several foreign languages, the New York Times finds in his writing an “allegorical richness” and a “remarkable humanity to his [Beah’s] characters”.

He is based in Los Angeles, California, with his wife and children. 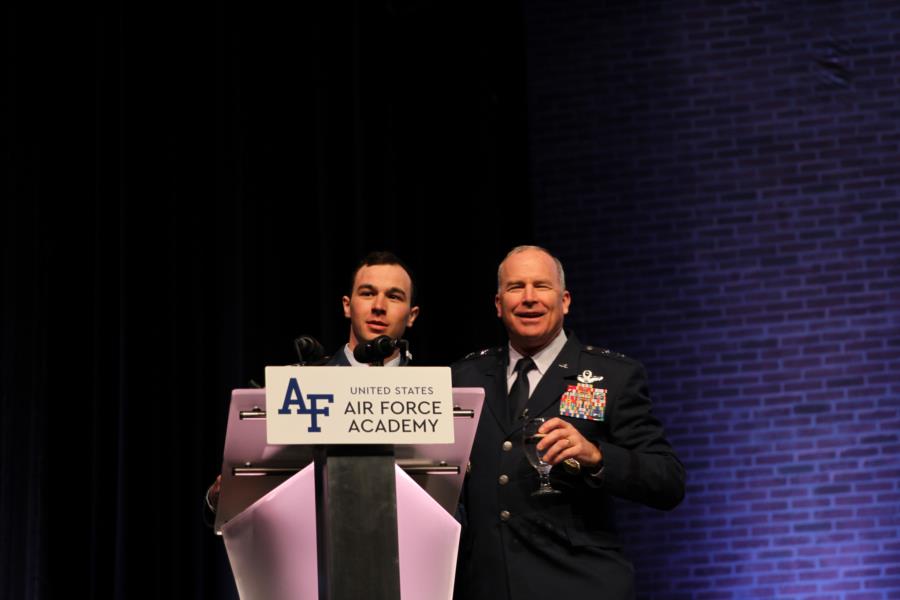 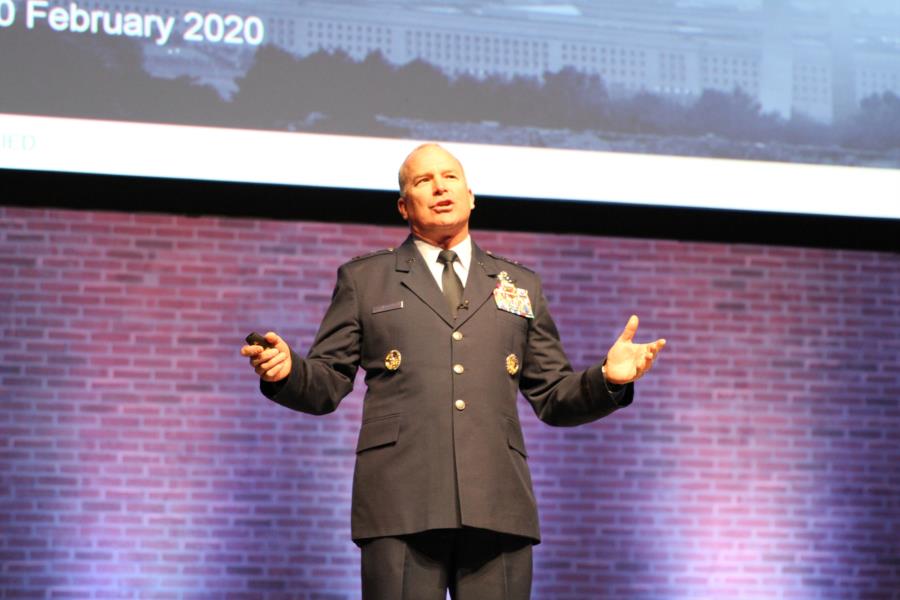 Major General Michael A. Fantini had the pleasure of being introduced by his son, who is currently a cadet at the Air Force Academy. Major General Fantini spoke of perseverance.  During his time at the Academy, he had an eye issue and was told he would not be able to become a pilot in the Air Force, which was his dream.  He spoke of having cancer shortly after finishing pilot training and being told he would not fly for at least 3 years.  During different times in his life, he persevered in his dream of being an aviator. He also gave a challenge to the cadets in the audience and to those currently in the military. The Challenge was, "What is going to keep you in the AF? What is your why? Why keep serving?

General Fantini graduated from Catholic University of America and was commissioned through the ROTC program at Howard University. Following graduation, he served in a variety of operational assignments as an F-16 pilot, instructor pilot and weapons officer. He has commanded a fighter squadron, the 332nd Expeditionary Operations Group in Balad, Iraq, the 82nd Training Wing, Sheppard AFB, Texas, and the 451st Air Expeditionary Wing, Kandahar, Afghanistan. He has served in multiple staff positions, including Chief of the Fighter Weapons Branch, Secretary of the Air Force Office of Special Programs; Operations Officer and Deputy Division Chief of Global Force Management at the Joint Operations Directorate; Director, Combat Force Application and Operational Capabilities Requirements.

In his previous assignment, General Fantini was Commander, Kandahar Airfield (NATO), Kandahar, Afghanistan. As COMKAF, he was responsible for the operational efficiency and readiness of Kandahar Airfield. He acted as Senior Airfield Authority and a task force commander-equivalent in defense of the airfield exercising centralized coordination of airfield operations, logistics, NATO assets and real estate management while leading all force protection actions in defense of nearly 22,000 assigned and attached personnel. 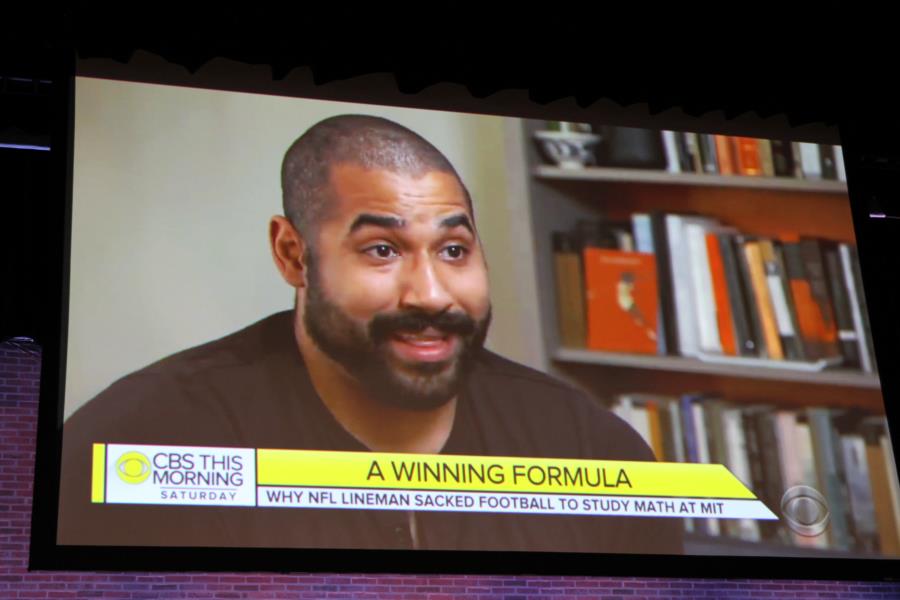 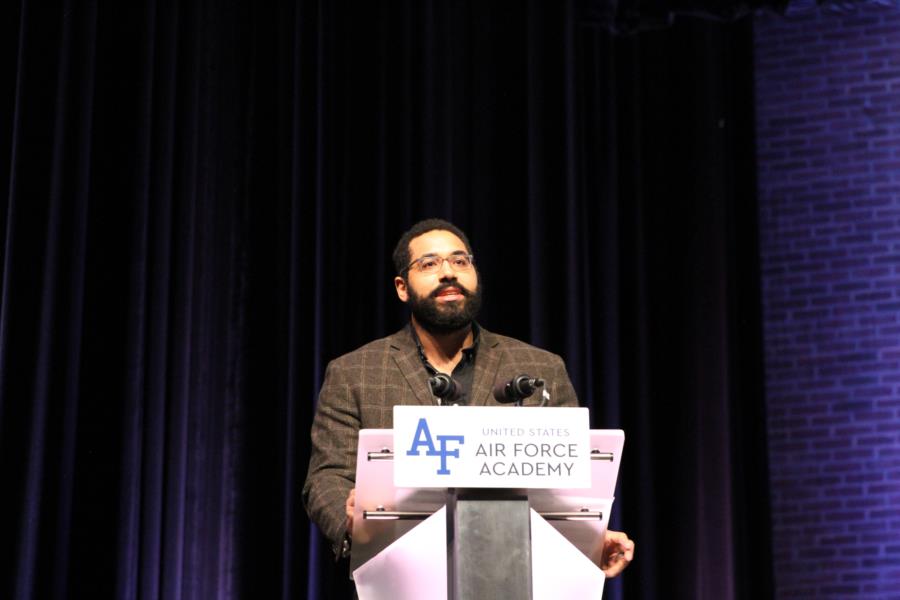 John Urschel gave an inspiring speech about knowing what your dreams and aspirations are and to pursue them, even if others don't believe you can achieve them. Stay true to yourself.  Mr. Urschel excelled at football and had coaches, teachers, and others in his community encouraging him to continue football. But he remembers no one encouraging him to pursue his interest in math.  He had an ability, like his mother, for complex math and he enjoyed it. He states that he craves the mental challenge of math which is different than the physical challenge of football. He pursued his PhD in mathematics while playing in the NFL for the Balitmore Ravens. He retired from the NFL in 2017 at just 26 years old to pursue his true dream of being a mathmetician.

John Urschel is known for the exceptional status he holds in two very disparate and demanding professions: mathematics and pro football. Equally brainy and brawny, half MIT and half NFL, he is committed to promoting the importance of both math and sports as critical to the development of life skills.

Challenging an opponent on the football field and facing a stubborn problem on a whiteboard are both tasks that require mental agility and near-obsessive focus. The ultimate "mathlete" and a living example of all that's good about school athletics, Urschel is powered by his twin passions, his competitive spirit, and his drive for excellence. He embodies the values of dedication, hard work, discipline, and teamwork.

Whether discussing vital math and learning skills, the physical joy and mental satisfaction of playing a football game — or how he manages it all — Urschel revels in his role as an ambassador for the two elite and seemingly incongruous professions he cherishes equally.

Born in Winnipeg, Canada, Urschel holds a master's degree in mathematics from Pennsylvania State University. In addition to playing football for the school, he lectured in math, published a number of peer-reviewed articles and, among other honors, received the Kermit Anderson Award in Mathematics.

Urschel's numerous athletic awards include CoSIDA Academic All-American, All-Big Ten, Associated Press All-American, the Campbell Trophy, and the Sullivan Award. In 2014 he was drafted by the Baltimore Ravens, where he is an offensive lineman.

Urschel is currently a Dean of Science Fellow at the Massachusetts Institute of Technology pursuing a Ph.D. in Mathematics with a focus on spectral graph theory, numerical linear algebra, and machine learning. 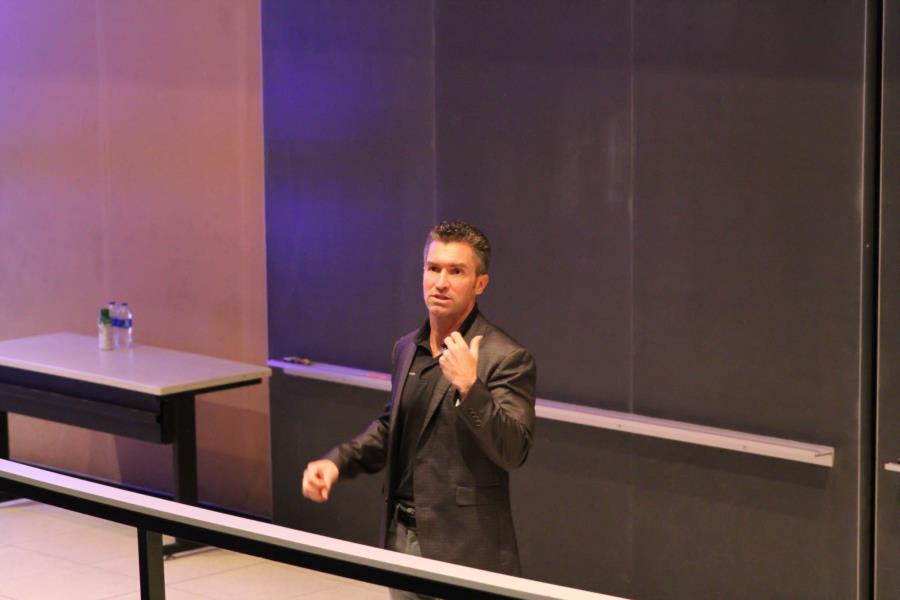 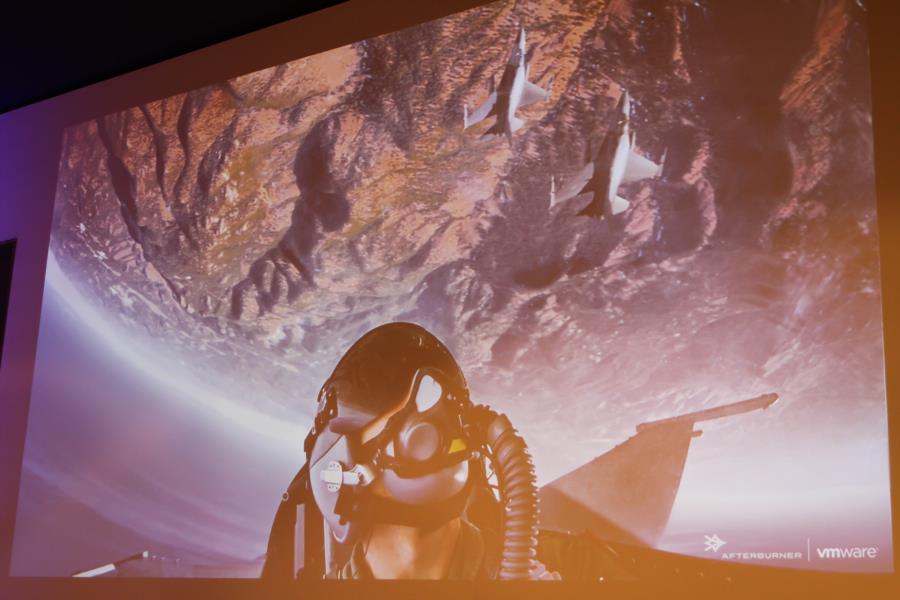 Joel "Thor" Neeb was an F-15 pilot at the height of his career with a wife and two small children when he was diagnosed with Stage 4 cancer of the Appendix.  He was given just a 15% chance of living. In a matter of 4 weeks, from when he went to the doctor for pain in his side to his arrival at the hospital for treatment, his entire life was turned upside down. Mr. Neeb is now 10 years post cancer treatment and tries to live life to the fullest.  He has competed on American Ninja Warrior, climbed Mt. Kilimanjaro, and plunged into Antartica waters in just his swimsuit.   His message had three parts. 1. Growth- He encouraged everyone to challenge themselves and to step outside of ones comfort zone. This is how a person grows in all aspects of life. 2. Giving-Giving to others helps us forget our challenges and problems and allows us to help others overcome theirs. 3. Gratitude- Be grateful for what you do have.  Don't focus on what you don't have. We each have a choice in how we react to situations in life.  His final message was to 'Live your obligation." He stated he didn't have survivors guilt, but had what he calls survivors obligation.  An obligation to live the life he was meant to live, even if that means going out of his comfort zone.

As an F-15 pilot, Thor escorted the U.S. President through the sky and flew missions to ensure the safety of the country after the attacks of 9/11. He was the tactical leader of 300 of the most senior combat pilots in the Air Force and he oversaw the execution of a $150M/year flight program. Thor was named the Top Instructor Pilot at the Air Force Flight Training Headquarters and he’s flown thousands of missions teaching pilots from 25 countries around the world. He received his Bachelor’s Degree at the United States Air Force Academy and is a summa cum laude graduate of the McCombs School of Business at the University of Texas. He is Afterburner’s expert leadership speaker, sharing his knowledge with organizations across the US.

For most of 2015, Thor led a team of Afterburner consultants that was embedded in Silicon Valley with one of the top-five largest software companies in the world. While there, Thor supported the successful completion of more than 50 projects or “Missions” created from the CEO’s key strategic objectives.

Thor is humbled to have had the incredible experiences that executive leadership within the military and Afterburner have afforded him, but he’s most proud of the following accomplishments. In 2010, Thor was diagnosed with Stage IV cancer and given about a 15% chance to live. Instead of giving up, Thor decided to give back. He started a youth outreach program in San Antonio that has grown to help more than 15,000 at-risk kids. Their efforts have been featured on every news channel for 100 miles and one national media outlet. In 2012, he was selected out of 62,000 people to receive the AETC National Public Service Award.

Thor completed the New Zealand Ironman Triathlon in March of 2015 to commemorate the five-year anniversary of his Stage IV cancer diagnosis and to raise awareness for the rare and deadly cancer that he battled.

Thor sits on the board of several national organizations and is the co-founder of a military support corporation. As Afterburner’s CEO, Thor leads our team of more than 70 elite military professionals. He has helped achieve strategic objectives and foster elite teams for Fortune 100 companies within the tech industry, pharmaceuticals, finance, medical devices, retail apparel and several NFL teams. 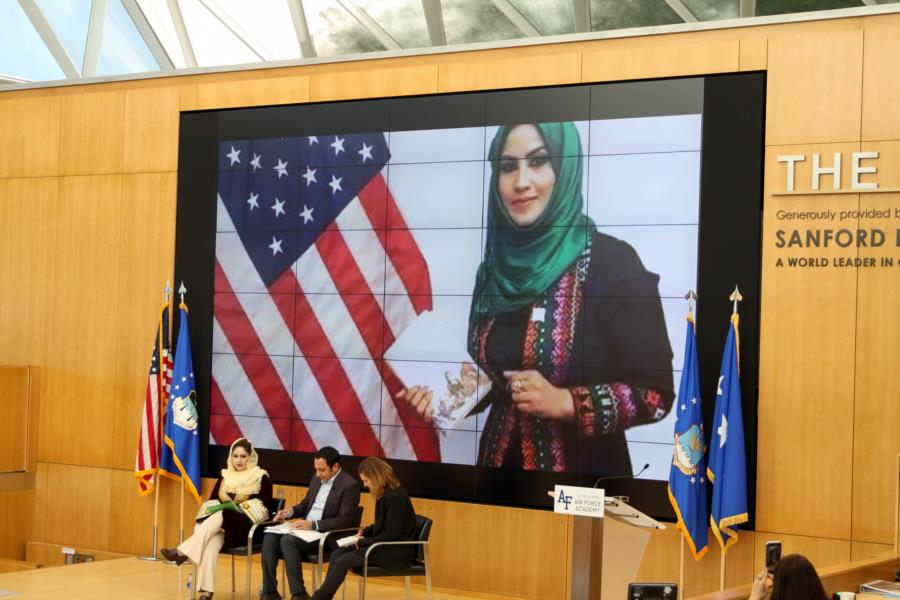 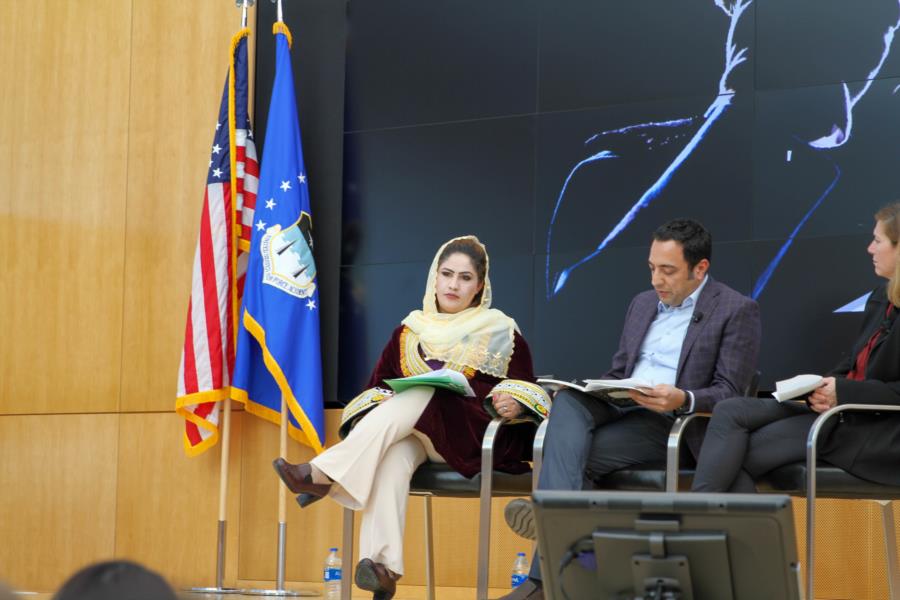 Mastora Arezo gave a speech about what it was like growing up in Afghanistan once the Taliban took control of the country. She spoke of how women used to have rights and equalities similar to men, but all of that changed with the Taliban rule.  Mastora Arezo has been campaigning and fighting for womens rights for many years. She is quoted as saying, "I grew up experiencing Taliban rule. All I hope for is a change for the better as we need to move forward."  Mastora Arezo is the president of the Afghanistan Badminton Federation and uses this plateform to promote women in sports, womens equality in all aspects of life, and to empower young girls.

Below is her bio provided by USAFA

Mastora Arezo is a remarkable, influential Afghan woman.  She recently completed a political campaign in the heart of extremist-controlled territory, courageously getting her message of hope and encouragement out and inspiring the young and old as the face of Afghanistan's future. For her outstanding work in Afghanistan, she was awarded a Leadership Award by the Laura Bush Foundation and prominently featured in the best-selling book WE ARE AFGHAN WOMEN VOICES OF HOPE by the George W. Bush Institute.

To view photos, go to, Galleries > Military Training > Character and Leadership Development or click on the link.