The event itself was made possible by the Maine USAFA Parent’s Association, which currently has 25 members. Those who were able to represent the group for the event at USAFA included Adrienne and Dr. David Carmack (parents of Thomas ’21, who both have an Air Force background) and Sue Foelix (Parent of Toby ’21).  They know that all cadets are making a significant personal sacrifices compared to their friends in civilian colleges. As such a small group, they wanted to create an opportunity for them to visit each other. They also wanted them to know that they are supported by parents and importantly, that the STATE of Maine appreciates their commitment to service. Many of those who were able to attend the Academy for Maine night are registered to attend the NCLS Symposium which begins this week. 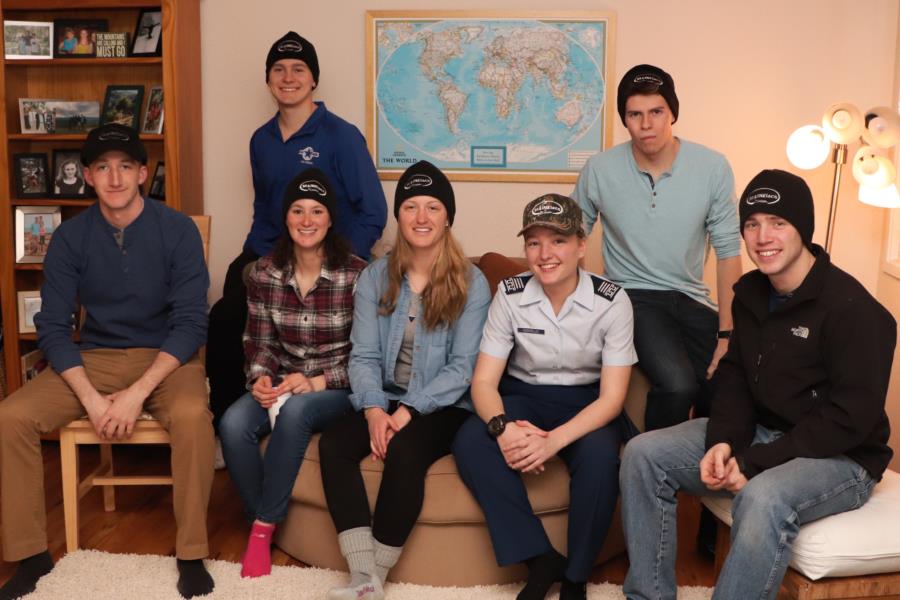 Maine is known for informal “suppah”. . .so they served pulled pork, chicken and hot side dishes that were pick up locally due to their travel time and kitchen constraints.  They complemented that with homemade coleslaw, corn bread, and blueberry pie, (they brought frozen Maine blueberries that were picked locally last summer).  When the cadets were polled about the things they love and miss most about Maine, besides the natural beauty and people, 25% said whoopie pies. . .so THOSE were on the menu too. 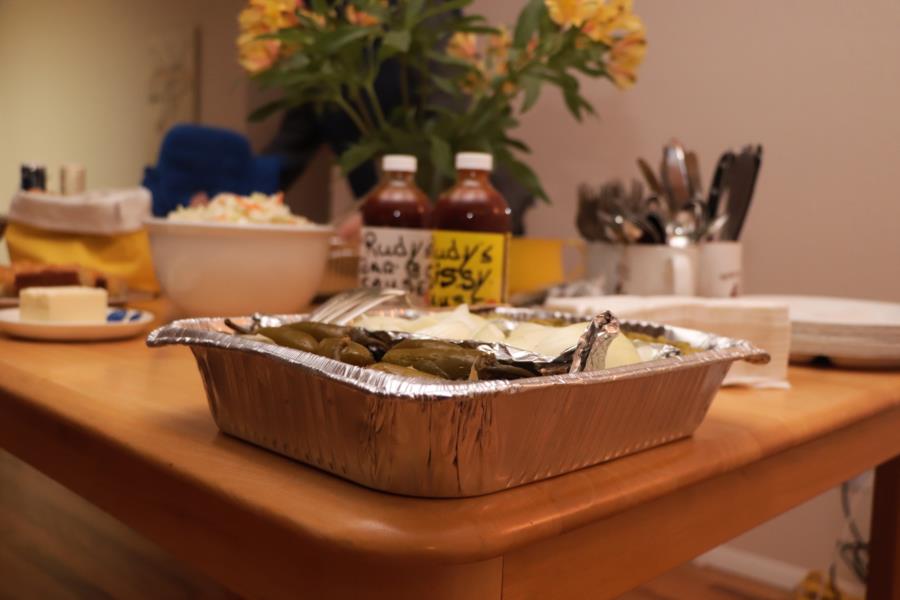 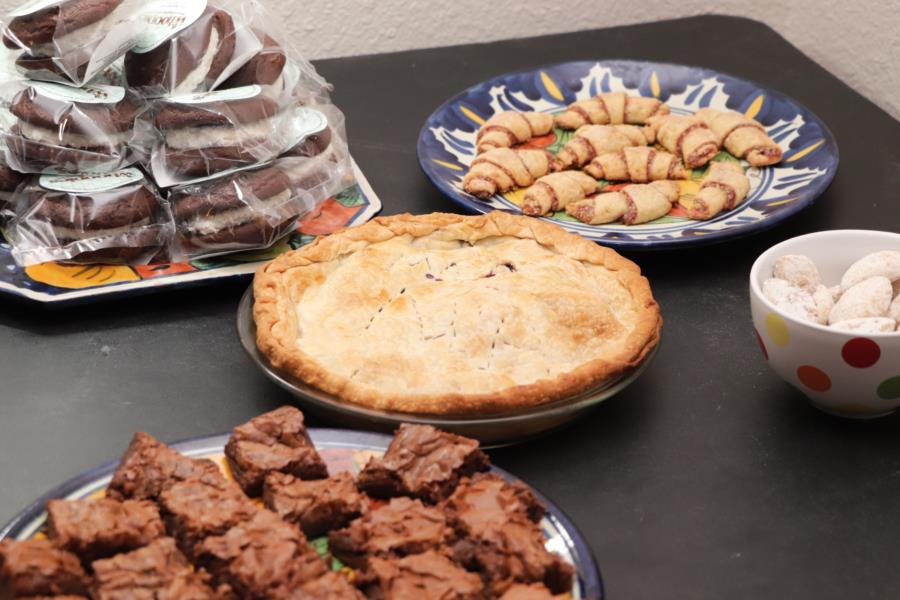 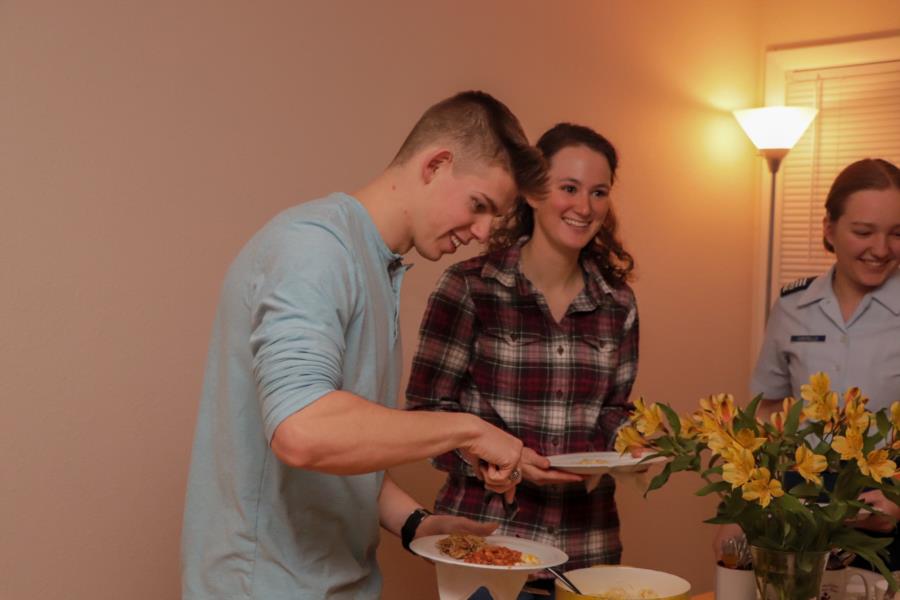 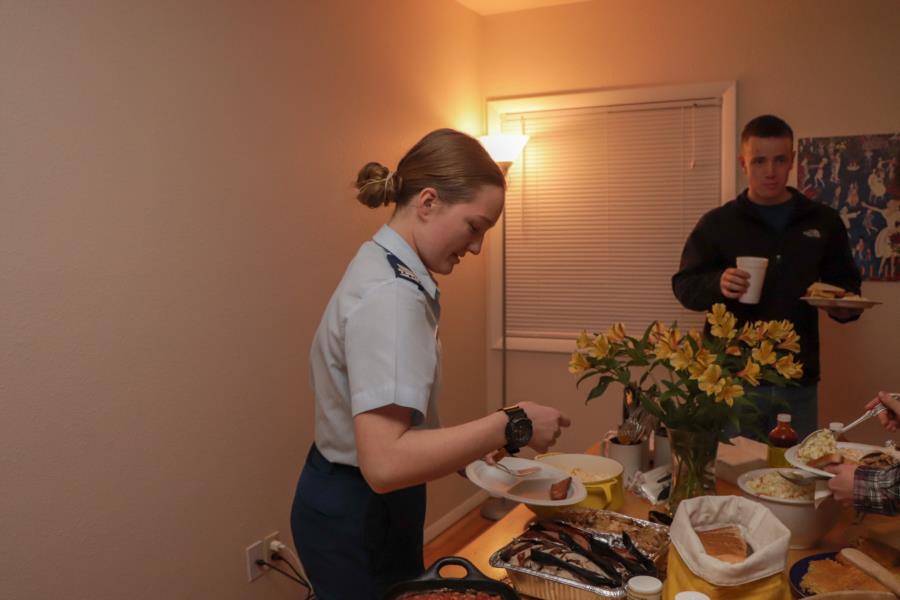 All four of the State’s Leaders in Washington rallied to acknowledge Maine’s cadets.  Senator Angus King and Senator Susan Collins sent a collective letter to the cadets from Maine acknowledging their success to date and encouraging them forward.  Representative Chellie Pingree and Representative Jared Golden each sent letters to the cadets who hail from their respective districts.  These letters will be given to the cadets during the Maine Event.

Marcia Wiggins, founder of Cape Whoopies in Portland Maine generously offered to donate fresh whoopie pies for the USAFA cadets.  As a back story, Marcia’s husband left college to enlist in the Air Force during the Vietnam War.  After his service, he completed his degree and went on to fly commercially.  She claims that her husband believes that joining the Air Force was the best decision that he ever made. 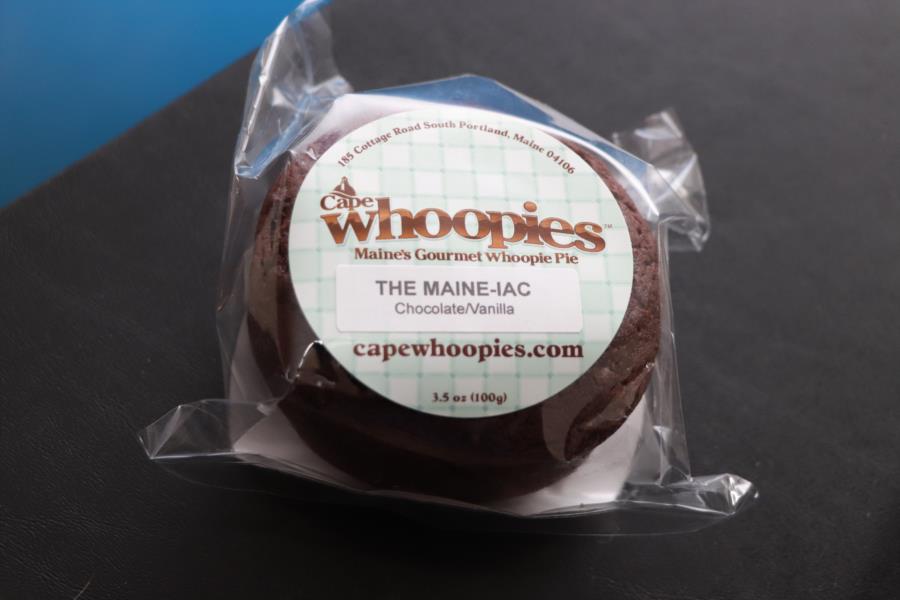 Maj Gen Douglas Farnham, Adjunct General for Maine’s National Guard, has taken the time to come and meet Maine’s cadets at the annual BBQ.  As a show of support for Maine’s USAFA cadets, he provided “Maineiac” hats to be given to the cadets as a reminder of home and of the collaboration between all teams within the military. DownEast Magazine provided multiple full year subscriptions to be raffled off at the event and bumper stickers as a reminder for everyone. 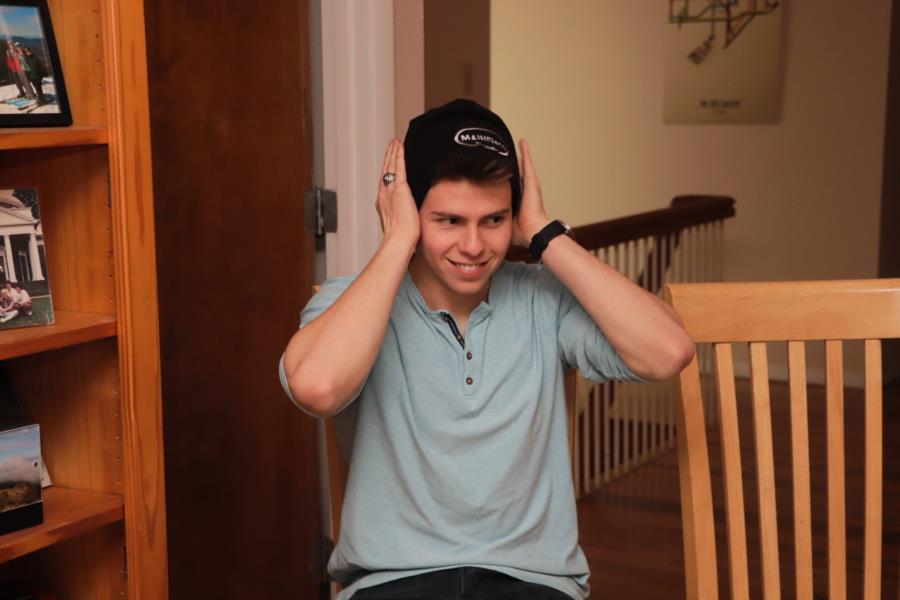 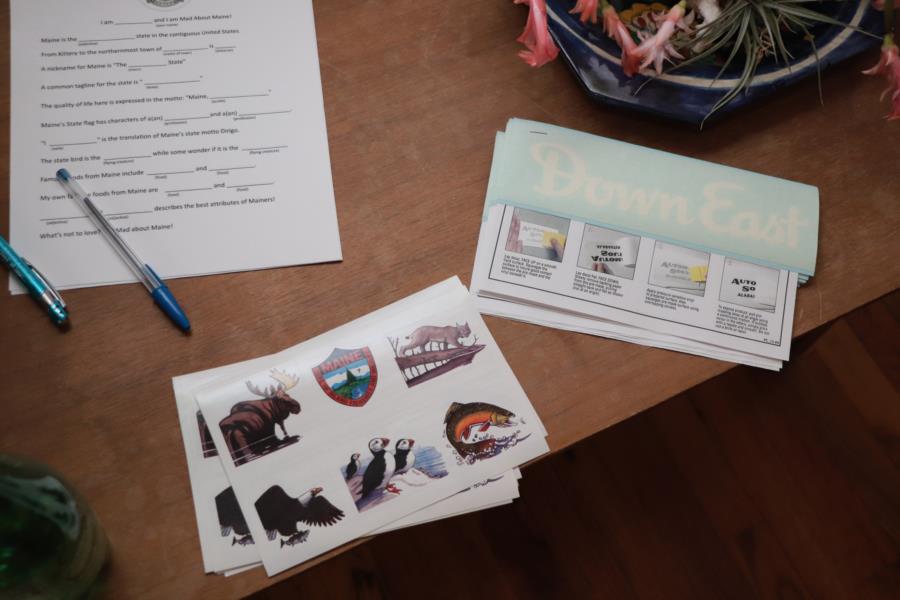 Dr. Margaret Killinger, (Mimi) -  Rezendes Preceptor for the Arts, U Maine; (BA UVA, MTS Duke, MA Emory, PhD U Maine).  Mimi is at USAFA this year as an Adjunct Professor of History and Chief of Research, Integration and Assessment for the USAFA Center for Character and Leadership Development.  She is opened her home on base to host the Maine Event and they are grateful for her support. 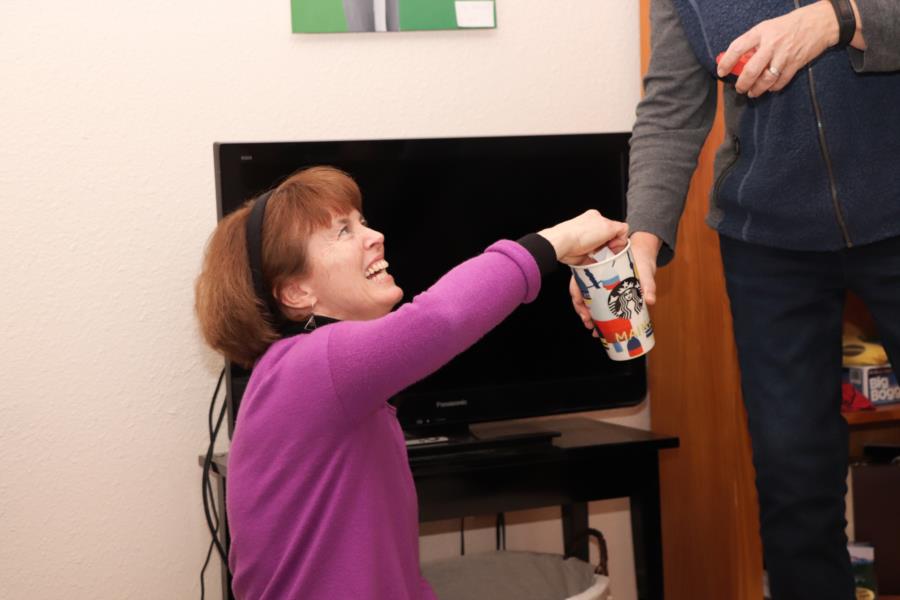 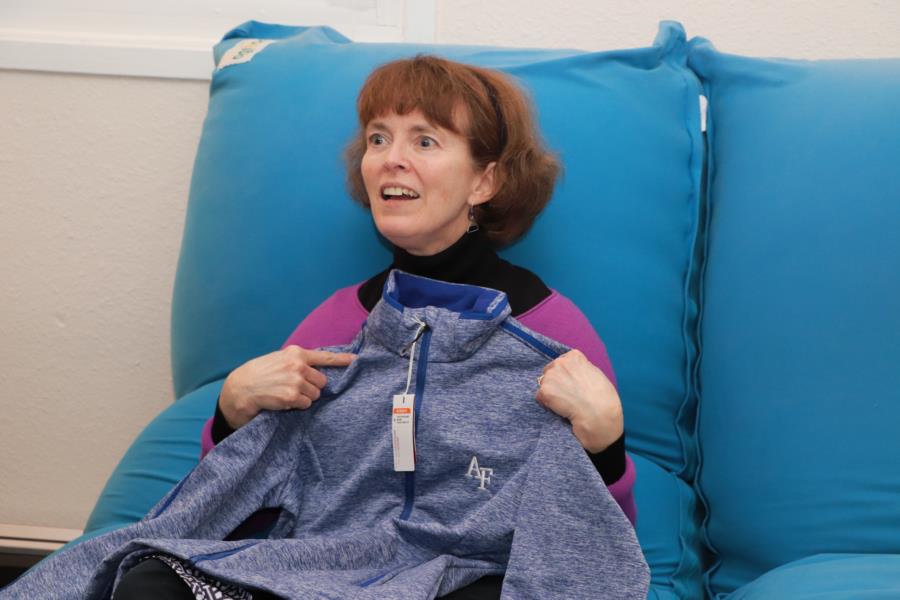 The parents wanted to let the cadets know that they are all proud of all of you!  The Academy is providing you an education that will build character and make you ready to lead within the Air Force and when that service is done, to also lead with intention and integrity in any endeavor.  Be open to opportunity that presents and “Always bear in mind that your own resolution to succeed is more important than any other.” – Abraham Lincoln.

To view the rest of the pictures of this gathering go to Galleries > Extracurricular > Special Events or click the link below.