This week we were able to get out to Falcon Stadium and capture the Wings of Blue doing practice jumps into the Stadium in preparation for this Saturday’s game against Navy.  Webguy will not be covering the game and so we took this opportunity to highlight the Wings of Blue program.

A brief summary of the history of parachuting here at USAFA. It all started in the spring of 1962 when a band of bootleg jumpers made their first parachute jumps as cadets. Using condemned SERE rigs and local aviation pilots, these cadets made several jumps in the Colorado area. During that spring, a few cadets by the names of Aronoff, Davis, Kelley, McCurdy and Sijan – at their own risk and expense–made several demonstration and competition jumps to include our 1st collegiate-national appearance in Wisconsin winning a gold medal. They had no sanctioning from the Academy; truthfully, the Academy had no idea. When words of their jumping escapades got back to the superintendent, the Academy leadership was facing a dilemma—punish these outlaws or reward these collegiate competitors—needless to say, there were some rocky times those first two years, but after receiving a challenge from the Commandant of West Point to compete in a Para meet—club status resulted in May 1964. Under the careful guidance and nurturing of Cadet Pete Johnston, the club grew with great renown not only in the cadet wing, but the skydiving community as well. His efforts along with those of the graciously volunteering officer and enlisted core such as Capt Craig Elliot, Capt John Garrity, SSgt Mort Freedman and MSgt James Howell helped set the foundation for the now internationally known United States Air Force Academy Parachute Team Wings of Blue.

Continuing to dominate competitions at the collegiate level and expanding their renown both nationally and internationally through venues such as the BCS championship game and Air Shows the Wings of Blue has developed from the small unsanctioned team 49 years ago. The Wings of Blue has been an aspiring venue through which many great leaders and officers have grown from. It is hard to say that without such rich history, such heights would never have been possible.

Here are some chronological highlights of the 49-year history of parachuting at the Academy.

The Wings of Blue have a long-standing commitment to personal and organizational excellence as well as a storied history of success. While the airspace that the Wings of Blue operates in is one of the busiest in the world, their drop zone is one of the safest. The primary mission of the Wings of Blue is to run the Air Force’s Basic Freefall Parachuting course, known as Airmanship 490 (AM-490). Members of the team serve primarily as jumpmasters and instructors for this course, devoting most of their time to teaching students about parachuting and training them to make unassisted freefall skydives. AM-490 is the only certified first-jump program in the world where students can make their first freefall jump without assistance. Each year, over 700 cadets are given the opportunity to take AM-490 and earn their jump wings.

Each year, the Wings of Blue Demonstration Team performs at more than 50 special events in front of over 2 million spectators. Demonstration venues include airshows, NFL and College football games, and special events across the nation and around the world. The Wings of Blue have demonstrated their intricate aerial skills at major venues such as the BCS National Championship Game, the Orange Bowl, the Rose Bowl, the Fiesta Bowl, the Buffalo Wild Wings Bowl, NFL Monday Night Football games, NASCAR Races, civilian airshows, and DoD Open Houses. Wings of Blue demonstrators strive for excellence at each performance, both in the air and on the ground. The Wings of Blue Demonstrators are proud to represent the United States Air Force and the Air Force Academy. They understand that they represent over 200,000 active duty airmen serving around the world. The Demonstration team also takes the time to impact each community they visit throughout the show season, not only at the demonstration site but also through hospital and school visits, hoping to share their mission and inspire all they meet to strive for noble goals.  Wings of Blue Demonstrations are tailored based on the show site the team is jumping into. Jumpers in the demo can vary from 4-14 and can jump from altitudes varying from 2500’ to 15000’ above the ground. Demonstration jumpers typically wear smoke grenades to add to the visibility for the crowd on the ground. Jumpers also can carry any type of flag or multiple flags with a flag drop down system. Additionally, jumpers fly streamers, carry game balls or other valuable objects, and also fly a massive 800 square foot American Flag! Popular demo maneuvers include the Wings of Blue bomb-burst, in which jumpers utilize their flying skills to join in formation in the sky. Upon command from the lead jumper, each skydiver performs a 180 degree turn and tracks in separate directions of the flight line, creating an incredible burst effect. Upon deploying their canopies, the Wings of Blue set up canopy “stacks” and land in succession on the target area. Demonstrators also sometimes perform Canopy Relative Work (CRW) in which they join their parachutes together and fly as one. Each demonstration is complemented with a special soundtrack and narration for full crowd engagement. Upon landing, demonstrators move immediately to the crowd, where they will sign autographs, take pictures, and answer questions.

Unfortunately, due to Covid, Wings of Blue will not be performing their normal schedule of events.  The Stadium jump this coming Saturday is only 1 of 2 events scheduled for this fall.

Jumping into the Stadium this week were Wings of Blue Cadets and Active Duty Jump Instructors.  Jumping into a stadium is more challenging due to wind variations from outside the stadium to inside and with a tighter approach area and landing zone.  After each jump, the instructors evaluate the cadets jump and are given a debrief on areas executed well and on areas needing some adjustment or improvement.  It takes considerable skill to jump into a stadium and the Wings of Blue displayed that skill this week. 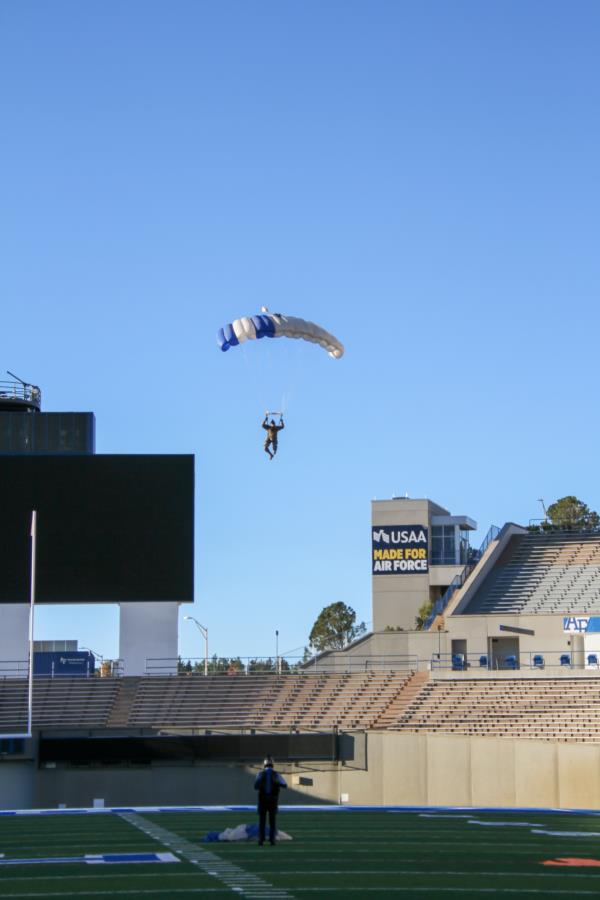 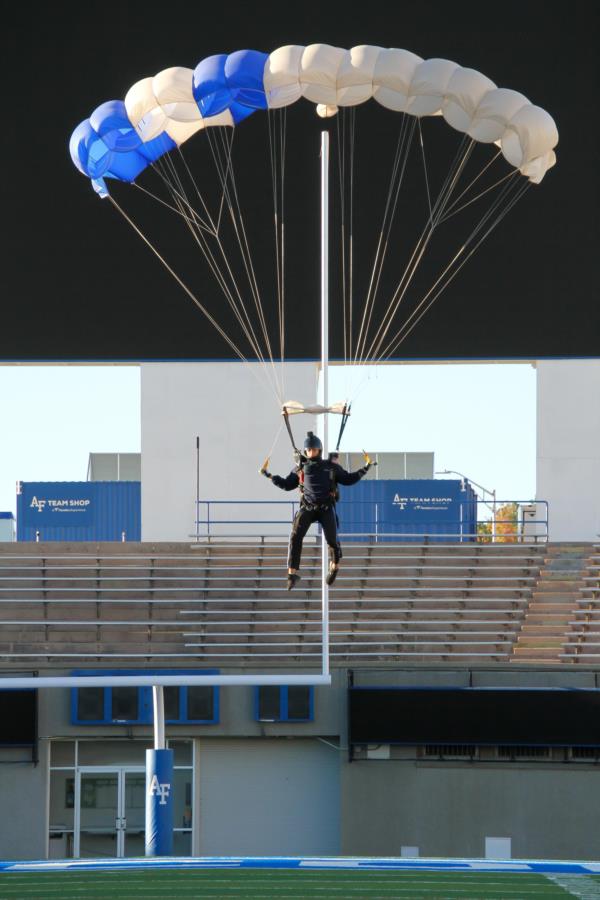 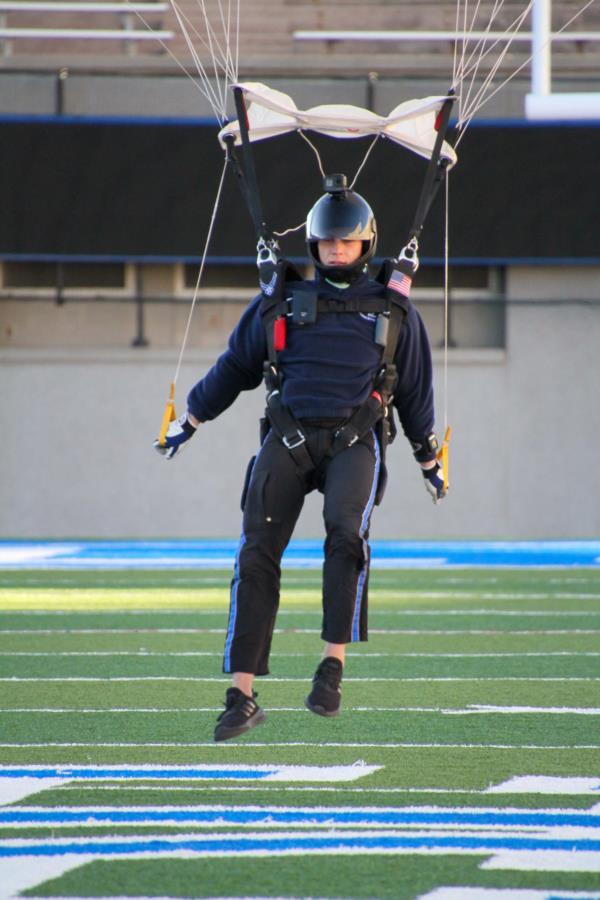 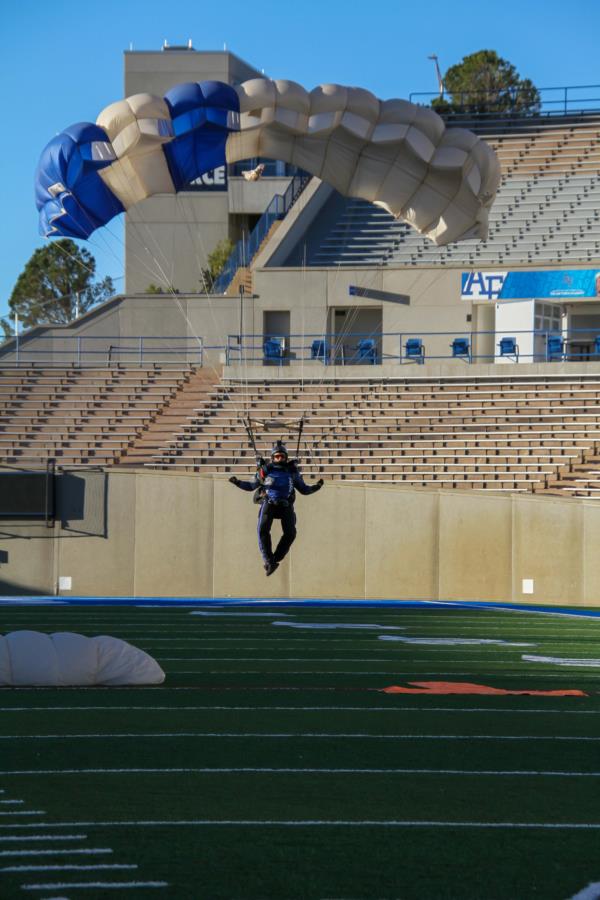 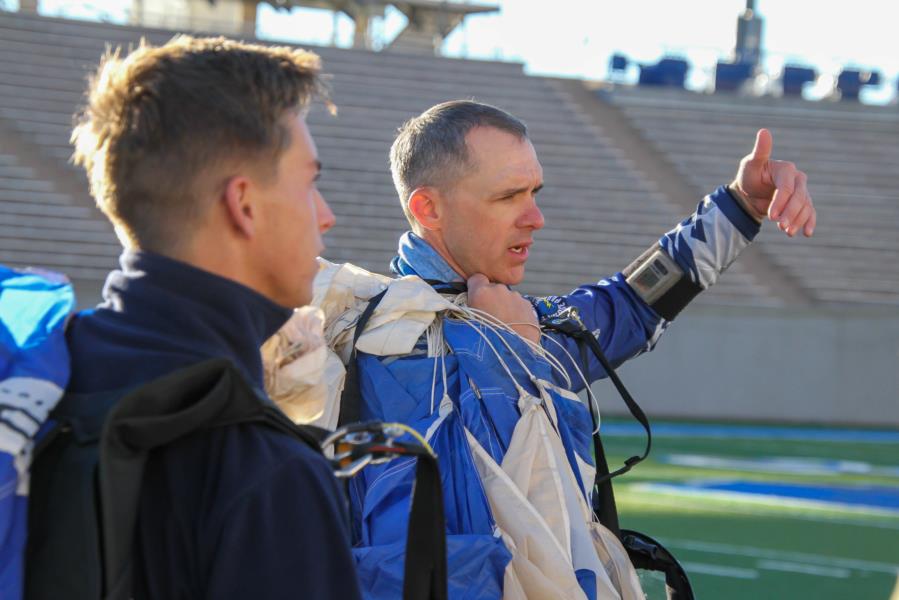 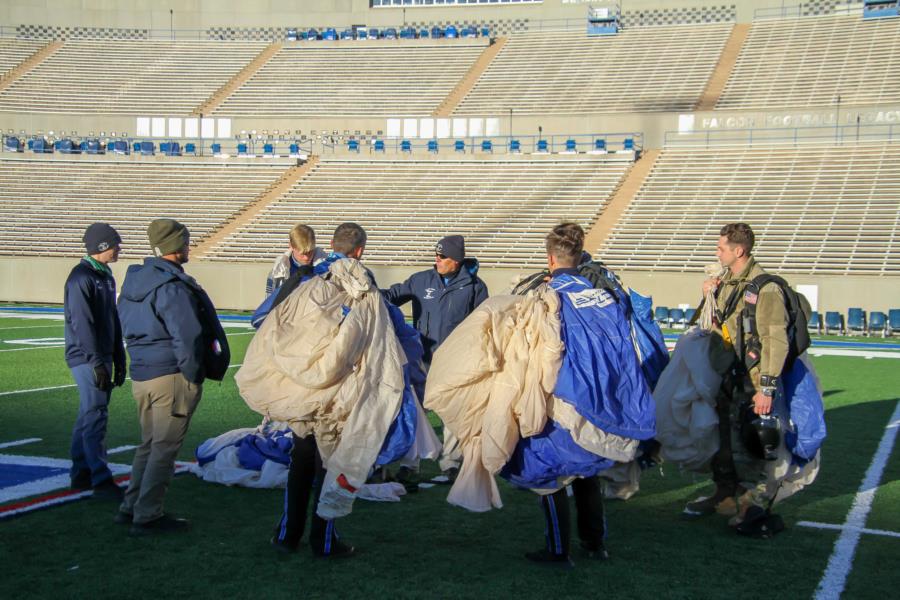 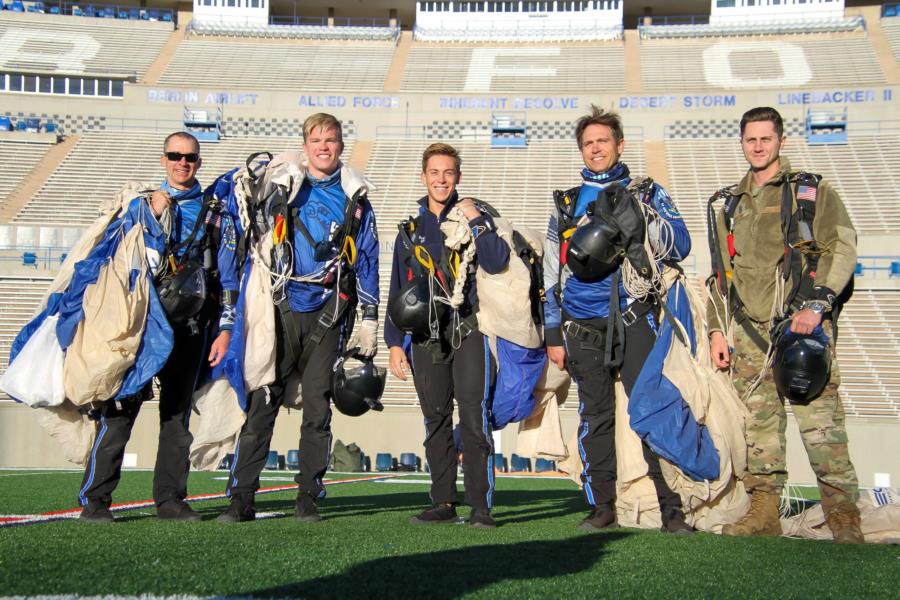 If you plan on watching the Air Force vs. Navy game Saturday, Oct 3, 2020, keep an eye out for the Wings of Blue jumping prior to the start of the game. Go Air Force! Sink Navy!

To view photos of the Stadium Jump practice and of other Wings of Blue training jumps, go to Galleries > Airmanship > Jump or click on the link below.