The first class of 306 men were sworn in at a temporary site at Lowry Air Force Base in Denver, Colorado. Lt. Gen. Hubert R. Harmon, a key figure in the development of the Academy, was recalled from retirement to become the first superintendent. 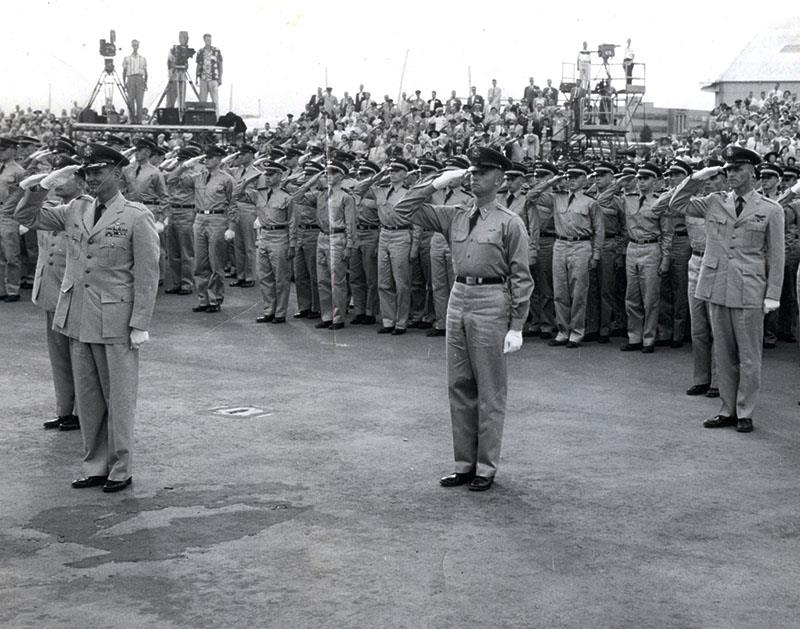 As aviation advanced after the Wright Brothers’ first flight, the nation’s military aviation service followed a constantly growing lineage from 1907 to 1947. Officials discussed the establishment of an aeronautical academy for decades, and when the Air Force became a separate service in 1947 under the National Security Act, plans for the United States Air Force Academy officially got underway.

The plan made little progress until 1949 when Secretary of Defense James Forrestal appointed a board of military and civilian educators. This board, headed by Dwight D. Eisenhower (then Columbia University President) and Robert L. Stearns (University of Colorado President), was tasked to recommend a general system of education for the Army, Navy and Air Force.

The main concern for the Colorado location was if the Rocky Mountains or wind currents would affect flight training. Famed aviator Charles Lindbergh flew over the proposed site and declared it fit for flying. Shortly after, Secretary Talbot selected the Colorado Springs site, and the state of Colorado contributed $1 million toward the purchase of the property.

On July 11, 1955, the same year construction began, the first class of 306 men swore in at a temporary site at Lowry Air Force Base in Denver, Colorado. Lt. Gen. Hubert R. Harmon, a key figure in the development of the United States Air Force Academy, was recalled from retirement to become the first superintendent.

The first class to enter the Academy chose the falcon as the mascot because it possessed characteristics which typify the United States Air Force—speed, graceful flight, courage, alertness and noble carriage. The first class also established the Honor Code, which is a vital segment of cadet life today.

The Academy was ready for occupancy by August 1958. After completing Basic Cadet Training at Lowry, the Class of 1962 was bussed to the north gate and marched five miles up the hill to the newly constructed cadet area. Less than a year later, the Academy received academic accreditation and the first class graduated and was commissioned on June 3, 1959.

As the Cold War continued through the 1950s and into the 1960s, the nation’s reliance on air power as the primary agent of deterrence highlighted the need for more Air Force officers. When the Air Force Academy was approved, cadet strength was set at 2,529, equal to that of West Point. The Naval Academy, however, had been authorized 4,417 midshipmen for many years. On March 3, 1964, President Lyndon Johnson signed Public Law 88-276, which authorized both the Air Force Academy and West Point to expand to the Naval Academy’s strength.

In 1961, the United States Air Force Academy Preparatory School was founded and is currently housed approximately six miles from the cadet area. The “Prep School” was established for applicants who do not receive a direct appointment to the Academy but possess promise as a future cadet. The school prepares cadet candidates academically, athletically and militarily and helps them develop the skills and character necessary to succeed at the Academy.