The quiet days of photo coverage begin, but don't worry because if the schedule goes as planned we will be back with plenty for you to view starting the 4th! Today they are all inside doing testing. In the meantime we thought this would be a great opportunity to educate you on various aspects around the Academy! Today's lesson will be the Terrazzo area.

The main buildings in the Cadet Area surround a large pavilion known as The Terrazzo, designed by landscape architect Dan Kiley. The name comes from the walkway’s terrazzo tiles that are set among a checkerboard of marble strips.

With the building of Sijan Hall on the south side of the Terrazzoin 1968, the Terrazzo area was enclosed, creating a large quadrangle. Only the top of the hill now known as “Spirit Hill,” remains in the central grassy area of the Terrazzo.  At the east end of the Terrazzo are the “Air Gardens”.  700-feet of lighted pools, lowered grass sections, and maze-like walkways. (credit https://www.usafa.edu/academics/facilities/terrazzo/)

On another day we'll get into to buildings, but today we're strictly on memorials and planes.

Instead of having you read about all of the features on the Terrazzo, we thought we'd share some of the Hertiage Minutes that the AOG puts out!

Also on the western end of the Terrazzo you will also find the 9/11 Memorial.

Now onto the east side of the Terrazzo. Here you will find the Eagle and Fledglings Statue, the Air Gardens, and the Memorial Wall. 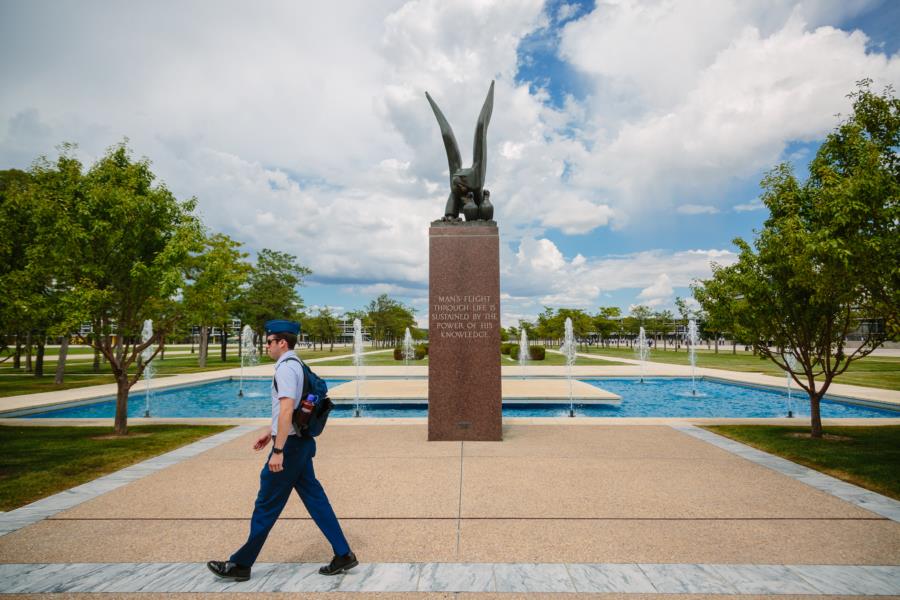 This two-ton statue was given to the Academy by personnel of Air Training Command in 1958. The quotation on it reads, “Man’s flight through life is sustained by the power of his knowledge,’’ by Austin “Dusty’’ Miller. 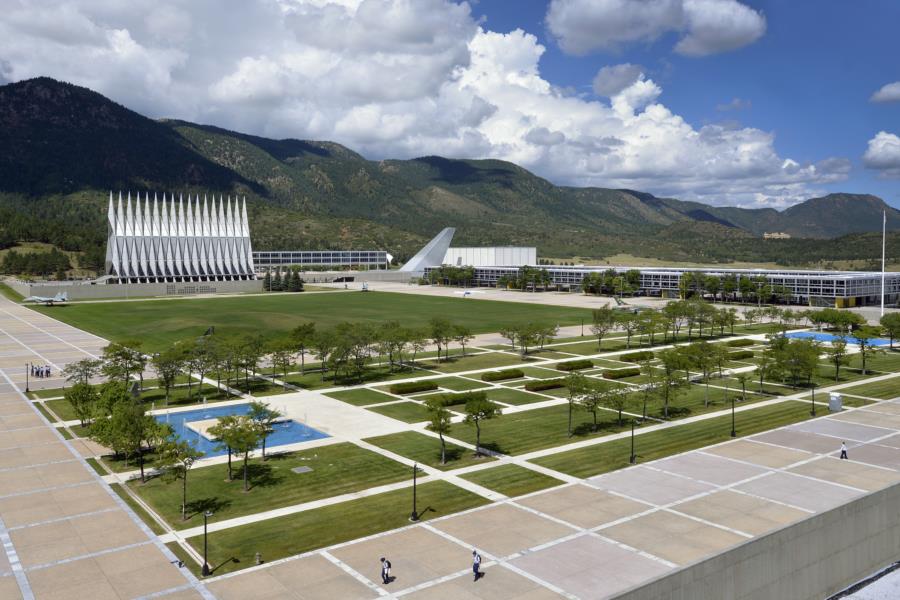 The 27-acre Air Garden, Kiley’s most notable work on the campus, consists of a flat expanse of lawn divided by geometric marble pathways, reflecting pools and two fountains at the north and south ends, with honey locust trees planted at close regular intervals. The garden, restored in the 2000s, unites the flat open space with the low-rise buildings, juxtaposed against the backdrop of dry desert mountains and blue sky. The Cadet Area was designated a National Historic Landmark in 2004. (credit: https://tclf.org/landscapes/united-states-air-force-academy). The pool that you see the Firsties jumping into after they completed their last final is located here at the Air Gardens.

Located on the North End of the Air Gardens

Thank you for participating in our reading and video tour of the Terrazzo area today. We'll be back tomorrow with more Academy history for you!

One last thing, we have another trivia! Be the first person to send an email to webguy@aogusafa.org with the correct answer and we might surprise you with something!

True or False: Brigader General Robert McDermott was the first Dean of the Faculty?