We are in the final stages of the countdown.  The Admissions Office is putting together the bags containing the in-processing packets which will be handed out on I-Day.  There will be a change this year for the Class of 2019.  In past years the Basics wore their ID's from colored lanyards that identifed which BCT squadron they were in.  This year the ID holders are all black.  You can see them in the middle of the table in the photo below.  Never fret though.  Although the holders are all black, they will have colored cards inside that will indicate the squadron, so we all will still be able to tell. 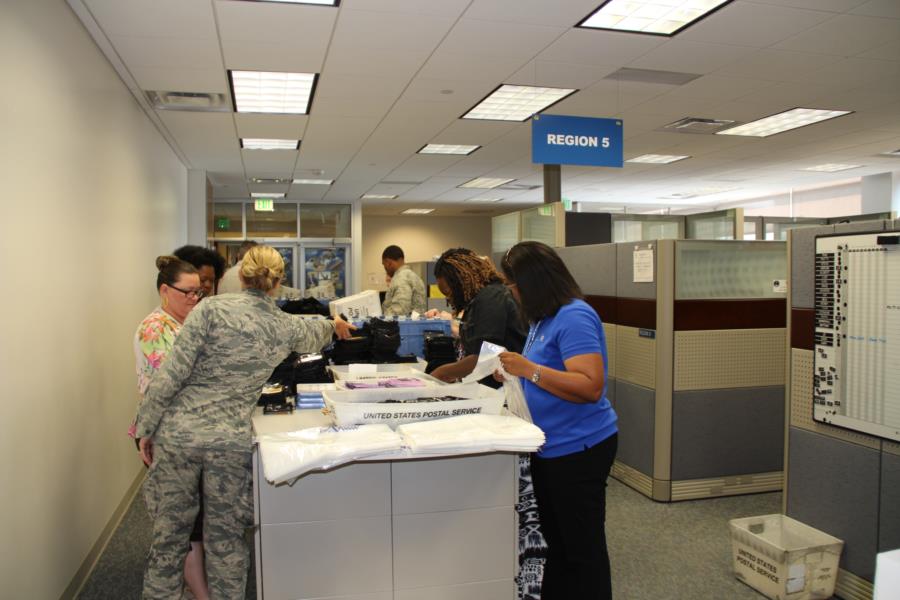 I know many of you are wondering what I-day will be like.  I'll try to walk you through the morning, step by step.

Inprocessing begins about 0700. The Appointees arrive at the Association of Graduates Headquarters, named Doolittle Hall according to their BCT Squadron.   By the way, we will have about 10 photographers deployed that day.  We will all have on gray shirts that say WebGuy on them.  We will also have cameras :-).  Be sure and stop for a family photo opp when you arrive. 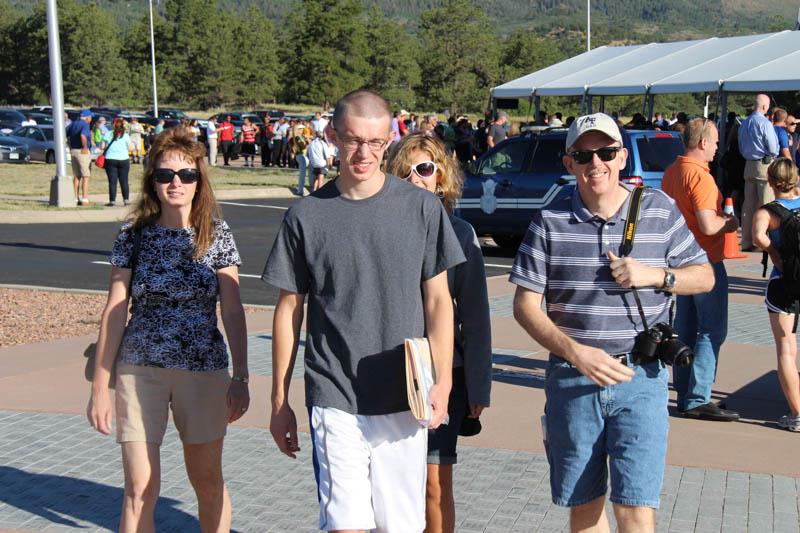 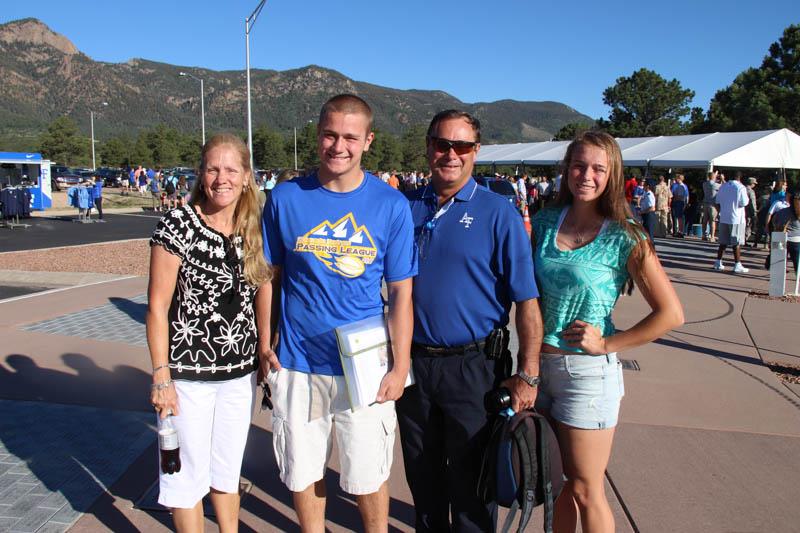 Appointees wait in line on the sidewalk to the south of the building. With the staggered reporting times, the wait isn't too long now.  Make sure you wear sunblock.  You will need it. 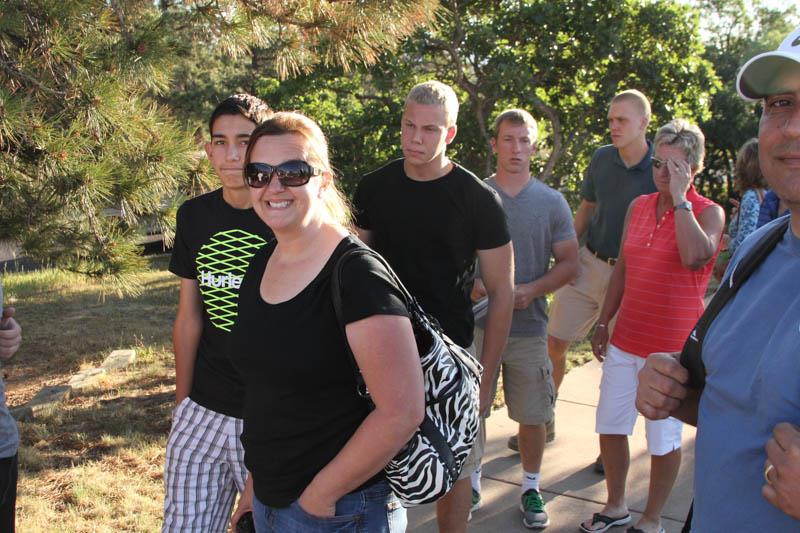 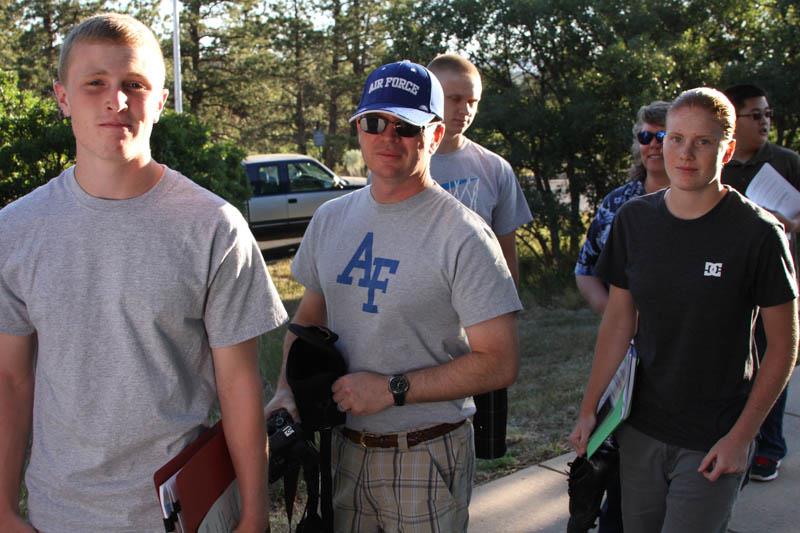 Once the appointees reach the front of the line, groups of 50 - 75 step under a canopy in front of the building to receive their first "welcome", from one of the senior leaders of the Academy and the Association of Graduates.  This stop only takes a few minutes.  After that, appointees and parents go inside Doolittle Hall. 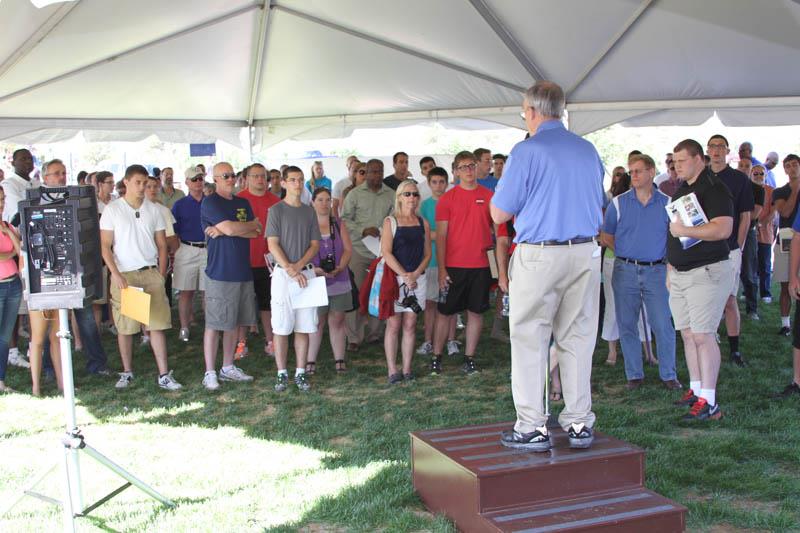 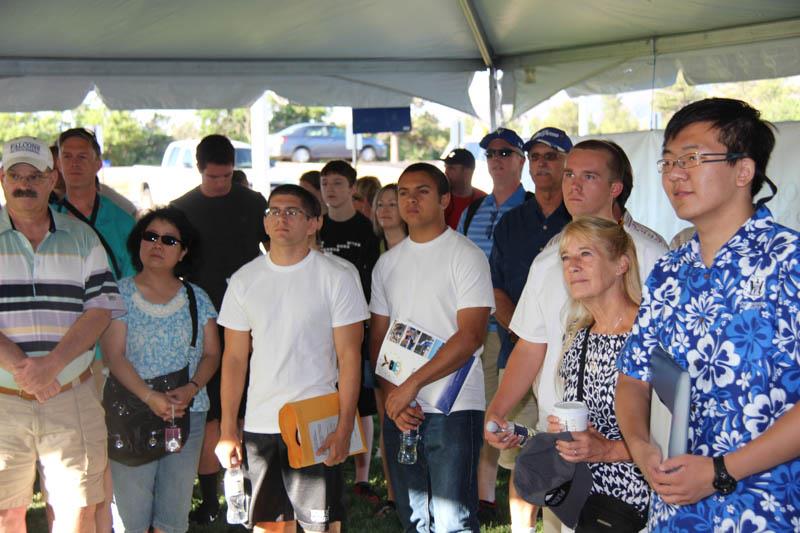 Once inside, the appointees go through the elevator to wrap around and head up the stairwell.  Parents move into the large Assembly Room on the first floor, where the Academy has set up numerous information tables for the appointees and parents to answer any last minute questions. Also, the AOG usually provides some cookies, coffee, etc., for people to nibble on. 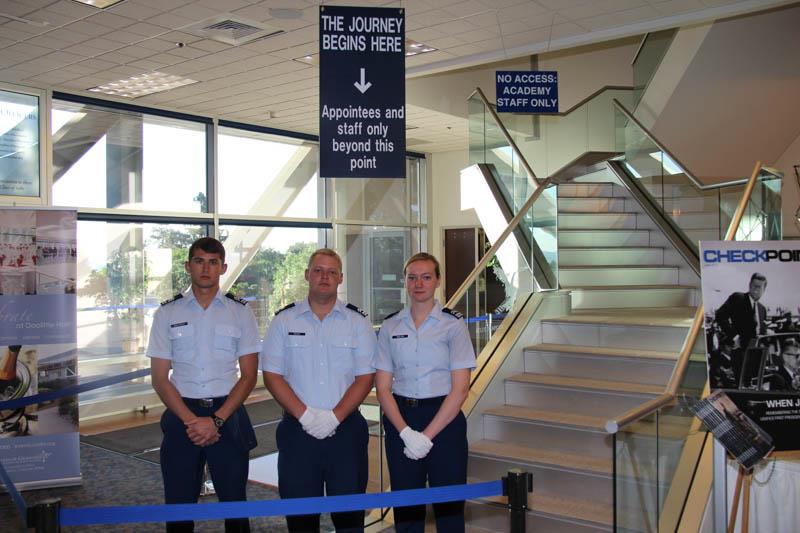 At the top of the stairs, the appointees sign-in, get their in-processing packets and get started. The time the appointee spends upstairs is relatively brief since most of their info was submitted via their online admissions portal. 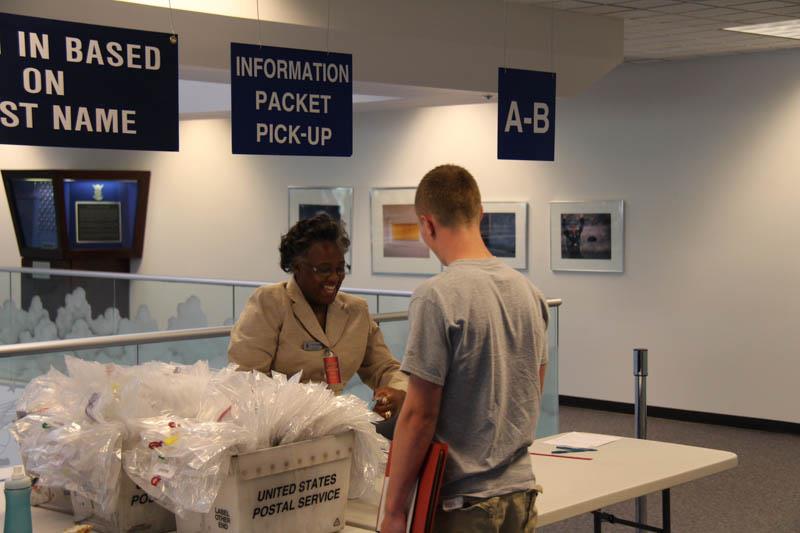 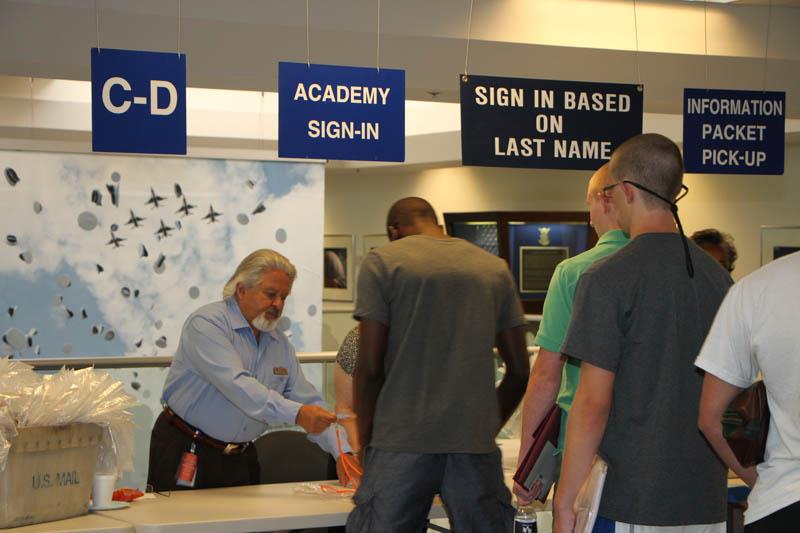 The appointees step over to another station to get the combination to their Post Office Box. After that, they move over to wait for a briefing. 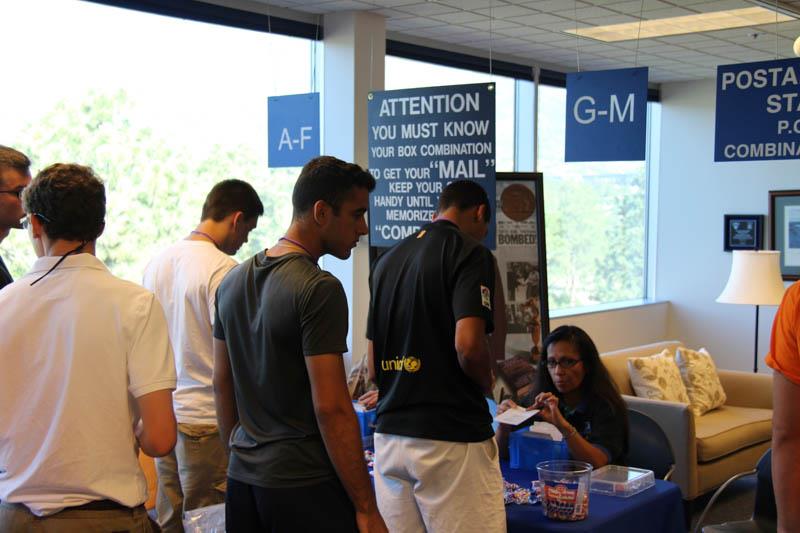 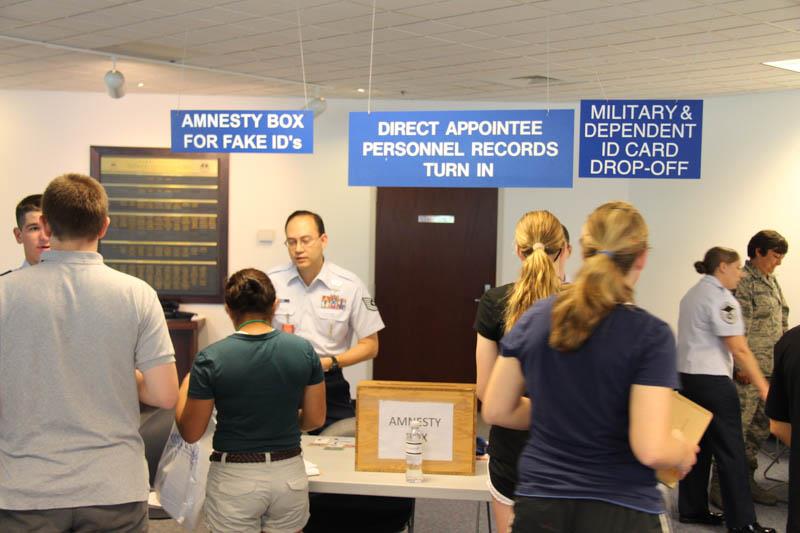 After they finish the briefing, they head across the 2nd floor and come down the stairwell at the other side of the room. Sometimes families will wait around inside for the basics to come down the south stairwell. 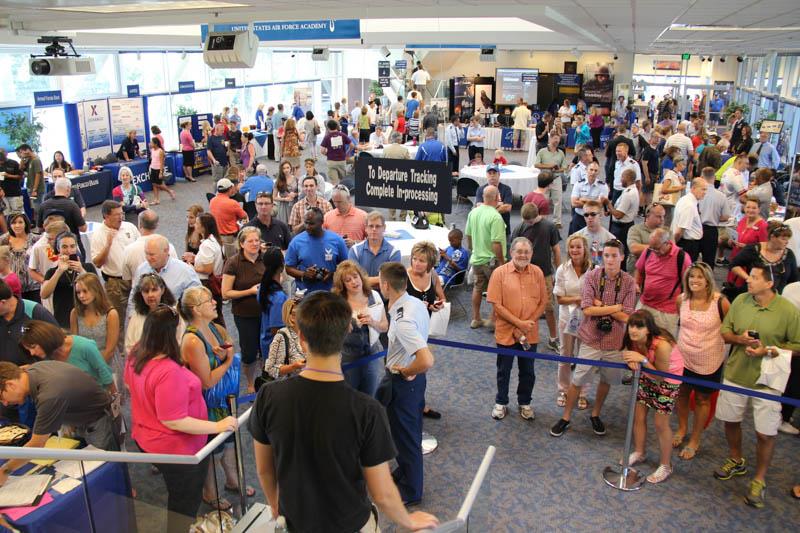 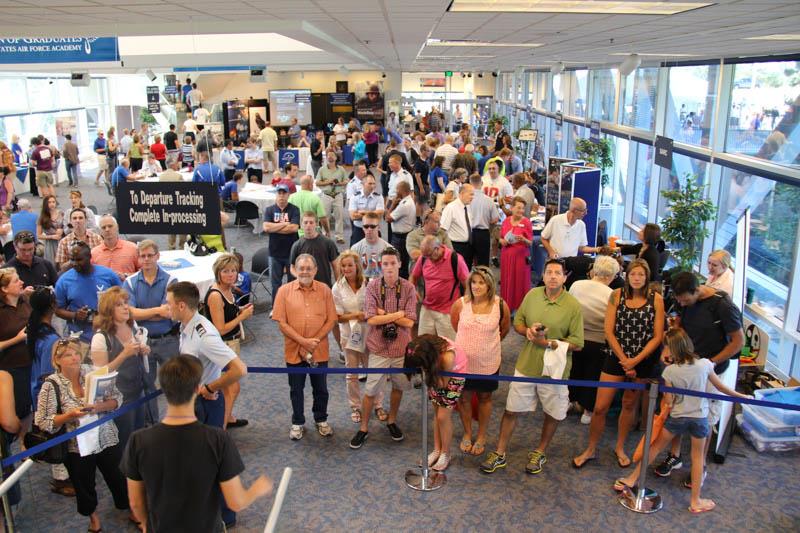 After they come down the stairs, they head out the south door, are "Scanned in" to the system. This allows the Academy to know where the Basics are in the Inprocessing Line.

Next, the Basics exit the rear of Doolittle Hall, walk down the stairs adjacent to the patio, and meet up on the Heritage Trail. Once on the trail, they first stop at a replica of the War Memorial, funded by the Class of 1970. This Memorial contains the names of all USAF Academy graduates who have given their lives in battle. 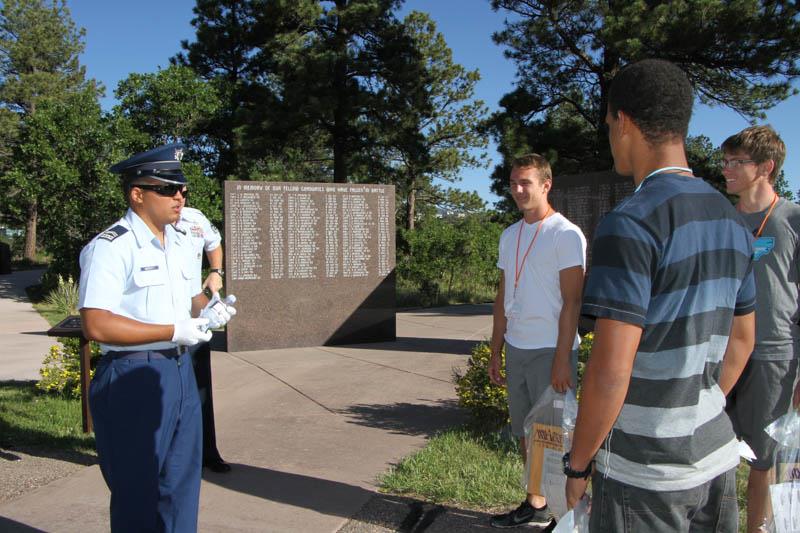 After the War Memorial, the Basics walk to the Challenge Bridge that was funded by the first Academy Class, the Class of 1959. A member of the 1959 Class will meet and talk with the Basics, and have one of the Basics read the Challenge:\

To Each Entering Cadet:

The path to which you aspire has been consecrated by the blood of heroes and paved with the selfless service of countless men and women like you.

If you would be worthy of this heritage:

Make integrity the bedrock of your life.
Let your actions be guided by an unshakable sense of duty, self-discipline and personal responsibility.
Become a lifelong student of history, war, humanity and leadership.
Be prepared to sacrifice everything to defend the principles upon which our nation was founded.
Cross this bridge with the determination to live a life that will make all who went before proud of you. 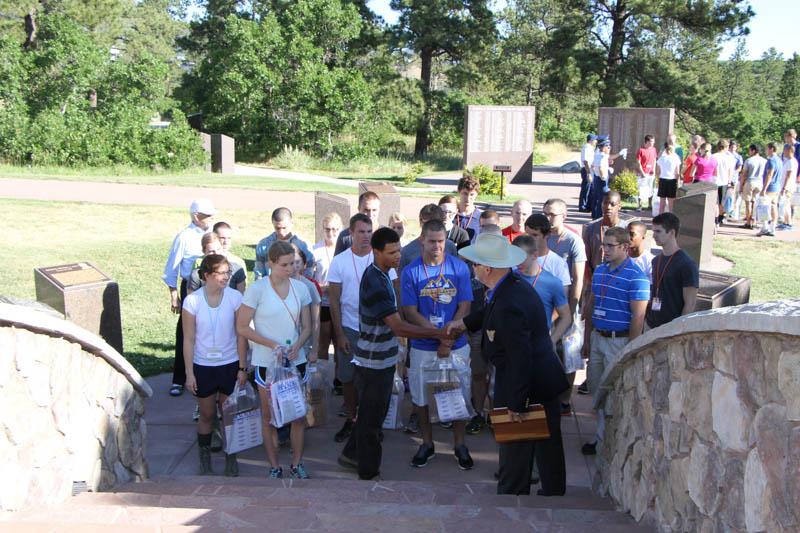 After this, the Basics cross over the bridge, continue on the trail, and get on the buses waiting at the top of the trail. 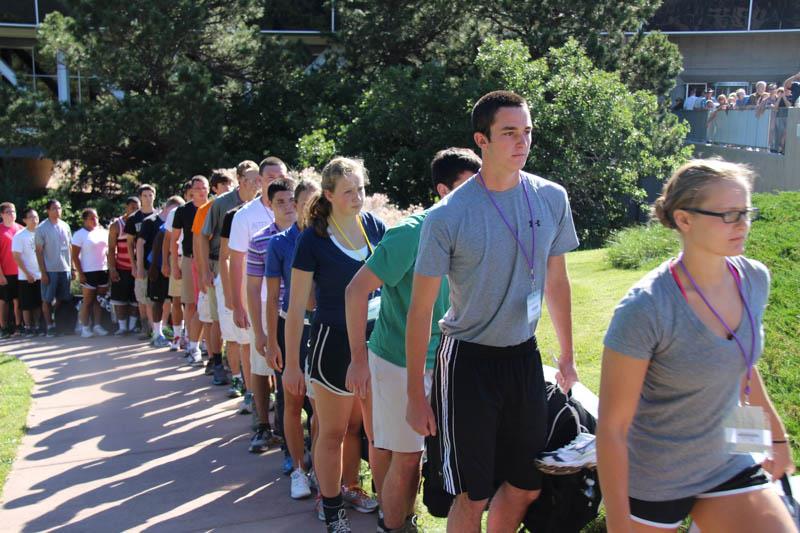 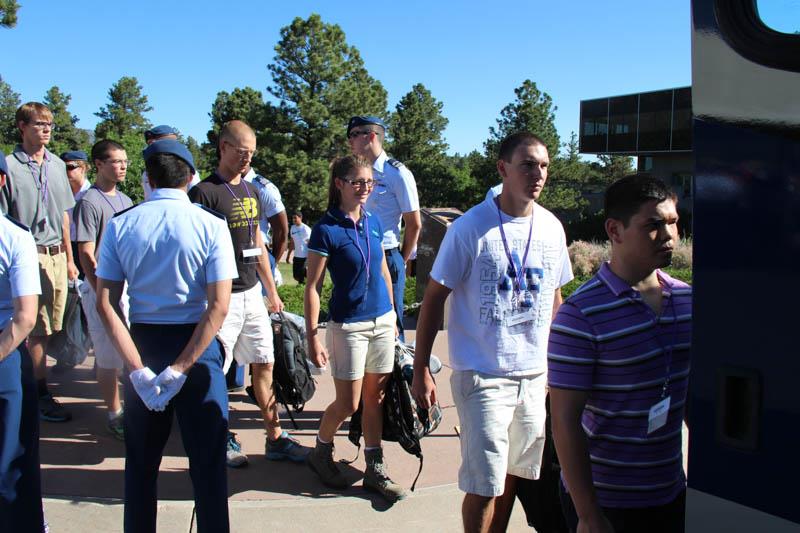 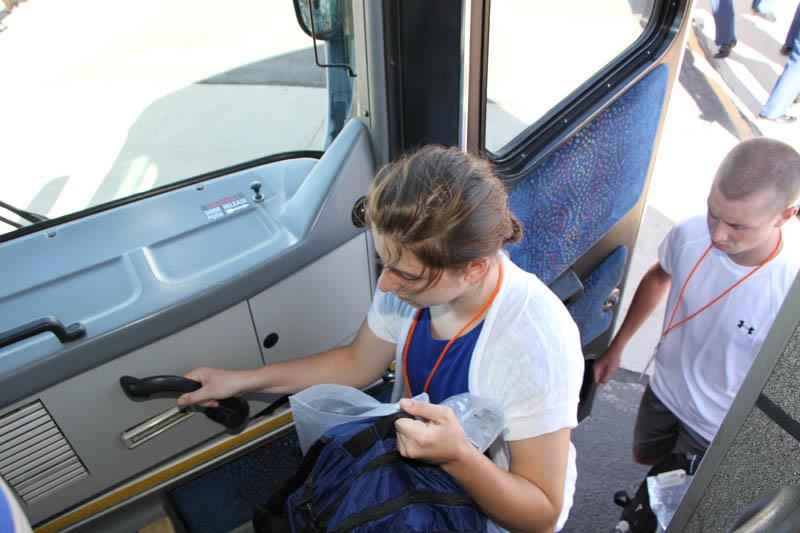 Once on the bus, the Parents wave goodbye one last time. 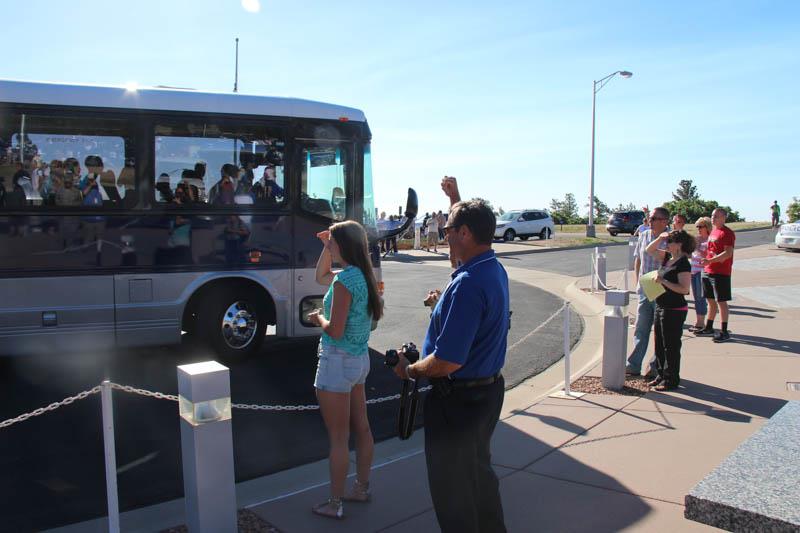 I will have more photos and info between now and Thursday, so you can see how we are getting ready.